The bill passed early Saturday on a near party-line vote and would steer cash to individuals, businesses and states battered by COVID-19. 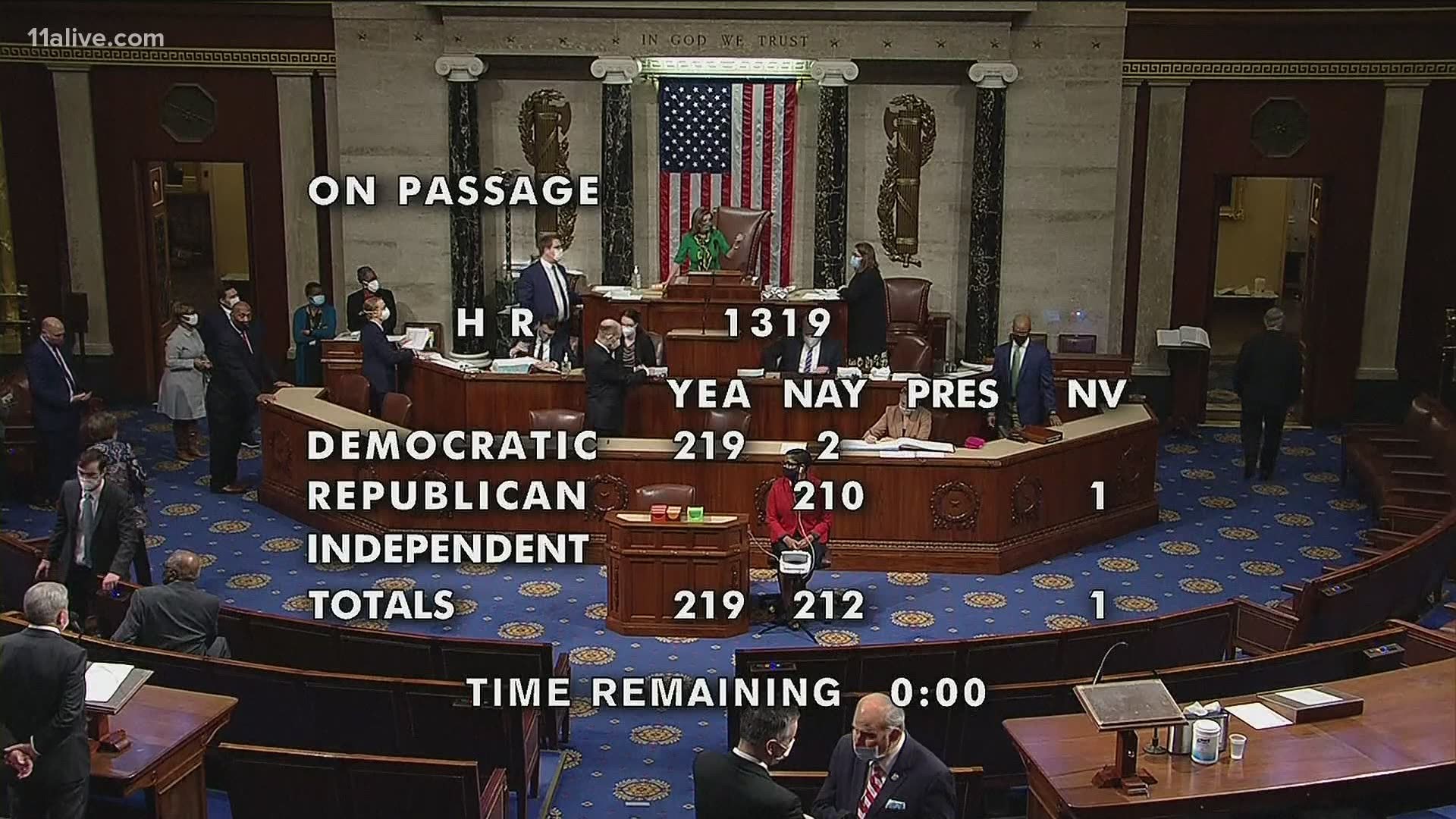 WASHINGTON — The House approved a $1.9 trillion pandemic relief bill that was championed by President Joe Biden, the first step in providing another dose of aid to a weary nation as the measure now moves to a tense Senate.

“We have no time to waste,” Biden said at the White House after the House passage early Saturday. "We act now — decisively, quickly and boldly — we can finally get ahead of this virus. We can finally get our economy moving again. People in this country have suffered far too much for too long.”

The new president’s vision for infusing cash across a struggling economy to individuals, businesses, schools, states and cities battered by COVID-19 passed on a near party-line 219-212 vote. That ships the bill to the Senate, where Democrats seem bent on resuscitating their minimum wage push and fights could erupt over state aid and other issues.

Democrats said that mass unemployment and the half-million American lives lost are causes to act despite nearly $4 trillion in aid already spent fighting the fallout from the disease. GOP lawmakers, they said, were out of step with a public that polling finds largely views the bill favorably.

“I am a happy camper tonight," Rep. Maxine Waters, D-Calif., said Friday. “This is what America needs. Republicans, you ought to be a part of this. But if you're not, we're going without you."

RELATED: Who gets $1,400 checks in the COVID bill the House just passed?

The battle is also emerging as an early test of Biden's ability to hold together his party's fragile congressional majorities — just 10 votes in the House and an evenly divided 50-50 Senate.

At the same time, Democrats were trying to figure out how to assuage liberals who lost their top priority in a jarring Senate setback Thursday.

That chamber's nonpartisan parliamentarian, Elizabeth MacDonough, said Senate rules require that a federal minimum wage increase would have to be dropped from the COVID-19 bill, leaving the proposal on life support. The measure would gradually lift that minimum to $15 hourly by 2025, doubling the current $7.25 floor in effect since 2009.

Hoping to revive the effort in some form, Senate Majority Leader Chuck Schumer, D-N.Y., is considering adding a provision to the Senate version of the COVID-19 relief bill that would penalize large companies that don't pay workers at least $15 an hour, said a senior Democratic aide who spoke on condition of anonymity to discuss internal conversations.

That was in line with ideas floated Thursday night by Sens. Bernie Sanders, I-Vt., a chief sponsor of the $15 plan, and Senate Finance Committee Chair Ron Wyden, D-Ore., to boost taxes on corporations that don't hit certain minimum wage targets.

RELATED: VERIFY: Who is the Senate parliamentarian?

House Speaker Nancy Pelosi, D-Calif., offered encouragement, too, calling a minimum wage increase “a financial necessity for our families, a great stimulus for our economy and a moral imperative for our country.” She said the House would “absolutely" approve a final version of the relief bill because of its widespread benefits, even if it lacked progressives’ treasured goal.

While Democratic leaders were eager to signal to rank-and-file progressives and liberal voters that they would not yield on the minimum wage fight, their pathway was unclear because of GOP opposition and questions over whether they had enough Democratic support.

House Ways and Means Committee Chair Richard Neal, D-Mass., sidestepped a question on taxing companies that don't boost pay, saying of Senate Democrats, “I hesitate to say anything until they decide on a strategy."

Progressives were demanding that the Senate press ahead anyway on the minimum wage increase, even if it meant changing that chamber's rules and eliminating the filibuster, a tactic that requires 60 votes for a bill to move forward.

“We’re going to have to reform the filibuster because we have to be able to deliver,” said Rep. Pramila Jayapal, D-Wash.

Rep. Alexandria Ocasio-Cortez, D-N.Y., another high-profile progressive, also said Senate rules must be changed, telling reporters that when Democrats meet with their constituents, "We can’t tell them that this didn’t get done because of an unelected parliamentarian.”

Traditionalists of both parties — including Biden, who served as a senator for 36 years — have opposed eliminating filibusters because they protect parties' interests when they are in the Senate minority. Biden said weeks ago that he didn't expect the minimum wage increase to survive the Senate's rules. Democrats narrowly hold Senate control.

Pelosi, too, seemed to shy away from dismantling Senate procedures, saying, “We will seek a solution consistent with Senate rules, and we will do so soon.”

The House COVID-19 bill includes the minimum wage increase, so the real battle over its fate will occur when the Senate debates its version over the next two weeks.

Democrats are pushing the relief measure through Congress under special rules that will let them avoid a Senate GOP filibuster, meaning that if they are united they won't need any Republican votes.

It also lets the bill move faster, a top priority for Democrats who want the bill on Biden's desk before the most recent emergency jobless benefits end on March 14.

But those same Senate rules prohibit provisions with only an “incidental” impact on the federal budget because they are chiefly driven by other policy purposes. MacDonough decided that the minimum wage provision failed that test.

Republicans oppose the $15 minimum wage target as an expense that would hurt businesses and cost jobs.