Impeachment articles announced against Trump for abuse of power, obstruction of Congress 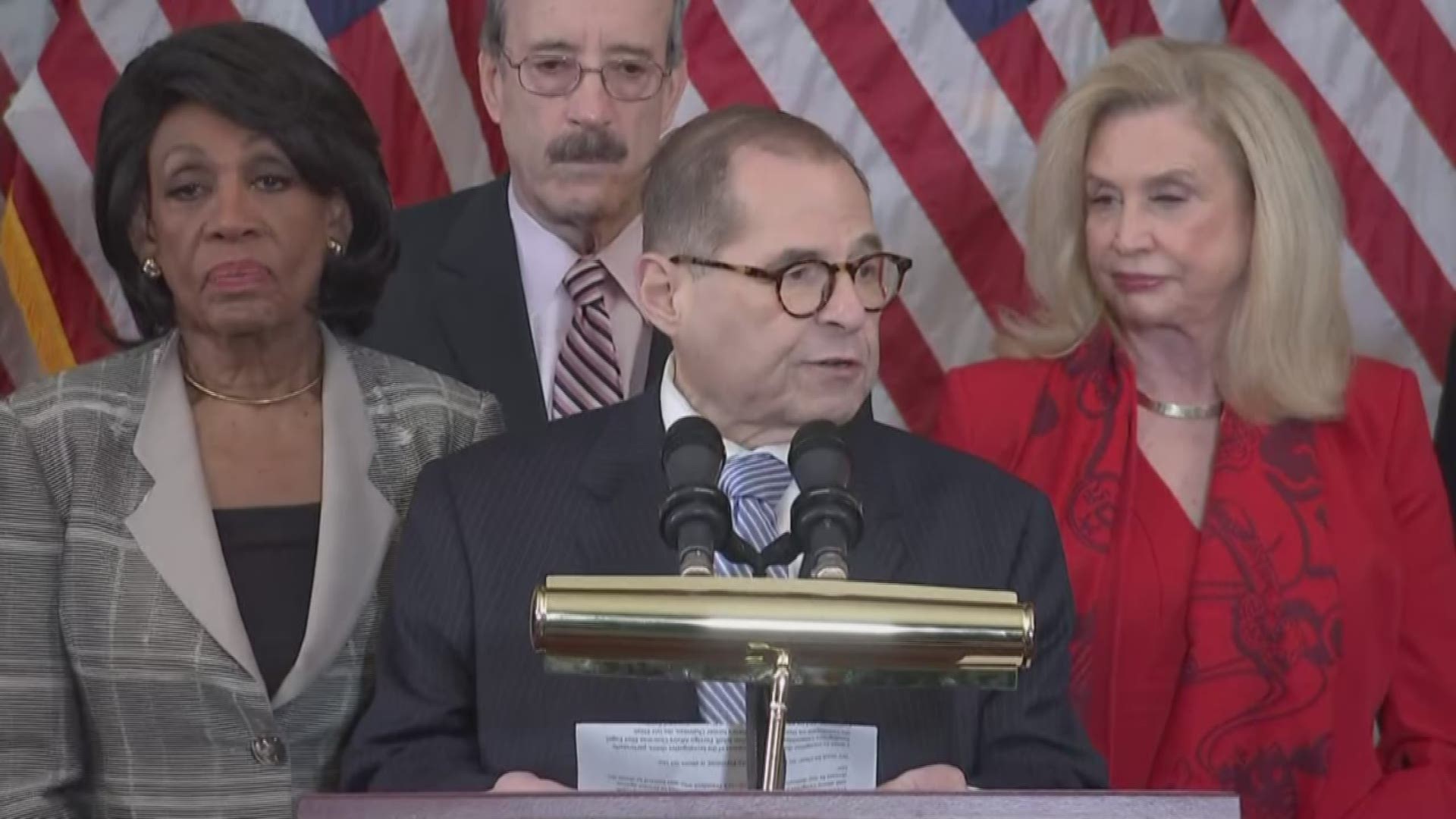 Democrats have announced two articles of impeachment charging President Donald Trump with abuse of power and obstruction of Congress.

The charges announced Tuesday stem from Trump's pressure on Ukraine to announce investigations of his political rivals as he withheld aid to the country. The case against Trump was laid out at a daylong House Judiciary Committee hearing on Monday.

"It is an impeachable offense for the president to exercise the powers of his public office to obtain an improper personal benefit while ignoring or injuring the national interest, Judiciary Committee Chair Rep. Jerrold Nadler said of Trump's charge of abuse of power. "That is exactly what president trump did when he solicited and pressured Ukraine to interfere in our 2020 presidential election." Nadler said."

A second article was announced against Trump for obstruction of Congress.  "A president who declares himself above accountability, above the American people and above congress' power of impeachment — which is meant to protect against threats to our democratic institutions — is the President who sees himself as above the law," Nadler said.

RELATED: Pelosi asks for articles of impeachment against President Trump

The process would then move to the Senate in January. It would be presided over by Supreme Court Chief Justice John Roberts. House members would act as prosecutors. The White House would, presumably, provide a defense -- although it has thus far declined invitations to appear at House proceedings.

The senators would be the jury. If two-thirds of the senators vote to convict, then Trump could be removed from office. That would require 20 Republicans to vote in favor of conviction, assuming every Democrat and independent also do so -- a result that appears unlikely given how partisan the inquiry has been.

"We stand here today because the President's continuing abuse of power has left us no choice," House Intelligence Chair Adam Schiff said during the press conference. "To do nothing would make ourselves complicit in the President's abuse of his high office, the public trust and our national security."

“The announcement of two baseless articles of impeachment does not hurt the President, it hurts the American people, who expect their elected officials to work on their behalf to strengthen our Nation, White House Press Secretary Stephanie Grisham said in a statement. "The President will address these false charges in the Senate and expects to be fully exonerated, because he did nothing wrong."

“Ultimately, Speaker Pelosi and House Democrats will have to answer to their constituents for manufacturing an impeachment inquiry and forcing unfounded accusations down the throats of the American people," she added.

During Judiciary Committee hearings in the past week, opponents of impeachment cautioned against proceeding through the process so hastily.

“If you impeach a president, if you make a high crime and misdemeanor out of going to the courts, it is an abuse of power. It’s your abuse of power," Professor Jonathan Turley said during his testimony with three other constitutional law professors. "You are doing precisely what you’re criticizing the president for doing.” 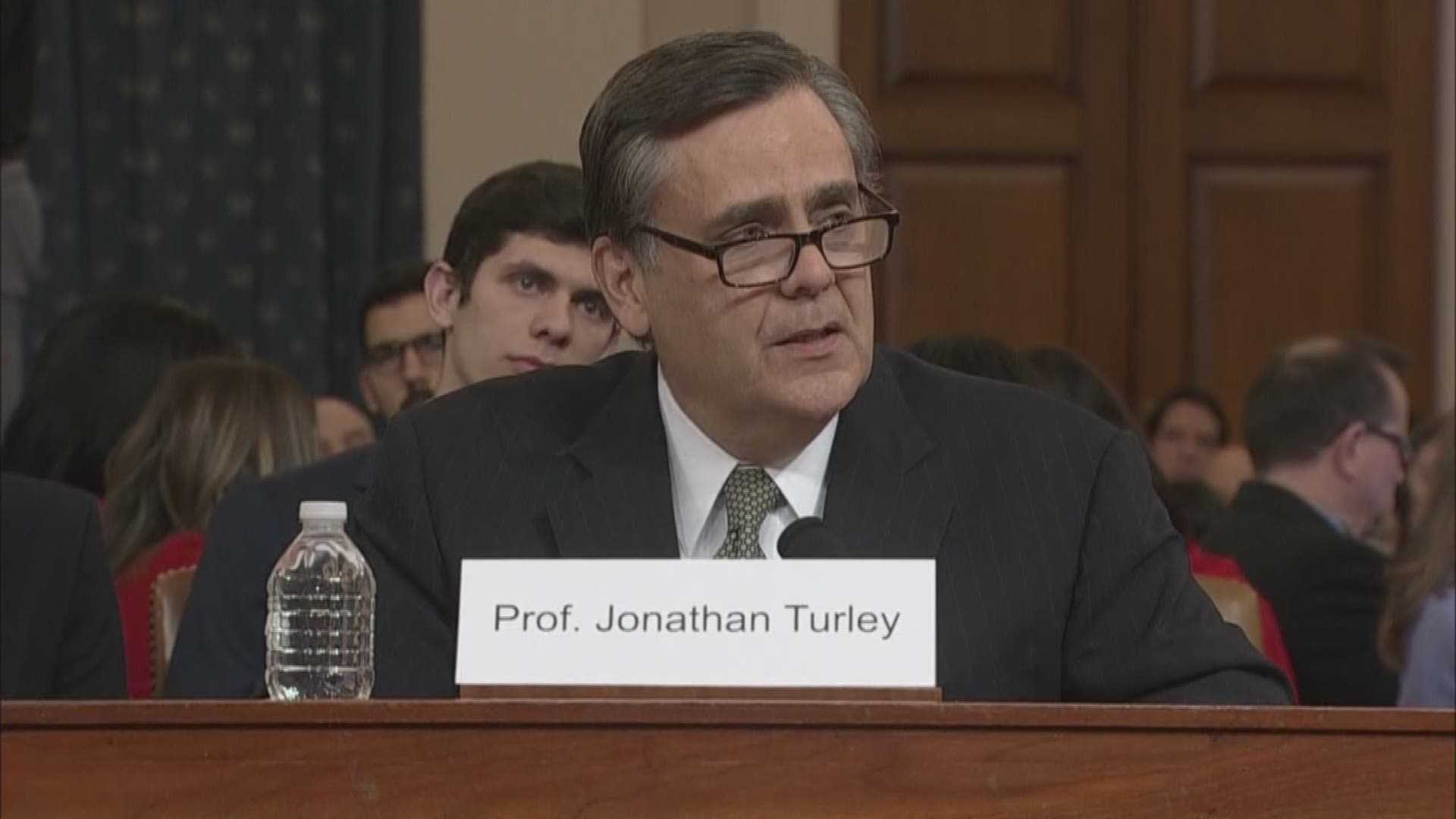 Turley made it clear in his opening remarks that he was not a supporter of the president and voted against him in the 2016 election. However, he argued the Ukraine controversy was not enough to impeach Trump.

With the 2020 election coming up, Schiff said during the press conference that Democrats could not wait for courts to compel witnesses to testify and more documents to be procured, because of the risk that Trump could "cheat in just one more election."

It was 21 years ago this month that the House impeached President Bill Clinton. Articles of impeachment were presented on December 11 and 12, 1998. Two of the four articles were passed on December 19.