After her defeat in the Georgia governor's race, Democrat Stacey Abrams said her political career is 'certainly' not over. 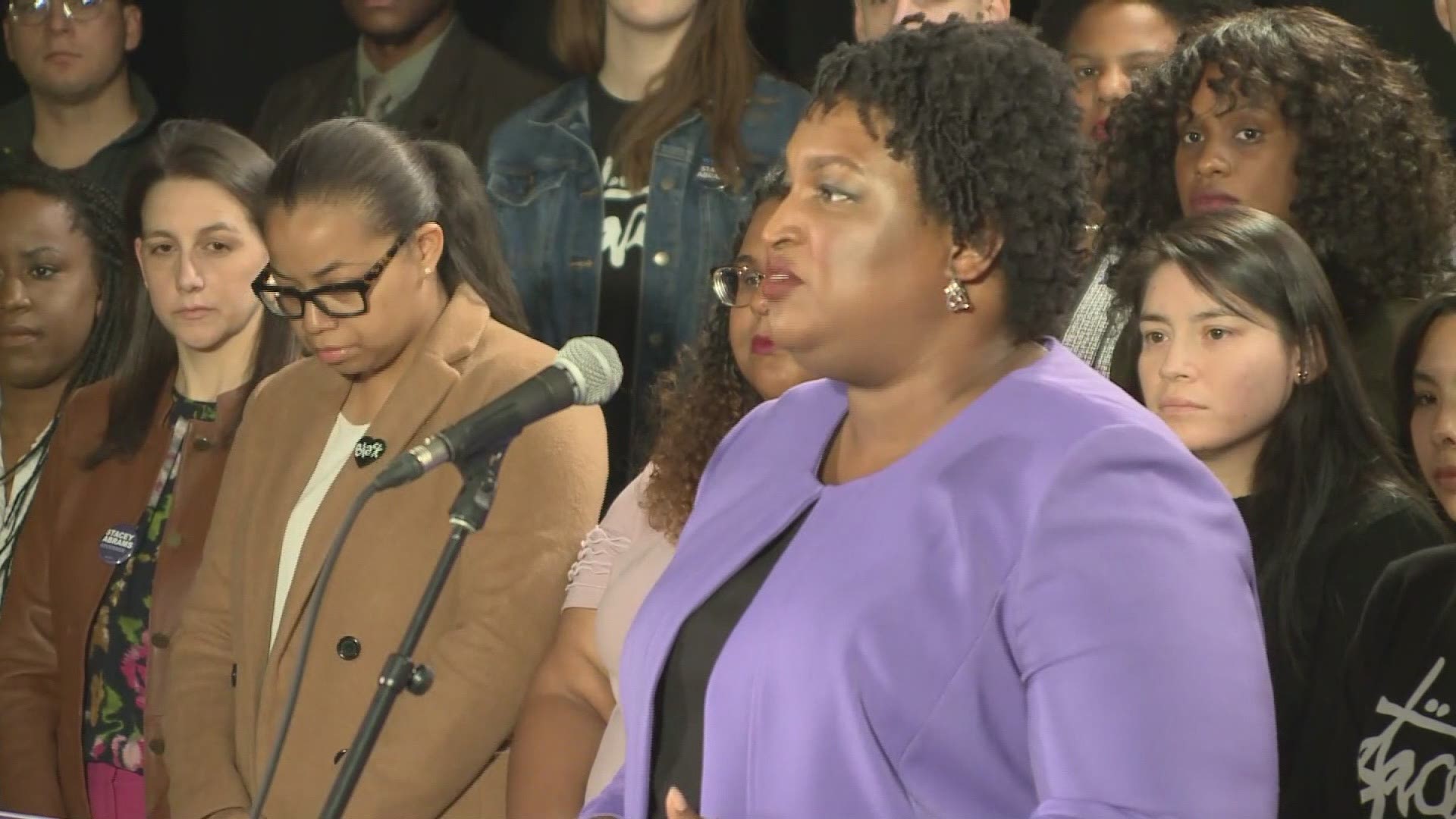 ATLANTA — Stacey Abrams, the charismatic Georgia Democrat who came up short last month in her bid to become the first black woman governor in the nation, plans to run again for office – perhaps as soon as 2020.

The Yale-trained lawyer won the most votes of any Democratic candidate in Georgia history, but lost the bitterly fought election to Republican Secretary of State Brian Kemp by 1.39 percentage points. Kemp is to be sworn in as governor in January.

Abrams, 45, told USA TODAY she is considering her options.

One possibility: The Senate. Sen. David Perdue, a first-term Republican, comes up for reelection in 2020. Abrams has a decade of legislative experience as a member of the Georgia House of Representatives.

“I will certainly run for office again,” Abrams said. "My responsibility is to make certain whatever I run for, I am the best person for the job.”

Until then, she said, she plans to work for election reform through Fair Fight Action, the new organization she chairs, and to remain active in civic affairs as a private citizen.

Abrams is one of several Democrats considering their futures after November losses.

Rep. Beto O'Rourke, who failed to unseat Republican Sen. Ted Cruz in deep red Texas, and Tallahassee Mayor Andrew Gillum, who lost the Florida governor's race to Rep. Ron DeSantis, are both said to be mulling runs for the White House.

Abrams said she sees a path forward. Her campaign was notable for its liberal messaging and its aggressive get-out-the-vote efforts with the young and minorities.

Kemp called Abrams too extreme for Georgia. But she came closer to being elected governor than any Democrat in 20 years.

“I think our campaign was reflective of a new blueprint for how you can win in the South," Abrams said. “We have demonstrated that it’s entirely possible to activate communities that are typically left out of our politics.”

She suggests Abrams could run for governor in 2022, or for the House seat held by Rep. John Lewis should the civil rights icon retire.

“She has helped to dispel the myth that blacks are not viable candidates in the Deep South," Gillespie said.

University of Georgia political scientist Charles Bullock said Abrams made unforced errors during her first run for statewide office – as when she said the state should remove the carvings of the Confederate leaders Jefferson Davis, Stonewall Jackson and Robert E. Lee from Stone Mountain.

"I didn’t think she needed to say that at the time," Bullock said. "And it may have turned off some voters who may have otherwise supported her."

Abrams maintains that the state mismanaged the midterm election. She and her supporters accused Kemp, as secretary of state, of suppressing the minority vote.

Kemp has rejected charges he suppressed the vote. His office said it conducted "maintenance of the voter rolls to ensure election integrity." His campaign credited Kemp for record voter registration and early voter turnout.

Abrams never conceded the race. Down by tens of thousands of votes on election night, her campaign and supporters filed a series of legal challenges aimed at getting more ballots counted, in hopes of reducing the margin and forcing a recount or a runoff.

Their efforts were partially successful:Judges ordered hundreds of rejected ballots to be counted. But it wasn't enough to change the outcome.

Ten days after the election, Abrams acknowledged that she would not win, and dropped any further legal action. In an address that she said was not a concession speech, she announced the formation of Fair Fight Action.

Abrams is chairing the organization; it's run by Lauren Wroh-Gargo, her campaign manager.

Fair Fight Action filed its first lawsuit in November asking a federal judge to order fixes to what it says are deep-seated problems in the state's election system.

Abrams said she expects Fair Fight Action will file more lawsuits. She said the effort is essential because gains for black, minority and young voters could be reversed by state elections officials.

She said she doesn't want to see voters "return to believing that their voices don’t matter.”

The Office of the Georgia Secretary of State, which oversees elections in the state, did not immediately respond to a request for comment.

Fair Fight Action also wants individual counties to be held accountable for how they administer elections. Abrams said many counties appeared to be following independent rules that caused voters to be treated differently depending on where they lived and voted.

Fair Fight Action has been soliciting testimonials from voters who experienced problems voting in the midterm election and posting them on its website. Organizers say this is a way to showcase the need for reform in Georgia's election system.

After her loss, Abrams focused her attention on backing Democrat John Barrow in his run for Georgia Secretary of State. Barrow was defeated in a runoff last week by Republican Brad Raffensperger.

Abrams said she is concerned about the direction of the state under Kemp as governor.

“I deeply disagreed with Kemp on a host of issues, and those disagreements don’t disappear,” Abrams said.

Abrams said she plans to continue being involved in public policy and politics even as a private citizen.

She said she hopes her candidacy, particularly as a black woman, inspired people across all races and genders to run for office.