Glynn County officers were attempting to search Arbery's parked car. As Arbery argued with the officers, one of them attempted to tase him. 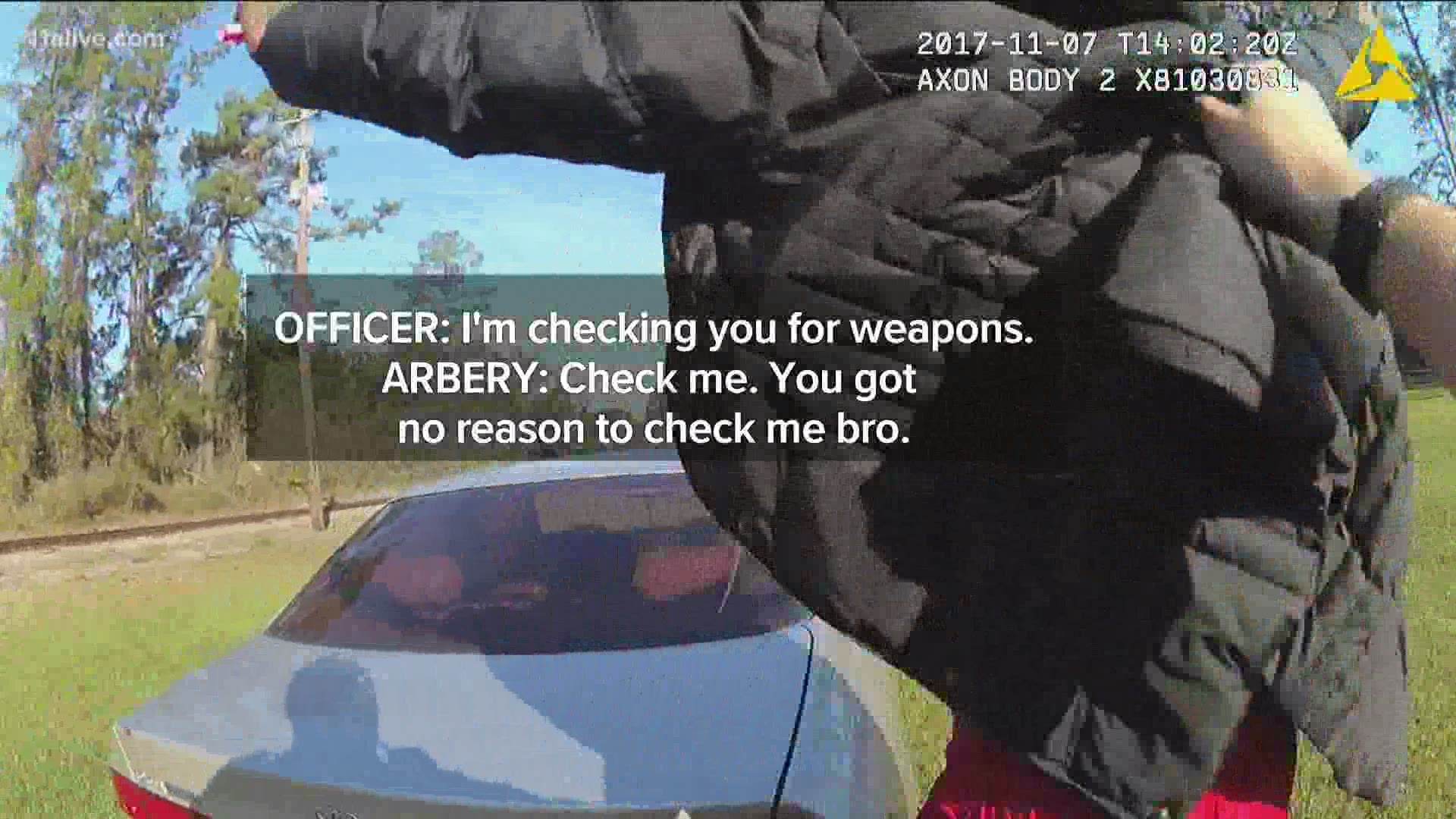 SAVANNAH, Ga. — A video released Monday shows police in Georgia attempting to search Ahmaud Arbery's parked car in 2017 and when he refuses and attempts to walk back to the vehicle an officer tried to tase him.

The video, first obtained by The Guardian, shows Arbery refusing Glynn County police when they ask to search his Toyota and as he walks toward his vehicle he is told “don't reach the car” and “keep your hands out your pockets.”

As Arbery backs away from the car, he's told to take his hands out his pockets. Arbery does this and puts his arms out to his sides. Then, the sound of the taser can be heard. It's clear the taser is malfunctioning as Arbery continues to stand with no reaction. Eventually, he goes to the ground under his own power after being ordered to.

When Arbery questions why the cops are bothering him he was told that the area is known for drugs, a suggestion that agitates Arbery who said he is not on drugs and to check his “s—-!” Officers then proceed to check him for weapons while clarifying this action was not a search, but a check.

In a police report, also obtained by The Guardian, officers said Arbery, who was parked when confronted by officers, was free to go but could not take his vehicle because his license was suspended. The report said that after he left the scene they noticed Arbery's passenger side window was open and that they smelled what they believed to be marijuana and noticed a bag with a leafy substance inside.

Calls and emails to the Glynn County Police Department and Abery's family attorney Benjamin Crump have not been returned.

Arbery was killed Feb. 23 after a pursuit by a white father and son who armed themselves and gave chase after seeing the 25-year-old black man running in their subdivision. More than two months passed before Gregory McMichael, 64, and Travis McMichael, 34, were jailed on charges of felony murder and aggravated assault.

RELATED: Breaking down the timeline of Ahmaud Arbery shooting on Feb. 23

A judge from outside the coastal Georgia community where Arbery was fatally shot has been appointed to preside over trial proceedings of the two men charged with Arbery's murder, including one defendant with close ties to law enforcement.

Court documents filed in Glynn County show that Superior Court Judge Timothy R. Walmsley was appointed to the case after all five judges in the legal circuit where Arbery was killed recused themselves. Walmsley is based in Savannah, about 70 miles (110 kilometers) north of where the slaying occurred just outside the port city of Brunswick.

Gregory McMichael, a retired investigator for the local district attorney, told police he thought Arbery was a burglar. He said Arbery attacked his son before he was shot.

Arbery's mother, Wanda Cooper-Jones, has said she believes her son was merely out jogging.

The delay in criminal charges and a cellphone video of the shooting leaked shortly before the May 7 arrests fueled national outrage over Arbery's death.

Last week, defense attorneys for the McMichaels cautioned against rushing to judgment. They said they soon plan to seek a preliminary hearing from a magistrate judge in Glynn County at which new details might be revealed. They also plan to ask that the McMichaels be released from jail on bond pending trial. That decision will now fall to Walmsley.

No court hearings had been scheduled as of Monday afternoon.

Gregory McMichael worked as an investigator for the local district attorney for more than two decades before he retired last year. Attorneys for Arbery's family and others have blamed the delay in arrests in part on the elder McMichael's ties to local law enforcement. The McMichaels weren't charged until after the Georgia Bureau of Investigation was brought into the case in early May.