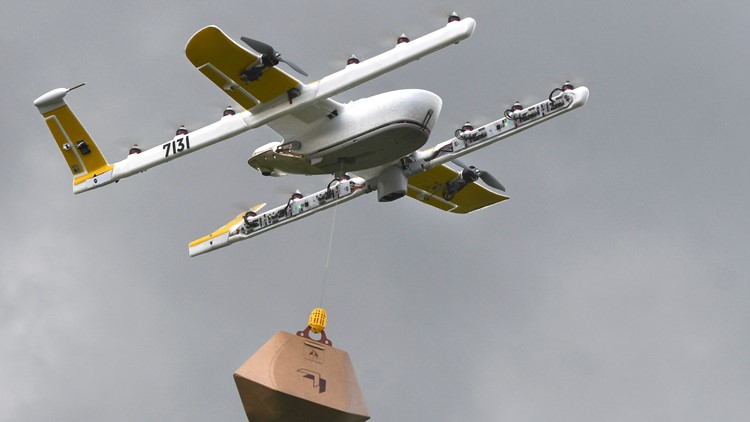 Photo by: AP
In this Tuesday, Aug, 7, 2018, photo a Wing Hummingbird drone carries a package of ice cream and popsicles as it leaves its launch site during a delivery flight demonstration in Blacksburg, Va. Wing, a subsidiary of Google's parent corporation Alphabet, hasn't been allowed to fly long distances, over people and beyond the pilot's line of sight. That changed when Virginia was selected as one of 10 areas to participate in an experimental program that would lower barriers on the technology. (Michael Shroyer via AP)

The Federal Aviation Administration has given the green light to a drone delivery company to start delivering packages.

Wing Aviation LLC is the first drone delivery company to be certified as an "air carrier" by the FAA. The company is owned by Alphabet Inc, and began as a Google X project.

The company announced their FAA approval in a blog post on Medium. The certification means that the company will now be able to deliver goods from local business directly to homes in the U.S.

"Goods like medicine or food can now be delivered faster by drone, giving families, shift workers, and other busy consumers more time to do the things that matter," the company said. "Air delivery also provides greater autonomy to those who need assistance with mobility. Also, our all-electric drones will reduce traffic on our roads and pollution and carbon emissions in our skies."

Wing said that more than 70,000 test flights and more than 3,000 deliveries were made before recieving FAA approval. The company submitted data to the FAA showing that a drone delivery was safer than making the same trip by car to buy an item.

Deliveries by Wing will begin in the Southwest Virginia area. The company has reached out to Blackburg and Christiansburg, VA to being demonstrations of the drone deliveries. A delivery trial is expected to launch later this year.