'Like the world was ending': Shopping plaza blast injures 21 in Florida

A worker at a deli across the street from the explosion said "I looked outside and it was almost like the world was ending." 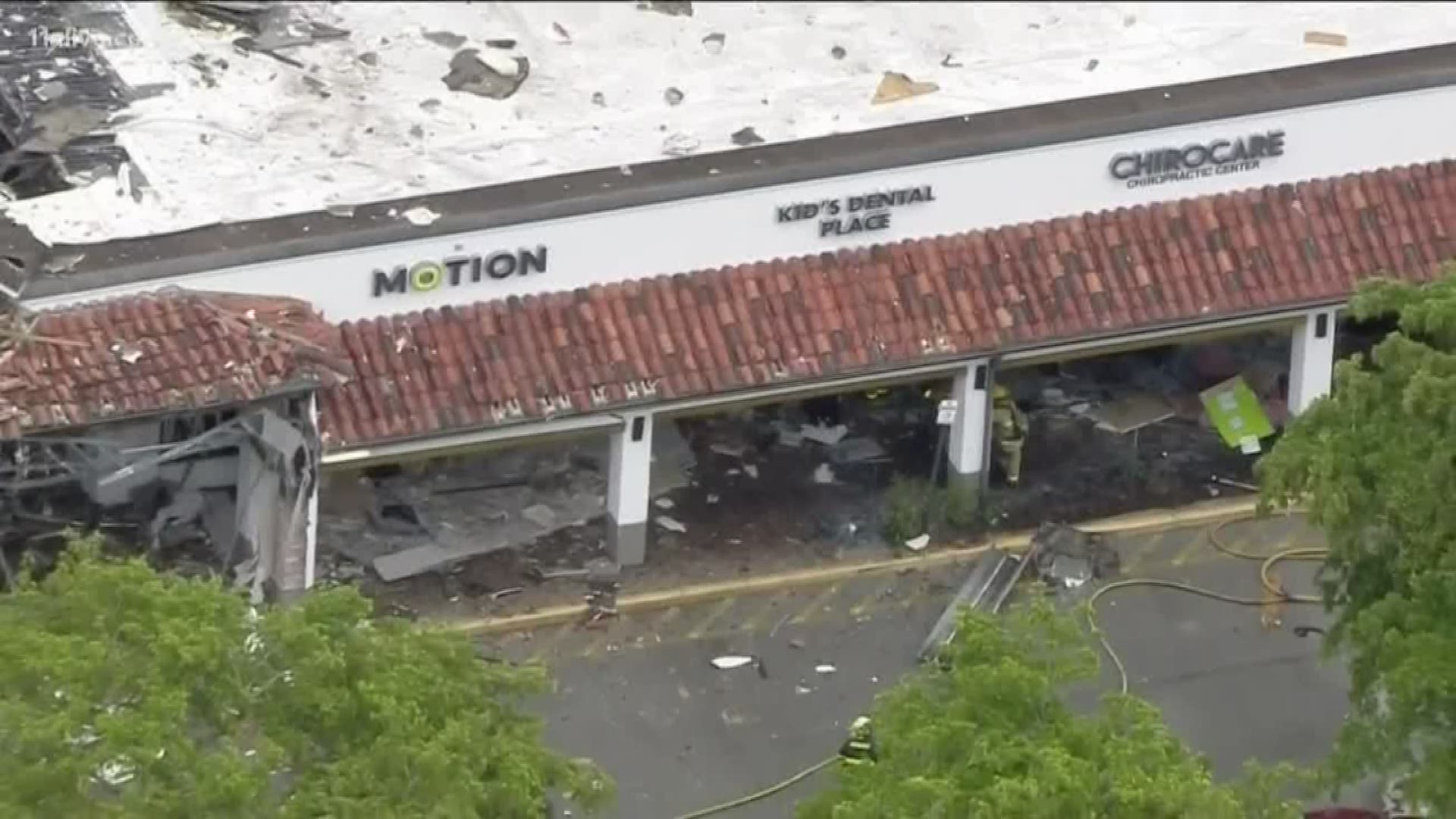 PLANTATION, Fla. — A vacant pizza restaurant exploded Saturday in a thundering roar at a South Florida shopping plaza, injuring more than 20 people as large chunks of concrete flew through the air.

The blast flung debris widely along a busy road in Plantation, west of Fort Lauderdale. The restaurant was destroyed, and nearby businesses and cars were damaged. Though firefighters found ruptured gas lines afterward, authorities said it was too early to determine a cause.

"We thought it was thunder at first, and then we felt the building shake and things started falling. I looked outside and it was almost like the world was ending," said Alex Carver, a worker at a deli across the street from the explosion. "It was nuts, man. It was crazy."

The explosion hurled large pieces of concrete up to 50 yards (45 meters) away and sent pieces of metal scattering as far as 100 yards (90 meters) across the street. Carver said two of his co-workers' cars were destroyed.

At least 21 people were injured though none of the injuries was life-threatening, Police Sgt. Jesica Ryan said.

The explosion demolished the building, leaving behind only part of its metal frame. The restaurant, called PizzaFire, had been out of business for several months. The blast also blew out the windows of a popular fitness club next door at the shopping plaza in Broward County.

Jesse Walaschek had just left the fitness club with his wife and three children, ages 4, 6 and 8. They were parked near the restaurant and had just driven about 50 yards (45 meters) away when they heard the blast.

"It was a massive explosion like I have never experienced," he said.

"Everything just stopped. You didn't see anybody. I just wanted to get these guys safe," he said, pointing to his children. "If this had happened a minute before when we were getting the kids in the car, it would have been really bad."

Dozens of firefighters responded and could be seen picking through the rubble with dogs sniffing through the debris to make sure people weren't trapped underneath. There were no known fatalities immediately after the explosion.

Credit: AP
A firefighter walks through the remains of a building after an explosion on Saturday, July 6, 2019, in Plantation, Fla. Several people were injured after a vacant pizza restaurant exploded in the South Florida shopping plaza Saturday, according to police. The restaurant was destroyed, and nearby businesses were damaged. (AP Photo/Brynn Anderson)

Fire department Battalion Chief Joel Gordon said there were ruptured gas lines when firefighters arrived, but he couldn't say for certain that it was a gas explosion.

"At this point, nobody was killed. Thank goodness for that. As bad as it is, it could have been a lot worse," Gordon said.

The explosion happened around 11:30 a.m. Gordon told reporters that crews found ruptured gas lines among the rubble when they arrived on scene but they can't confirm where the blast began.

He said the initial call was for an explosion at or near an LA Fitness location at the shopping plaza.

Photos and videos shared on social media showed heavy damage to an LA Fitness location, with windows blown out and debris scattered throughout the parking lot.

A worker at a restaurant about 150 yards away described it like something "out of a movie."

Aerial video from the scene showed heavy damage to nearby buildings and businesses.