Pig crossing: 250 escaped swine cause traffic headache for one town

Their owner faces more than $80,000 in fines for the pigs that have been spotted on and alongside the Vermont town road for weeks. 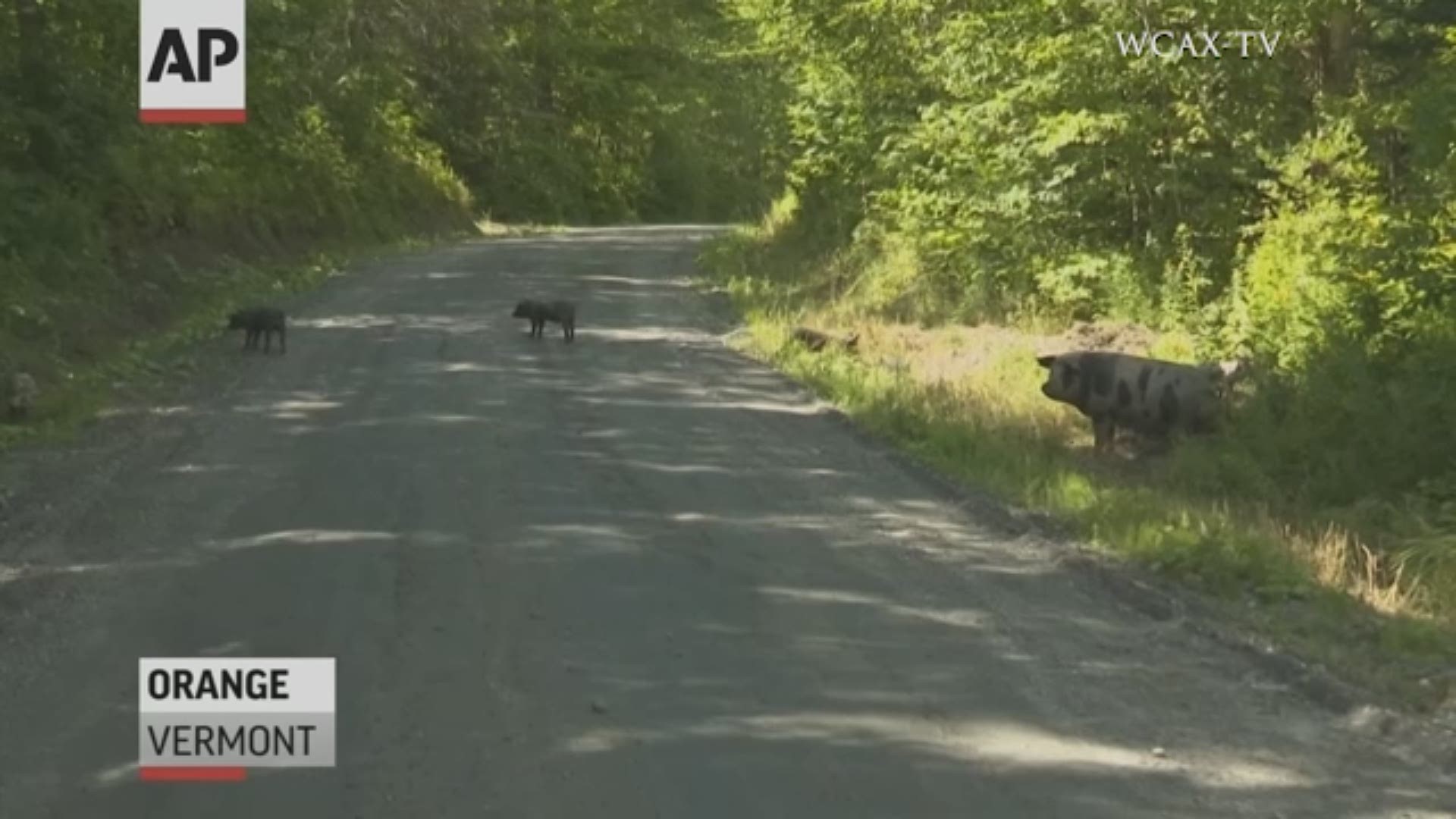 ORANGE, Vt. — About 250 pigs have been causing a ruckus in a Vermont town the past month after they escaped from their enclosure, but most of them had been returned as of Thursday thanks in part to a trail of hot dog buns and good ol' fashioned corralling.

Several farm workers and a couple of volunteers who heard about the loose pigs trudged up and down the dirt road hill Thursday trying to drive any pigs back into the Sugar Mountain Farm in Orange. They chased the animals into the brush, and ditches, working together to position themselves so that they could corral the large sows and boars, which frequently got away.

But farmer Walter Jeffries said most of his pigs have returned home.

RELATED: Adorable micro-chipped and leash-trained pig up for adoption

"The pigs have been allowed and remain to be allowed in the town right of way so cars are unable to pass, people can't walk on the road because the pigs chase them," said Town Clerk Angela Eastman on Thursday.

Jeffries faces tens of thousands of dollars in fines from the town for the pigs that have been spotted on and alongside the town road for weeks, creating a nuisance for drivers and pedestrians, according to the town.

Credit: AP
A pig that escaped from a Vermont farm walks along a road in Orange, Vt, on Thursday, Aug. 29, 2019. Farmer Walter Jeffries of Sugar Mountain Farm says most of the 250 pigs that escaped earlier this month are back and the fence, which he said was damaged by vandals, has been fixed. (AP Photo/Lisa Rathke)

Jeffries said he believes the fence enclosure was damaged by vandalism on the night of Aug. 11, allowing about 50 adult pigs and 200 piglets to escape. He thinks it was the work of a former employee and said he reported it to the police. The farm was also robbed recently of thousands of dollars in tools, he said.

Jeffries said his outdoor farm manager then got injured and wasn't able to repair the fencing.

"So we've been dealing with that ever since," he said Thursday, adding that about 99% of the pigs were back and the fence had been fixed.

Earlier in the day, Eastman said she spotted 16 pigs in the town right of way. A town official checks daily, counting and taking photos of the animals. The fine is based on the number of pigs in the right-of way. As of Thursday the town tallied $81,955, Eastman said.

"It is a public hazard," she said of the pigs.

The pigs also got loose last year, she said.

The Vermont Agency of Agriculture is working with the U.S. Department of Agriculture Wildlife Services to determine how much time is appropriate for the farmer to recover the animals before officials take any action, said agency spokesman Scott Waterman.

Agriculture Secretary Anson Tebbetts told NECN that his agency is concerned about public safety as well as creating a feral population of pigs, which can be destructive to property.

"We want to make sure travelers don't run into the animals — hurt the animals, or hurt themselves," he told NECN.