Players are still angry and emotional after the shooting of Jacob Blake, a Black man, by police in Kenosha, Wisconsin. 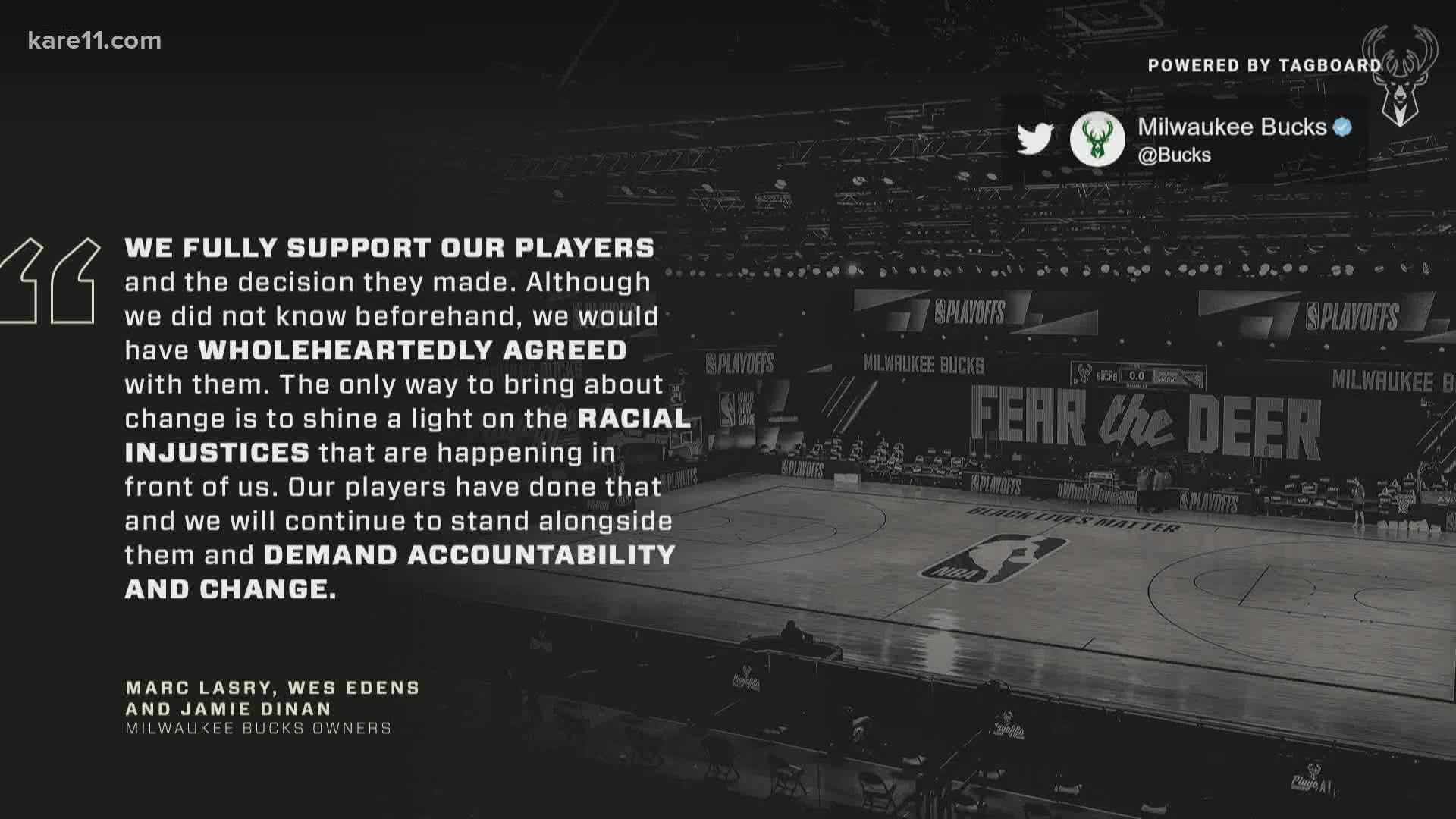 LAKE BUENA VISTA, Fla. — An unprecedented NBA walkout over racial injustice postponed a second day of the playoffs Thursday, although players pledged to finish the postseason even as they wrestled with their emotions about wanting to bring change in their communities.

For now, the basketball courts in the NBA's virus-free bubble at Disney World remained empty. And other athletes across the sports world also said they weren't ready to resume playing.

They are still angry and emotional after the shooting of Jacob Blake, a Black man, by police in Kenosha, Wisconsin. NBA players considered not playing again the rest of the postseason and going home to their communities, although they decided Thursday they wanted to continue, according to a person with knowledge of the details. The person spoke on condition of anonymity because no official announcement had been made.

“It’s obviously not easy, given everything that’s going on. But I think that if we can go out there and do our best and also have a list of things that we want to accomplish, everything gets completed.”

The NBA decided to postpone three more games Thursday to join the three that weren't played a day earlier.

NBA spokesman Mike Bass said the league hoped to resume Friday or Saturday. He added in as statement that a group of players at Disney would hold a video conference call later Thursday with representatives of the owners, including Michael Jordan, and National Basketball Players Association to discuss the next steps.

The tennis tours had already decided they would pause play Thursday at the Western & Southern Open in Flushing Meadows, New York; a number of NFL teams canceled practices; and pressure was being put on the NHL by members of the Hockey Diversity Alliance to postpone its two second-round playoff games.

A second night of WNBA games were also postponed and other teams and sports pondered whether they would play on.

“This is not a strike. This is not a boycott. This is a affirmatively day of reflection, a day of informed action and mobilization,” WNBA players’ union president Nneka Ogwumike said on ESPN.

The following was released by the WNBA: pic.twitter.com/1QFpQJxrYU

The Oakland Athletics decided not to play their game against the Texas Rangers. Three Major League Baseball games were postponed Wednesday, although others went on.

The sudden stoppages was reminiscent of March, when the NBA suspended its season after Utah center Rudy Gobert tested positive for the coronavirus. Other sports quickly followed until the worldwide sporting landscape had almost completely come to a halt.

NBA players agreed to resume their season in July at Disney, making clear they intended to chase social justice reform just as passionately as a championship. But the video of Blake's shooting on Sunday left them so disgusted and dispirited that they wondered whether they should continue playing.

The players voiced their frustrations in a meeting Wednesday night, then continued talks Thursday morning. As they prepared to do that, NBA referees led a march around campus to show their support in the fight against racism.

RELATED: After sports world shuts down for second time this year, what happens next?

Play had been set to resume at 4 p.m. with Game 6 of the Western Conference series between Utah and Denver. Boston and Toronto were also to begin their second-round series before the Clippers and Dallas met in the nightcap.

It was the Raptors and Celtics who had been most vocal about the idea of not playing, but the Milwaukee Bucks acted first when they opted to remain in their locker room instead of playing their Game 5 against Orlando on Wednesday. Kenosha is about 40 miles south of Milwaukee.

Before coming to Disney, many NBA players wrestled for weeks about whether it was even right to play, fearing that a return to games would take attention off the deaths of, among others, Breonna Taylor and George Floyd in recent months.

Credit: AP
An empty court and bench are shown before the start of a scheduled game between the Milwaukee Bucks and the Orlando Magic for Game 5 of an NBA basketball first-round playoff series, Wednesday, Aug. 26, 2020, in Lake Buena Vista, Fla. (Kevin C. Cox/Pool Photo via AP)

They ultimately decided that playing would give them the largest platform — while also providing a bigger target for critics.

The NBA's relationship with the White House eroded when Donald Trump was elected after President Barack Obama was close with some players and officials. Trump was critical of the league again Thursday.

“They’ve become like a political organization, and that’s not a good thing,” Trump told reporters, noting that the league’s ratings are down from previous seasons. “I don’t think that’s a good thing for sports or for the country.”

Earlier Thursday, Vice President Mike Pence’s chief of staff Marc Short said in a CNN interview that the NBA protests are “absurd and silly” when compared to their response to ongoing to human rights violations in China.