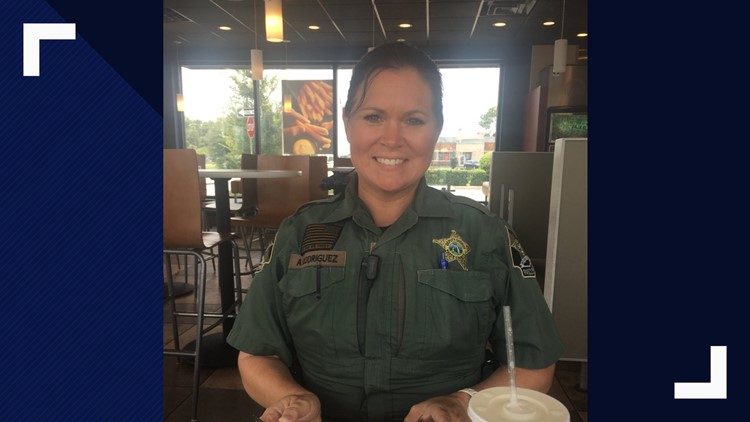 'She was a good deputy': Sheriff's office mourns the tragic passing of a deputy

Rodriguez had a husband and three children and has worked in the sheriff's office since January 2015, Nocco says.

Resources: Considering suicide or know someone who is? There is help

When she didn't arrive for work Sunday, her coworkers came to her apartment. They say they saw her foot and thought she was having a medical episode. When they went inside, they found she had already died by suicide.

“I promised her husband one thing - to tell everyone how special April was. That she was a good person with a great heart and loved her children very much," Nocco added. "The completion of suicide affects so many in our community."

Nocco discussed the agency's response to mental health and suicide, as well as officer wellness training, emotional survival and a PTSD app that is available for employees.

“Hopefully from the sadness of her death, someone will seek help," Nocco said. “It doesn’t matter where you are in life, if you need help, obtain it. There are people who want to help you.”

He added that it's not just a Pasco County Sheriff's Office issue -- but a national concern and issue for all deputies.

"She was a good deputy," Nocco reassured, adding her squad is "heartbroken."

Some deputies continue to feel guilty, wondering if they could have done something, Nocco explained. Chaplains and staff are on hand to help the sheriff's office staff during the difficult time.

Nocco said law enforcement officers are involved in traumatic situations and that they often see the worst in society at times.

"Rest in peace, April Rodriguez. There are few words that can express our feeling of loss. You are missed & will always be remembered," the sheriff's office added in a statement.

If you have suicidal thoughts, contact the Crisis Center of Tampa Bay at 211 or the National Suicide Prevention Lifeline at (800) 273-8255.

Related: Considering suicide or know someone who is? There is help