Many criticized Trump, saying his comment didn't directly condemn white supremacists. Others continue to show support for the president. 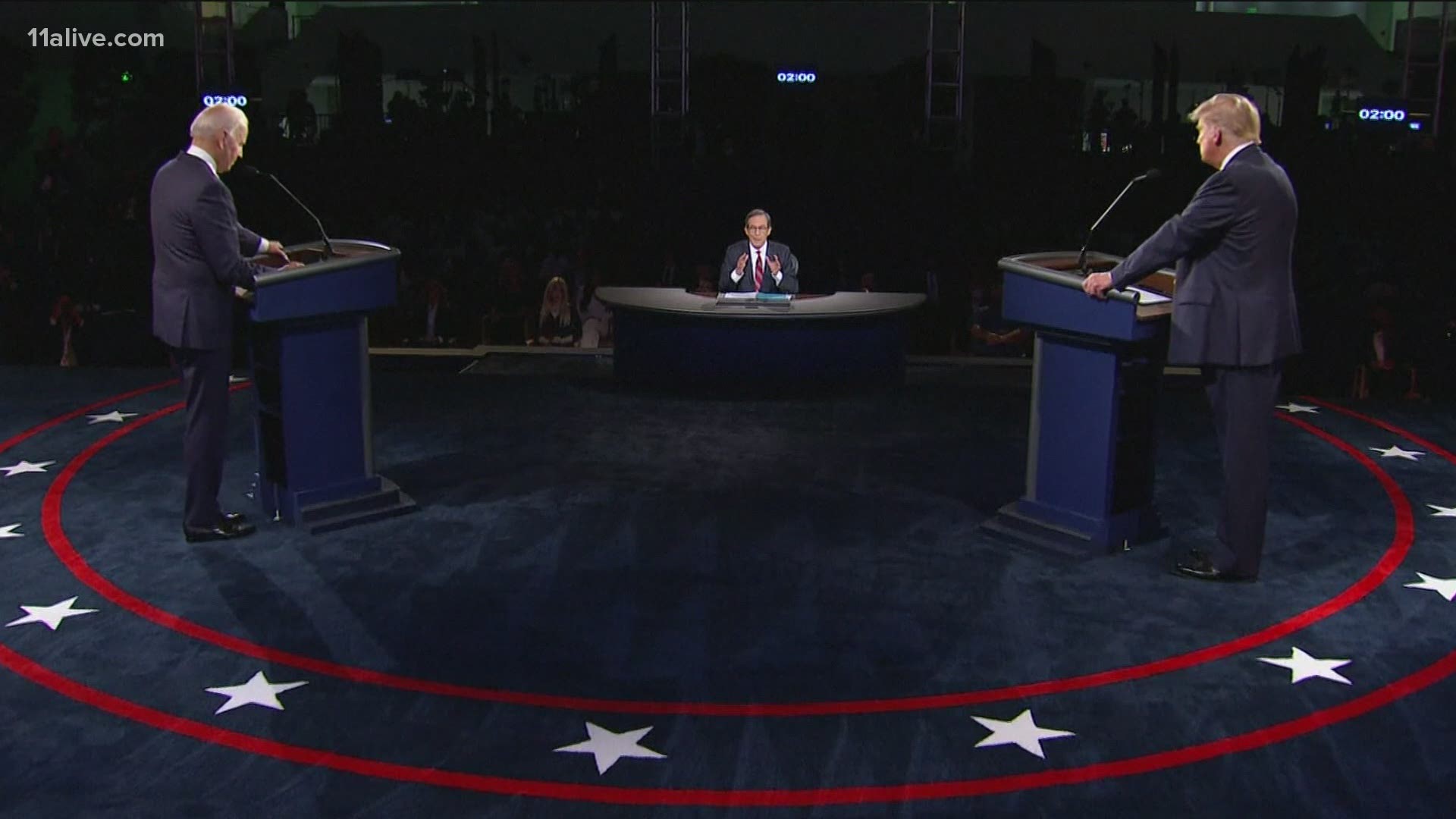 ATLANTA — Georgia leaders are speaking out following Tuesday night's presidential debate where the contentious topic of white supremacists and militia groups was put into the spotlight between President Donald Trump and Former Vice President Joe Biden.

The president was asked if he would be willing to condemn the groups and he responded saying he was "willing to do anything" because he wants to see peace.

But during the exchange with Biden and the moderator, Chris Wallace, Trump told the Proud Boys to "stand back and stand by". The Proud Boys is a far-right extremist group that has shown up at protests in the Pacific Northwest. The  group describes themselves as “western chauvinists,” and they have been known to incite street violence.

Many criticized Trump, saying his comment didn't directly condemn them. Others continue to show support for the president.

Here is what some prominent Georgia figures had to say about the exchange.

Republican Sen. David Perdue's camp: "Senator Perdue condemns racism, hate, and discrimination of any kind, and so does President Trump. The President has repeatedly denounced hate groups. In Atlanta last Friday, we heard President Trump designate the KKK and Antifa as terrorist organizations. He also called for lynching to be a federal hate crime. The media is pushing this false narrative while ignoring Joe Biden's refusal to condemn violent, far-left Antifa groups that have hijacked peaceful protests across our country to push their dangerous agenda."

Angela Stanton-King, Republican candidate for Georgia's 5th Congressional District: "The President has repeatedly condemned white supremacy, specifically saying in the wake of Charlottesville, 'Racism is evil and those who cause violence in its name are criminals and thugs, including the KKK, neo-Nazis, white supremacists, and other hate groups.' I believe the point the President was trying to make in the middle of a fiery debate is that all violence and hate should be condemned, including the leftist groups rioting in major cities across our country.

Personally I am excited about the Platinum Plan that President Trump presented last week here in Atlanta that speaks to his dedication to financially empowering the African American community. I look forward to continuing the work in assisting this administration in creating jobs and providing opportunities for new small business development in the fifth district of Georgia."

Andre Dickens, Atlanta City Coucilman: " Trump did not condemn the racists. He told the racists to standby"

Joe said plainly this is about equity and equality. Trump couldn’t disavow white supremacy. A vote for Trump means you agree with him and are a racist supporter. https://t.co/vA89Wd05Zm

Jon Ossoff, Democratic candidate for Senate: "Senator Perdue’s continued support for the President as Trump encourages the mobilization of white supremacist and extremist groups is downright shameful. The President’s conduct is deeply dangerous and a new low in modern American politics. October 12 is the first day of Early Voting, and I am calling on Georgians to vote in record numbers because we must reject the politics of hate and unite to defeat this virus.”

"Last night, President Trump once again failed to condemn the very real threat of violent white supremacy that has gripped our nation. As people of good conscience, we must unequivocally speak out against hatred, discrimination and bigotry in all its many forms and faces, and this is no exception. As the President stoked those same flames of hatred and division, Senator Kelly Loeffler poured more gasoline. There is no place for white supremacy in America. We all deserve better.”

RELATED: Here's how Georgians reacted before and during the debate