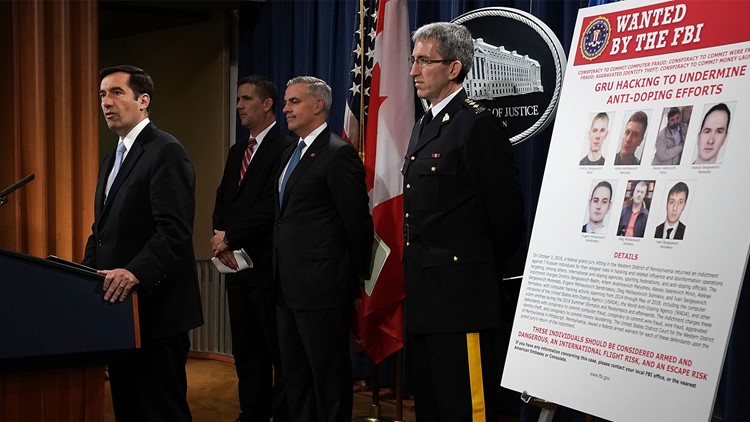 The hacking that began in December 2014 and continued until at least May 2018 intruded into computers and networks of U.S. and international citizens and corporations.
Author: Bart Jansen (USA TODAY)
Published: 9:37 AM EDT October 4, 2018
Updated: 12:55 PM EDT October 4, 2018

Seven Russian GRU intelligence officers were charged with hacking computers associated with 250 athletes and anti-doping sports organizations in the U.S. and around the world, Justice Department officials announced Thursday.

The criminal activity described in the 41-page indictment came in retaliation for people and organizations who revealed Russia’s doping program for its athletes — revelations that led to stripping dozens of Olympic medals from Russian athletes and banning that country's athletes from the 2016 Summer Olympics.

The hacking that began in December 2014 and continued until at least May 2018 intruded into computers and networks of U.S. citizens and corporations, and international corporations and their workers around the world, officials said.

“In other words, Russia cheated,” said Scott Brady, U.S. Attorney for western Pennsylvania. “They cheated, they got caught, they were banned from the Olympics, they were mad and they retaliated. In retaliating, they broke the law, so they are criminals.”

The conspiracy aimed to publicize stolen information as part of an influence and disinformation campaign designed to undermine and retaliate against the efforts of international anti-doping organizations and officials who had publicly exposed a Russian state-sponsored athlete doping program, officials said. Another goal was to damage the reputations of athletes around the world by falsely claiming that such athletes were using banned or performance-enhancing drugs, officials said.

“All of this was done to undermine those organizations’ efforts to ensure the integrity of the Olympic and other games," said John Demers, assistant attorney general for national security.

Other targets of the conspiracy included a chemical-weapons lab in The Hague and Westinghouse Electric Co., a nuclear-power company in Pennsylvania that provides nuclear fuel to Ukraine.

The charges were related to an intelligence operation against Russian agents in The Hague attempting to breach the cyber security of the Organization for the Prohibition of Chemical Weapons, which Dutch and United Kingdom officials announced Thursday. The prime ministers of the Netherlands and the United Kingdom issued a joint statement condemning Russia’s behavior.

The latest charges follow indictments earlier this year against 12 Russian GRU military intelligence officers and 13 Russian nationals and businesses. Those stemmed from special counsel Robert Mueller’s investigation of interference in the 2016 election. GRU is an acronym for the General Staff of the Armed Forces of the Russian Federation.

While the latest charges are not tied to Mueller’s investigation, some of the same GRU officers are charged, Demers said. Also participating in the investigation were the FBI’s cyber division and the Royal Canadian Mounted Police.

Besides the 250 individual athletes in 30 countries, targets included the U.S. Anti-Doping Agency headquartered in Colorado Springs, Colorado; the World Anti-Doping Agency in Montreal, Canada; the Canadian Centre for Ethics in Sports in Ottawa, Canada; the International Association of Athletes Federations in Monaco; and the Court of Arbitration for Sports in Lausanne, Switzerland.

The group known as Fancy Bears' Hack Team targeted athletes and anti-doping officials to reveal personal health information about them, according to Eric Welling, FBI's deputy assistant director for the cyber division. When the GRU officers couldn't hack computers remotely, they traveled to Switzerland, the Netherlands and Brazil to gain access to computers of traveling officials through hotel Wi-Fi systems, he said.

Travis Tygart, CEO of U.S. Anti-Doping Agency, said the charges provided a reassuring outcome for clean athletes everywhere, particularly the ones whose private information was revealed through the “despicable” hacking.

“These illegal and malicious acts were a desperate attempt to divert attention away from Russia’s state-sponsored doping program and were part of a broader scheme of corrupt and unethical behavior by the Russian government to manipulate international Olympic sport, of which the world now has the incontestable facts: a system that was abusing its own athletes with an institutionalized doping program has now been indicted for perpetrating cyber-attacks on innocent athletes from around the world while yet again trying to win by any means,” Tygart said in a statement.

“We are fighting back to protect U.S. citizens and organizations from criminal cyber attacks funded by the Russian government,” Brady said. “These seven defendants are charged with the pervasive campaign of hacking, stealing private and sensitive information and publicizing that information to retaliate against Russia’s detractors and sway public opinion in Russia’s favor."

Thursday’s charges followed the July indictment of 12 Russian military intelligence officers who were charged in a far-reaching hacking scheme that targeted the Democratic National Committee and Hillary Clinton’s 2016 presidential campaign.

The 11-count indictment alleged that Russians “engaged in a sustained effort” to penetrate Democratic Party repositories of information. The group also allegedly conspired to hack into computers of state election boards, secretaries of state and U.S. companies that supplied technology for elections.

But the indictments contained no allegations that the actions altered the vote count or changed the outcome of the election.

Because those Russian officials remain overseas, it is highly unlikely they will ever be prosecuted. But the U.S. action followed a practice of so-called “naming and shaming” foreign operations implicated in actions against this country.

The July charges followed a February case charging 13 Russian nationals and three businesses – including an internet firm tied to the Kremlin – with waging “information warfare against the United States.”