Voters head to polls in crucial midterm test for Trump

Republicans' across-the-board control of Congress is at stake in Tuesday's midterm election along with a majority of governorships and state-level positions. 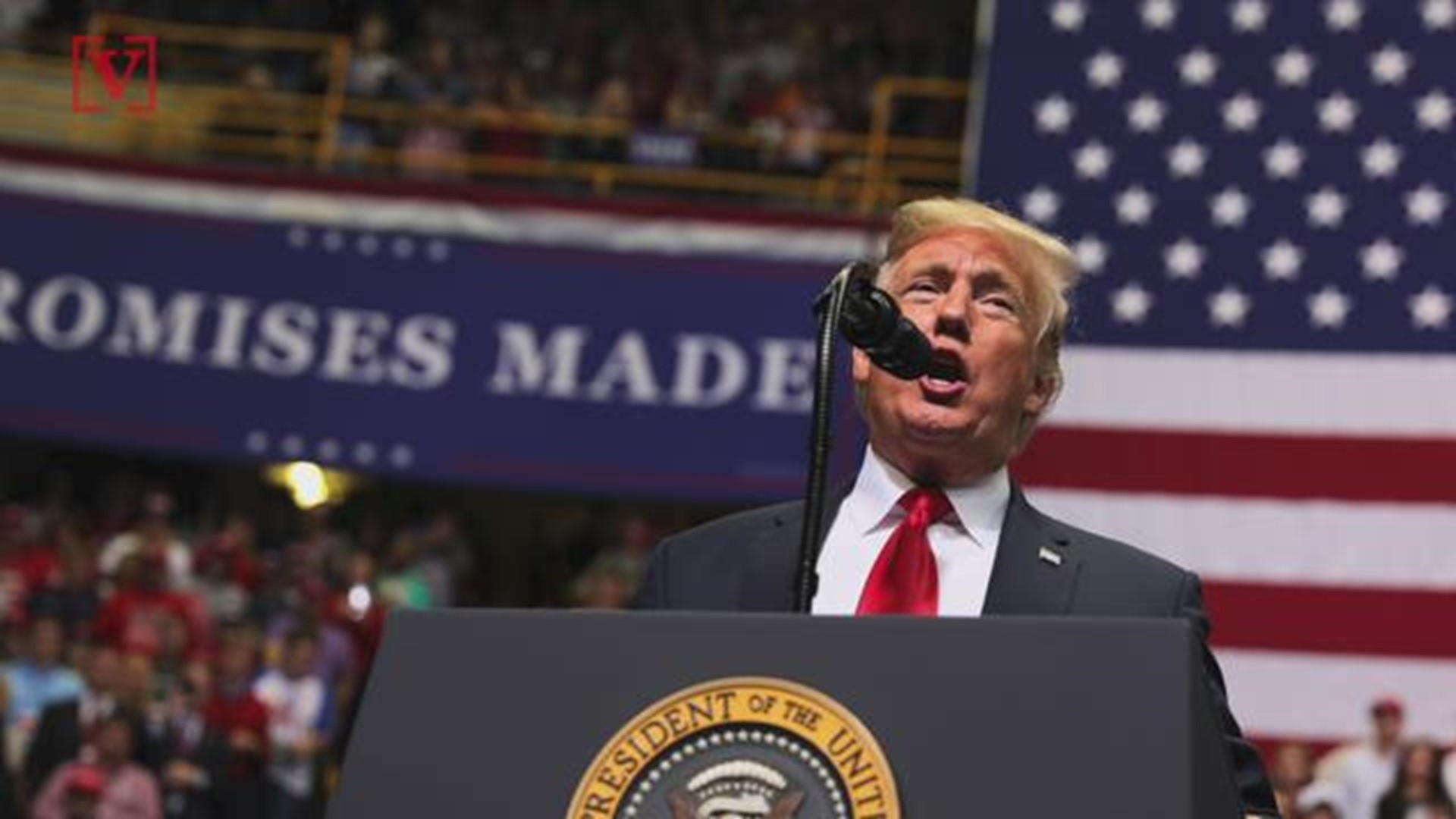 WASHINGTON — Tweetstorms and a trade war. Kanye in the Oval Office. Kavanaugh in the hearing room.

President Donald Trump's presidency has been a wild, turbulent, two-year ride. Now it's time for voters to weigh in how much they're enjoying it.

Republicans' across-the-board control of Congress is at stake in Tuesday's midterm election, along with command of governors' offices and statehouses around the country.

The president has barnstormed the nation this fall, holding multiple rallies a week, mindful that his future will be shaped by Election Day. "Even though I'm not on the ballot, in a certain way I am on the ballot," Trump said Monday.

A guide to what to watch as results come in Tuesday night. All times are EST.

Polls start closing at 6 p.m. in Kentucky. But things will really get rolling at 7 p.m., when polls close in Georgia, Indiana, Kentucky, South Carolina and Virginia. Another wave of numbers will begin coming in after 7:30 p.m. from North Carolina, Ohio and West Virginia. A big chunk of data will come after 8 p.m. and 9 p.m. when states such as Texas, New York, Michigan and Pennsylvania begin reporting. The 11 p.m. batch of states includes California, home to several competitive congressional races. Alaska, where polls close at 1 a.m. Wednesday, will end the night.

Much of America has already voted . Based on reports from 49 states, through Monday, at least 36.4 million people voted in the midterms before Election Day. And in a sign of the growing influence of early voting, 30 states reported exceeding their total number of mail and in-person votes cast ahead of the 2014 midterm elections.

A big question: Does it mean a higher turnout?

Turnout in midterm elections is typically near 40 percent, much lower than presidential elections, where turnout has hit around 60 percent in recent cycles. University of Florida professor Michael McDonald, who studies voting patterns, estimated recently that about 45 percent of eligible voters could cast ballots this year, a turnout level that hasn't been seen in nearly a half century.

Trump has struggled with college-educated women in the suburbs and Comstock's district could be among the first casualties as she faces Democrat Jennifer Wexton. Brat, meanwhile, won his seat by upsetting then-House Majority Leader Eric Cantor in the 2014 GOP primary. But this time he is facing a serious threat from Democrat Abigail Spanberger, a former CIA officer.

Another district to watch is in Kentucky — the Lexington-area battle pitting third-term Republican Rep. Andy Barr against Democrat Amy McGrath, a retired Marine fighter pilot. Trump won the 6th District by more than 15 percentage points in 2016. But McGrath has pushed Barr to the edge with the help of sharp campaign ads that went viral.

Republicans have had control of the House since the tea party helped sweep them into power in the 2010 midterms. Nearly a decade later, the GOP is trying to avoid a "blue wave" that returns Nancy Pelosi and House Democrats to the majority.

Control of the House is expected to be determined by a few dozen districts , many of them in the nation's suburbs. Democrats need a net increase of 23 seats to win back control — a number that many GOP officials concede is a very possible outcome.

The House races will offer clues to where Americans stand in 2018 on immigration, guns, health care, gender equality in the #MeToo era — and determine who they want representing them in Washington during the next two years of Trump's presidency.

Republicans hold a narrow Senate majority, 51-49, but have a huge advantage in these contests because the battle for control runs mostly through states that Trump won in 2016.

To put it simply: Democrats are on defense. Of the 35 Senate races, 10 involve Democratic incumbents seeking re-election in states won by Trump, often by large margins. Democrats' hopes of recapturing the Senate hinge on all their incumbents winning — a difficult task — and on flipping seats in Nevada, won by Hillary Clinton in 2016, and a few states that lean Republican, most notably Arizona, Tennessee and Texas.

Trump has coveted seats held by several red-state Democrats, including Joe Donnelly of Indiana, Joe Manchin of West Virginia, Claire McCaskill of Missouri, Jon Tester of Montana and Heidi Heitkamp of North Dakota. Strategists from both parties consider Heitkamp the most vulnerable Democrat but say the Senate makeup could be shaped by a number of narrowly contested races, including Arizona, Missouri, Indiana and Montana.

Another epic clash to watch: a race involving Texas Sen. Ted Cruz, Trump's one-time GOP presidential rival, against Democratic Rep. Beto O'Rourke, who hauled in a massive $70 million during the campaign. Cruz is still considered the favorite — Texas hasn't elected a Democrat to the Senate in 30 years.

But any viewer should keep a second screen handy to watch Trump's Twitter feed. The president is known for offering his first take on many key events on Twitter — and that could certainly happen as the election results come into fuller view.

YEAR OF THE WOMAN?

A record number of women are on the ballot — and could become the story of the 2018 election .

Two years after Clinton's defeat, more women than ever before won major party primaries for governor, the Senate and the House this year. The results could significantly increase the number of women in elected office.

Many Democratic women, including first-time candidates, have said Trump's election motivated to run for office. But the election is also following the emergence of the #MeToo movement, the massive women's march after Trump's inauguration and the pitched battle over the Supreme Court confirmation of Justice Brett Kavanaugh.

Women currently account for one-fifth of the 535 House members and senators. By next January, that number could change.

The night could witness a generational change in Congress and herald in a number of barrier-breaking officeholders.

The elections will mark the first nationwide voting since Russia targeted state election systems in the 2016 presidential race. Federal, state and local officials have sought to reassure the public that their voting systems are secure.

So far, there have been no signs that Russia or any other foreign actor has tried to launch cyberattacks against voting systems in any state, according to federal authorities.

Some states have already dealt with voting problems. Voters casting ballots early have encountered faulty machines in Texas and North Carolina, inaccurate mailers in Missouri and Montana, and voter registration problems in Tennessee and Georgia. In other states, including Kansas, Election Day polling places have been closed or consolidated.

Two Republican members of Congress are trying to win another term while facing separate federal charges.

Rep. Duncan Hunter, R-Calif., and his wife are accused of misspending more than $250,000 in campaign funds on everything from tequila shots to airfare for a family pet. Prosecutors say the couple tried to conceal the illegal spending as donations to charities, including groups for wounded veterans. Hunter faces Democrat Ammar Campa-Najjar in a GOP-friendly district in the San Diego area.

Rep. Chris Collins, R-N.Y., is accused of illegally leaking confidential information about a biopharmaceutical company to his son and the father of his son's fiancée that allowed them to avoid hundreds of thousands of dollars in stock losses.

Collins' most serious charge carries a potential prison term of up to 20 years. If Collins wins in the western New York district and is later convicted and forced to resign, a special election would be held.

Texas Attorney General Ken Paxton is still under indictment — he pleaded not guilty to two felony counts of securities fraud. But the Republican is favored to win a second term, helped by a positive assessment from Trump, who singled him out at a recent rally in Houston as doing a "great job."