Kelly Mulvaney has cleaned almost 600 gravestones since this summer and hopes to have at least all the military ones done by Memorial Day. 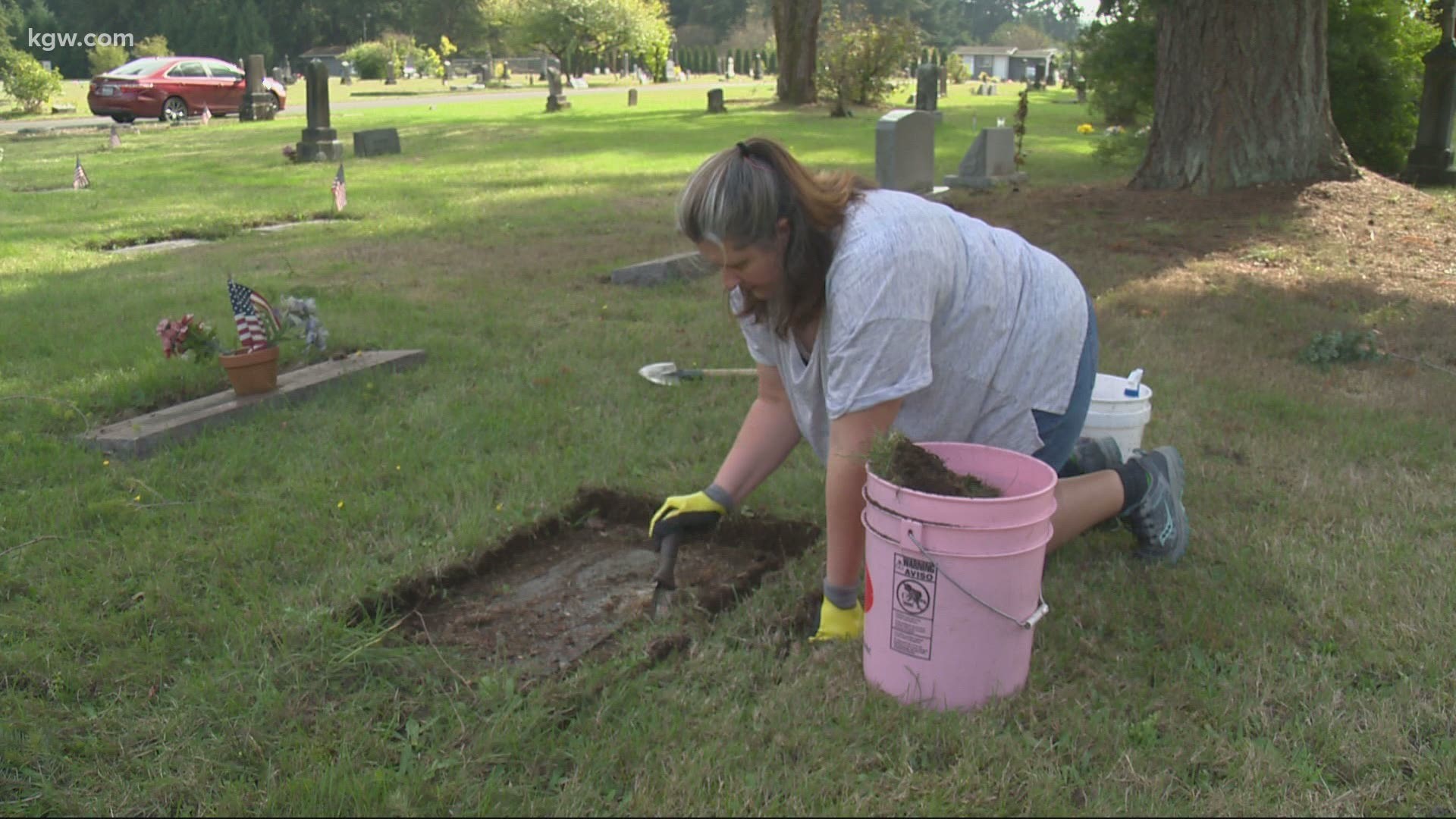 GRAND MOUND, Wash — Tucked away in Thurston County sits a small cemetery. The Grand Mound Cemetery is the final resting place for family, friends and heroes that have served our country.

It's also where an angel works.

Kelly Mulvaney opens the back of her Toyota Camry parked along the drive inside the cemetery and pulls out two buckets, some gloves and a shovel. On this day, she has a spot picked out, a gravesite level with the ground and covered in pine needles and grass.

The years of neglect can be seen in the grass that's crept up over the edges of not only this headstone, but almost every other headstone at the Grand Mound Cemetery.

Mulvaney picks up an edging shovel and gets to work. Stepping down carefully on the shovel around the edges of the marker, she reveals the hidden few inches surrounding the border that was once there so many years ago.

"This guy's name is Evan David James," Mulvaney said as she begins to brush off the dirt. "He was a corporal in the U.S. Marine Corps in Vietnam."

One by one, Kelly Mulvaney has been cleaning the grave stones at Grand Mound Cemetery just south of Olympia. So far she's edged, cleaned and made nearly 600 gravesites look new again.

This is one of the almost 600 headstones at Grand Mound Cemetery that Mulvaney has cleaned, edged and made look almost new again.

Back when the pandemic first started, she said there wasn't much for kids to do cooped up inside. So, she brought her granddaughter to the cemetery to walk the paths. Then on Memorial Day, she and her granddaughter were walking the property looking at all the flags when she noticed a common sight.

"I saw all the military headstones covered in mold and moss and mildew and I'm like those aren't supposed to look like that," Mulvaney said.

What makes Mulvaney's selfless acts that much more amazing, her family isn't buried here, but in Yakima.

"I'm not able to care for their gravesites, so this is kind of my way of being able to help other people in the same situation," Mulvaney said scrubbing away.

Crystal Hitchcock's mom, Vickie McKinney, is buried on the west end of the cemetery. She died Nov. 19, 1989, after the car she was in was hit head-on by a semi-truck that swerved into her lane to avoid stopped traffic. Crystal was only 8 years old.

"I actually have no memories of her," Hitchcock said. "A lot of people tell me that I look just like her."

Other family members say McKinney was outgoing, active and was a very loving mother devoted to her husband and kids.

"I am now older than my mom was," Hitchcock said. "I hit that mark last October."

She said she visits her mom's grave a few times a year, often bringing her own two daughters with her.

"My girls won't ever know her, so that part is really, really difficult. They don't get what I had when I was growing up with my grandmother. That's the hard part for me, knowing they won't get the experiences that I had," Hitchcock said.

The headstones are a reminder of how life can change in an instant and they're being cleaned by an angel.

"The people aren't forgotten, but sometimes the headstones get old and covered with dirt and people can't get here," Mulvaney said.

Mulvaney is washing away the years of wear and tear, leaving it beautiful for the future.

"It's incredible the work that she does," Hitchcock said. "I can't believe that somebody would be kind enough to do that and take so much time out of their day and their week and year and do that for somebody else that they don't even know."

Mulvaney hopes to have all of the military headstones done by next Memorial Day. You can follow her progress here on her Facebook page.