Coast Guard veteran Bob Turnbull hadn't cut his hair since 2016, when a hunting accident cost him his leg. 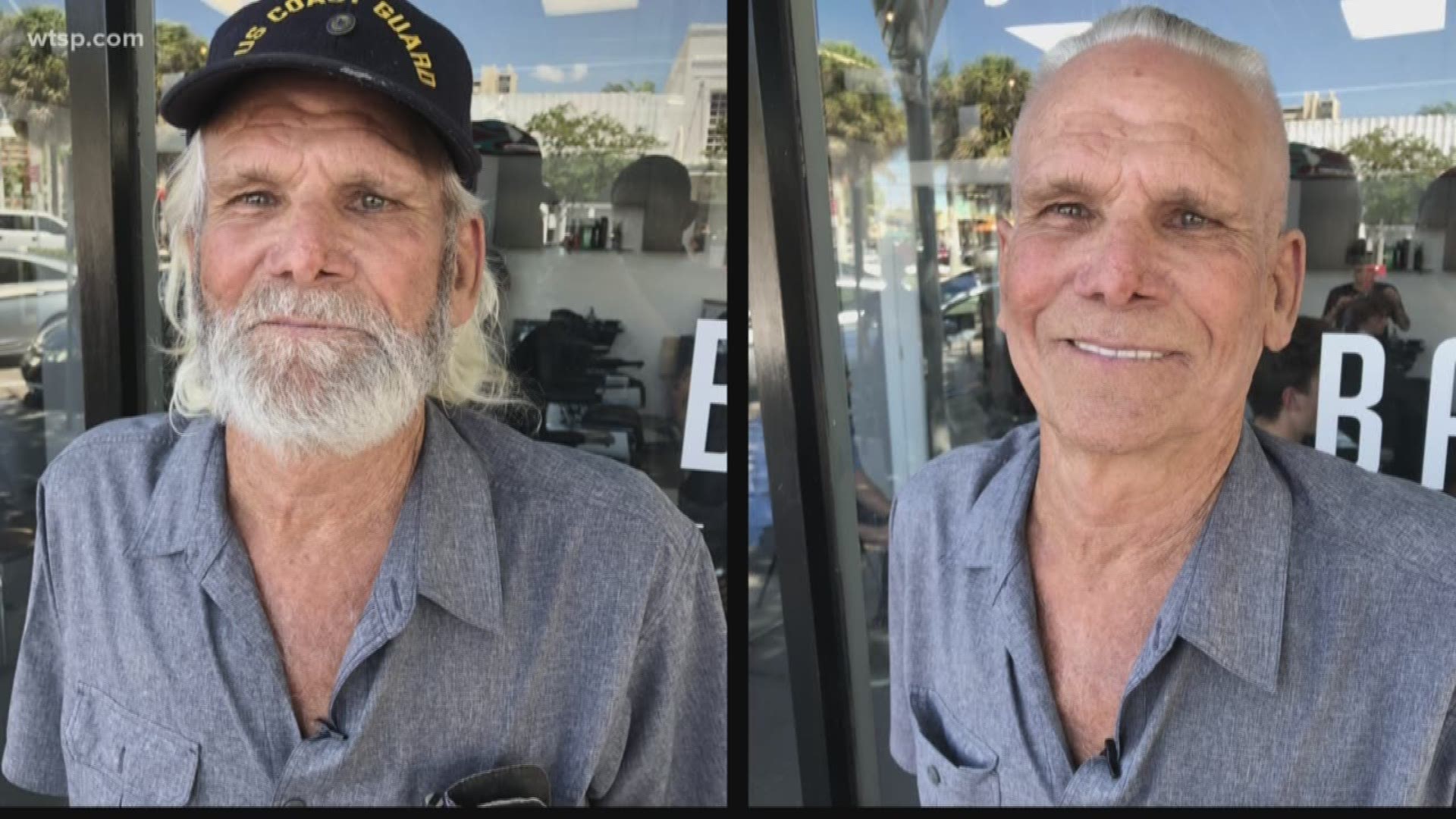 ST. PETERSBURG, Fla. — Barbers are used to seeing clients with wild heads of hair, but the owner of St. Petersburg’s Billy’s Corner Barbershop called Thursday’s trim a first for him.

“We’re happy to be a part of it,” said Billy Hume. “We’ve been talking about it all week.”

Bob Turnbull had never stepped foot in Billy’s Corner Barbershop before Tuesday. He wanted to meet the people who he’d visit later in the week for his first haircut in 2 1/2 years.

The ride over to the barber only took 15 minutes from his doctor’s office. Bob stopped in to say hello and give his prosthetists one last chance to see his flowing white locks, which easily dipped past his broad shoulders.

Bob has been a patient of St. Pete Limb & Brace for almost a year. He moved to Florida around then to be closer to family after his accident. In November 2016, while deer hunting alone in the snowy New Hampshire mountains, he fell onto an ice patch. The impact shattered both of his artificial knees.

It took him two days to crawl out of the forest. It took another 28 hours to drive home where surgeons tried to save his legs.

“It’s been a long journey,” he said during the car ride to Billy’s.

An infection in his right knee forced Bob into an immobilizer for nine months. Antibiotics caused his kidneys to shut down. Dialysis followed. After getting his kidney function back under control doctors reassessed the situation with Bob’s leg but found it would no longer straighten.

The leg didn’t heal and led to what most would consider a difficult decision. Keep his right leg as is and never walk again; cut it, pin it, and fuse it and never bend it again; or amputate above the knee and get a prosthetic.

“I said the first two are not an option,” he said.

Setting a goal is an important step for anyone who needs to relearn how to walk. Bob, who served in the Coast Guard in the North Sea from 1962 to 1969, had always had a tight, cropped haircut. He vowed not to cut his hair again until he could walk into a barber without pain and without assistance.

“I disliked it so much that’s what kept me going with my therapy.”

Thursday was the payoff. The ride to Billy’s was filled with anticipation.

“I can’t put my shoulders back to put it in a rubber band,” said Bob, who also hadn’t shaved since his 2016 accident. “It’s a good day for everybody.

Credit: 10News Staff
Billy Hume, left, said Bob Turnbull's first haircut in 2 1/2 years was on the house. Bob's wife Cathy was there too.

One of his prosthetists, Gina Vittetoe, helped find the proper barbershop for Bob’s big day. She specifically picked Billy’s because it checked off one of Bob’s haircut requirements: a barber licensed to give a straight-edge shave.

Omar greeted Bob as he entered the shop with nary a limp. There was confidence in his stride as he made his way to the black leather chair. Bob removed his tattered Coast Guard hat and let his long hair dangle down as Omar slipped a cape over his shoulders.

It was finally time.

“I look like the north end of a southbound mule,” he joked.

What took over two years to grow required less than an hour to remove. Clumps of white hair fell to the floor with each snip of the scissors. Bob and Omar joked a bit about how young the veteran looked now that a few inches of hair was gone.

Bob’s wife of 52 years, Cathy, watched with their son, George, from the waiting area. She smiled at the sight of her husband’s transformation back to the look she loved and remembered.

“I don’t know who that is sitting in there,” she said with a youthful grin. “It’s very exciting. I’m a little apprehensive because for two years now I’ve gotten used to the long hair, but I don’t care for it.”

The straight-razor shave wrapped up the afternoon. Bob grunted happily at the application of a steamed towel.

Billy, a Boston transplant, watched from the corner with satisfaction on his face.

“When I got the full story this morning, I was inspired,” he said. “He’s looking fantastic.”

Billy told Bob his haircuts were free for life as long as he owned the shop. The gesture was appreciated but barely accepted. Bob tipped Omar extra to make up for Billy’s generosity.

Friends and family embraced Bob as he walked out into the entryway as fresh-faced man. His clean-shaven face was a stark contrast to the wispy white curls he entered with. There was even a faint tan line where his beard used to be.

“This is very meaningful to him,” said Cathy. “It’s symbolic.”

A few photos later and cheerful goodbyes and Bob was out the door. The tapered haircut looked presentable and comfortable. He walked with pride past the barber pole towards his truck.

“I’m going to shave tomorrow just because I can!” he said as he pulled away from the barbershop that had provided him with a benchmark memory. His black cane sat unneeded next to him in the front seat.