Mom, daughter fight for new life after domestic violence took them near death

This 11-year-old and her mom have both faced death. They have both battled back to do what many said they could never do. 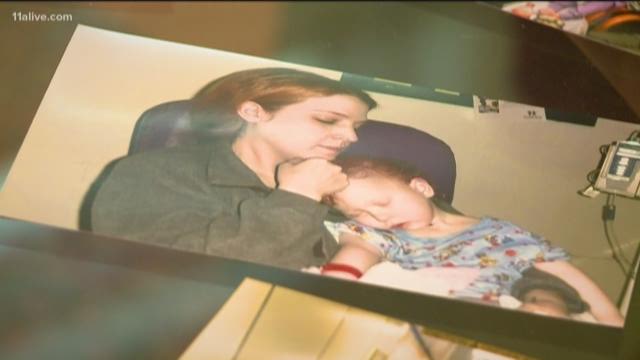 Faith and her mom, Victoria Cuore hold hands tightly as they walk into the place where Faith has practically grown up: the doctor’s office.

You will never hear them complain about it. They always appreciate where they are in life because they never forget where they’ve been.

Victoria said, “The connection we have is amazing.” It has been built one unimaginable challenge at a time. “We’ve had almost 70 surgeries between us,” Victoria said.

Theirs is a connection of two survivors.

She wasn't expected to see her 2nd birthday, but look at her now

Sean Wyatt's chance to shine in the spotlight

This 11-year-old and her mom have both faced death. They have both battled back to do what many said they could never do.

Faith is dressed in purple. It is her favorite color. She confidently walks in the exam room. Dr. John Riski smiles to greet her. “It’s great to see you, Faith.” He is the Craniofacial Clinical Director for Children’s Healthcare of Atlanta.

“Give me some knuckles and have a seat in the talking chair.” He directs.

He asks Faith, “What is the favorite thing you did all summer?” He asks. “Being with my mom.” She answers.
Their fight together has bonded them deeply. It is a fight that began before Faith was born.

“I am a survivor of domestic violence.” Victoria said. “I got married and became pregnant and once I became pregnant I ended up at the hands of an abuser.” She tears up as she remembers. “I would go unconscious and I would feel this little kicking ‘I’m here too,’ don’t give up.”

She said, “A alcoholic psychopath took me and my unborn daughter to death’s door.”

Unrecognizable in the emergency room, Victoria went into early labor. “We coded and my baby was life flighted to Children’s hospital.”

In that moment Victoria made a promise to her daughter. “I promised her I’d never let him do to her what he did to me.”

From that day on, it would be just the two of them. Together, they were in for the fight of their lives.

“They told me in the hospital that she wasn’t going to survive, they told me she wouldn’t talk or eat.” Victoria said.

Victoria Cuore was determined to prove the doctors wrong.

Faith was born with a non-functioning, almost non-existent tongue. That is why doctors said it would be impossible for her to talk.

“Lemon lazy lollipop.” Faith chimes in. Dr. Riski said, “The compensation she is making for the tongue really amazes me.”

Victoria quit her corporate job to be Faith’s nurse, teacher, therapist and speech coach. Faith has always needed round the clock care. They refused to accept “no” about anything. It worked. In the speech lab, Dr. Riski has yet to find any word that stumps Faith.

The beautiful girl with the fire red hair is determined and funny. She has a pure and loving heart. She is an old soul who understand that her mom’s survival led to hers.

Faith said, “She is the strongest woman in the world.” She adds, “She is stronger than a mountain.”

They point to each other for strength and inspiration. Victoria said, “To me, my daughter defines bravery.” Faith smiles at her mom. “She made me brave.” “My mom made me, me.”

Victoria wipes a happy tear from her cheek.

“I believe in her and she believes in me and that is why I love her.” Faith said. It is why they know wherever they go next, as long as they are together, everything is going to be ok.

Victoria Cuore is sharing her story publicly for the first time because feels strongly about empowering other survivors of domestic violence. She has written a memoir, “Who Kicked First.”