Parents of kids with Down syndrome band together with tattoo

Local parents are coming together to get a special tattoo honor their children with Down syndrome. 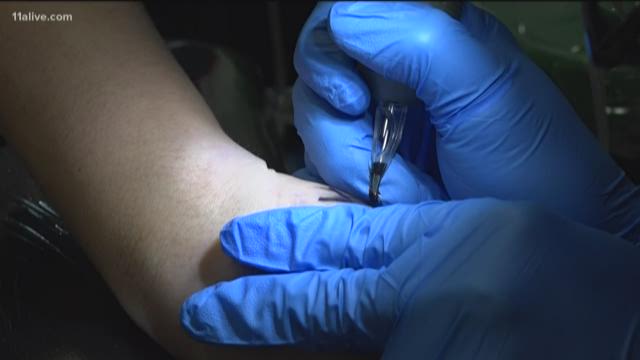 ATLANTA - A group of metro Atlanta moms and dads are coming together to recognize their unique bond as parents of kids with Down syndrome.

“Most of us had never dreamed we would be getting a tattoo but it just seemed right,” Jennifer Sheran, mom to 7-year-old Joey, said. “We all huddled and cheered each other on. Many of us had never met before that night but share this forever bond.”

Parents of kids with Down syndrome band together with unity tattoo

The tattoo, meant to show unity and honor their kids, is an idea that has spread across the country and through social media.

Sheran explained the three points of the arrow represents the three copies of the 21st chromosome shown in Down syndrome.

“Like an arrow, we are often stretched before we soar,” she told 11Alive.

On Friday, the Down Syndrome Association of Atlanta and GiGi’s Playhouse hosted an additional 80 parents for a tattoo party.

“Both DSAA and GiGi’s have been so amazing for our family. It is through DSAA that I met my people - other parents on this journey,” Sheran said.

“Onward. Upward. Change. Unite. Courage. Strength. • • • Three arrows to symbolize the the triplication of the 21st chromosome in Down syndrome and the thought that you have to be stretched to move forward. The arrows pointing outward from the body, to represent always moving onward and upward in our life.” #TheLuckyFewTattoo #DownSyndrome #t21