But the poll shows 39% are still undecided. 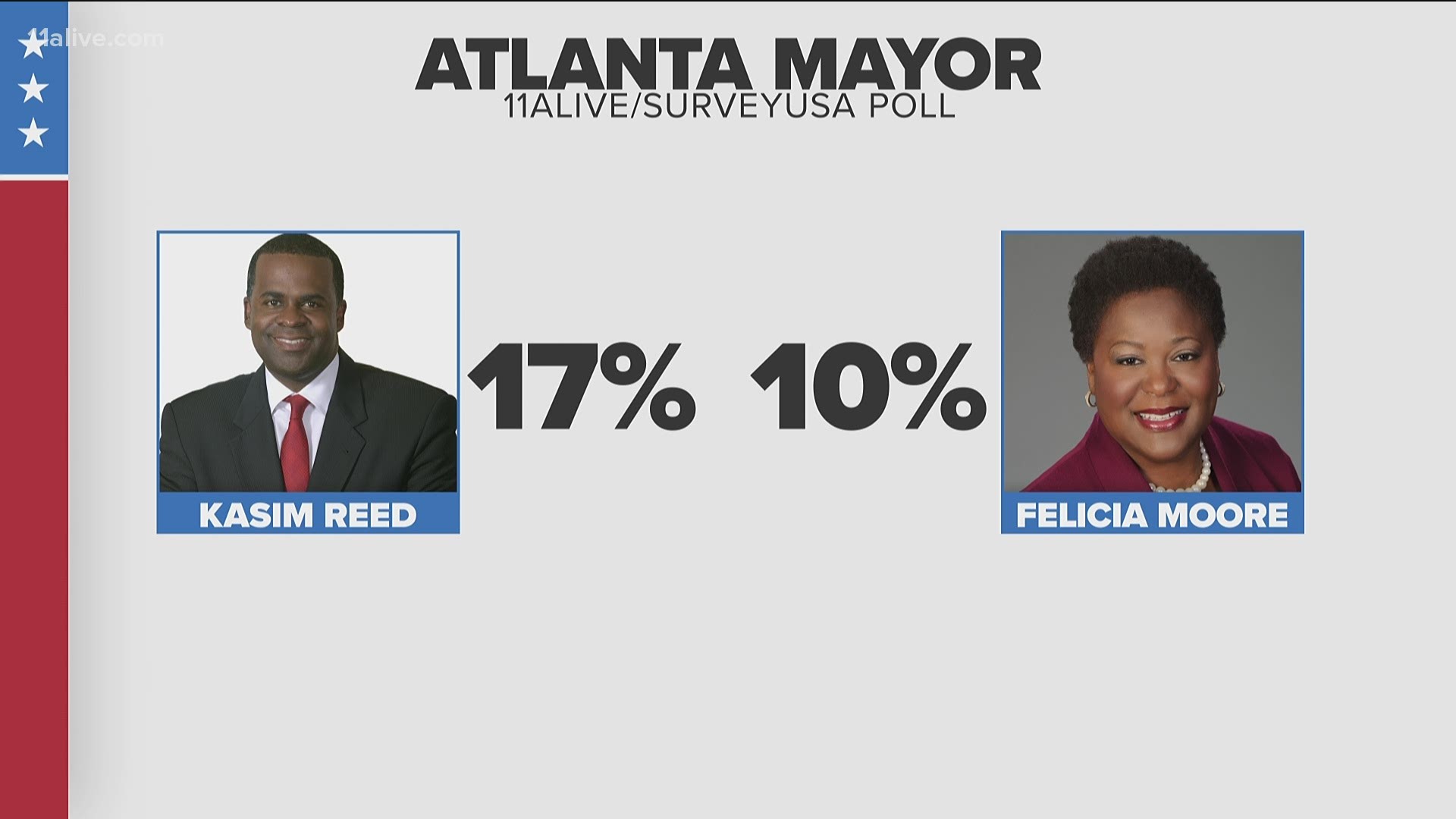 ATLANTA — An exclusive 11Alive News poll of voters in Atlanta shows former mayor Kasim Reed leading the field of candidates for mayor. It also shows a large plurality of voters still haven’t decided who they would choose for the next mayor of Atlanta.

The SurveyUSA poll conducted of 516 likely voters indicates the former two-term mayor would face a runoff with city council president Felicia Moore. Reed is the choice of 17% of voters polled, Moore at 10%. If no candidate wins more than 50% of the November election votes, a runoff would take place in December.

The poll has a credibility interval of plus/minus 5.7 percentage points.  Here’s how the candidates tallied:

Kasim Reed easily won re-election in 2013 and boasted in 2017 that he could easily win again if a term-limits law hadn’t prevented him from seeking a third consecutive term. That law does not prevent him from succeeding Mayor Keisha Lance Bottoms, who announced in May she would not seek a second term as mayor.

Moore told 11Alive News the poll doesn't make the mayor's race a two-person race. "We’re not discounting anybody. It’s early. It’s only a snapshot in time. As we progress over the next four months, our message is 'join our team because we want to make city hall better,'" Moore said.

Reed said the poll doesn't indicate that he's the frontrunner.  "I think this is going to be a race between myself and the council president. And I’m comfortable with that. I don’t feel like a frontrunner. I don’t think that way," Reed said in an interview Tuesday.

Reed, Moore and other candidates for mayor have presented programs that they say will attack rising rates of certain violent crimes in Atlanta, including murder and aggravated assault. 77% of voters polled said the crime issue will be a “major factor” in their votes for mayor.

During Reed’s second term, the US Justice Department began a corruption investigation that resulted in indictments and guilty pleas from some of Reed’s top aides.

Reed has not been accused of any crime and has said he was unaware of any illegal activity in his administration.

SurveyUSA asked voters if “a candidate being under investigation for alleged campaign finance violations (would) be a major factor” in their votes. 64% answered that such an investigation would be a major factor.  Recently, the Atlanta Journal-Constitution reported that federal investigators are probing Reed’s campaign spending from his 2013 re-election.

City councilman Antonio Brown, another candidate for mayor, is currently under indictment in a federal fraud case. Brown denies committing any crime.