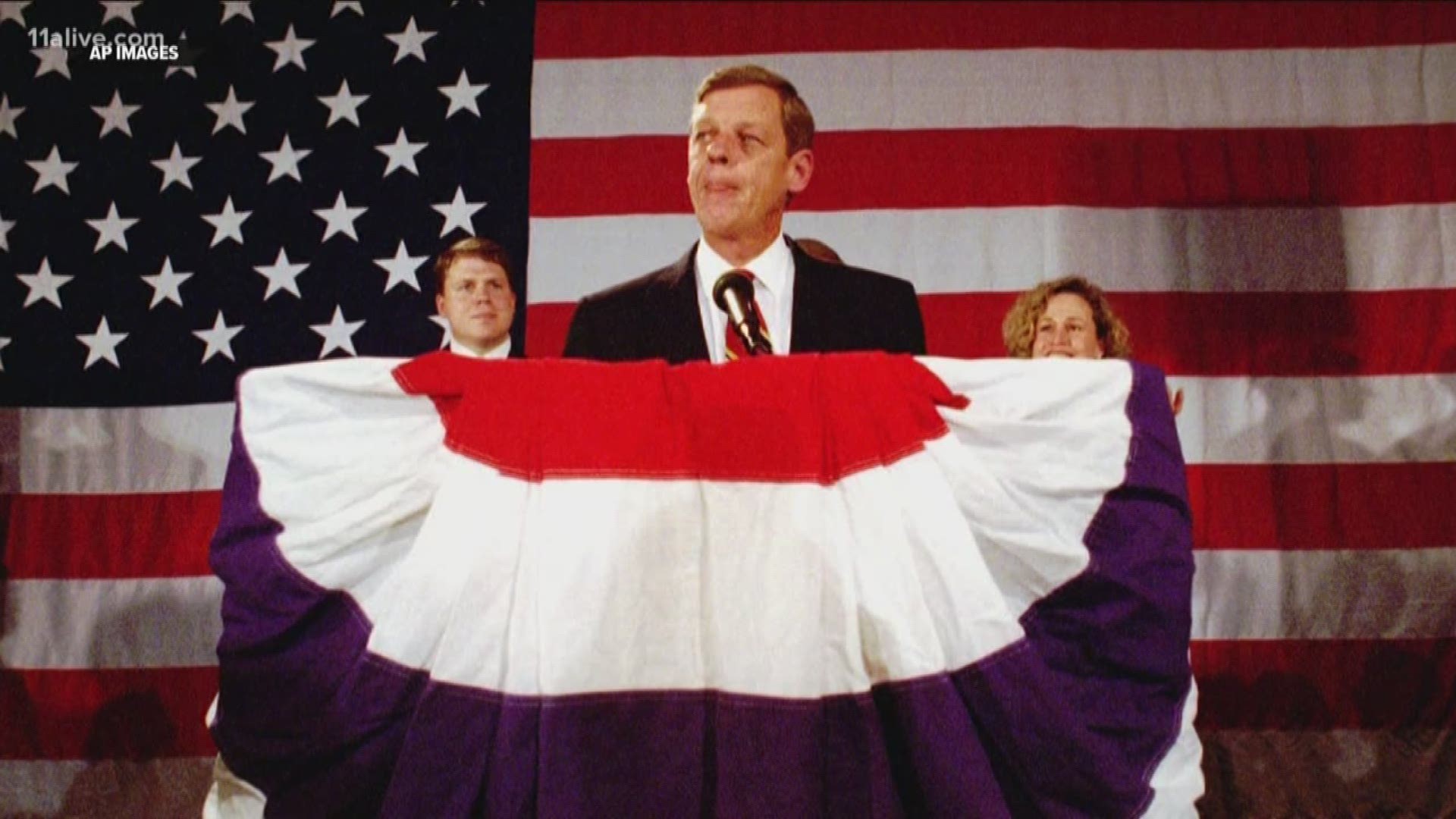 After the news spread that U.S. Sen. Johnny Isaskson would be resigning at the end of the year due to health reasons, political leaders responded.

“No one embodies the heart and soul of Georgia more than Johnny Isakson," said Governor Kemp. "Our state and country have been immeasurably blessed by his leadership in the Georgia General Assembly, U.S. House, and U.S. Senate. Senator Isakson’s list of accomplishments on behalf of the state that he loves is long and revered, but what Georgia should be most thankful for is the high standard that Johnny held as a true gentleman, a fighter for his constituents, a trusted advocate for our nation’s veterans, and one of the greatest statesmen to ever answer the call of service to our country. Marty and I are forever grateful for the friendship that Johnny and Dianne have shown us over the years and wish them the very best in the years to come. I will appoint Senator Isakson’s replacement at the appropriate time.”

"Senator Isakson is a lifelong family friend, and we are deeply grateful for his dedicated service to our state and nation, including alongside my father in the Georgia General Assembly," said First Lady Marty Kemp. "Georgia is incredibly blessed to have had Johnny on our side for all these years. Our family is praying for Johnny and Dianne as they embark on this new journey."

“The loss of Johnny Isakson from public life will leave a void in Georgia which is beyond comprehension. While I respect his reasons, I feel a tremendous sense of personal sadness – Johnny is a mentor, role model and friend. Over a distinguished career in the Georgia House, Georgia State Senate, State Board of Education, U.S. House and U.S. Senate, Johnny Isakson demonstrated that civility and reasonableness are virtues that will never go out of style. My family and I will continue to pray for Johnny, Dianne and the Isakson family.”

Stacey Abrams, while saying she would not run for his seat, wished him well.

“Our thoughts are with Senator Isakson and his family."

“Over the course of his career, Senator Isakson consistently put Georgians first and embodied what it means to be a workhorse and not a show horse in Washington. He built the Republican Party of Georgia from the ground up, and I am so thankful for his conservative leadership. His commitment to our Georgia values is something every elected official in our state should seek to emulate. Brooke and I wish him and his family all the best in the coming years.”

“Senator Isakson’s presence and unique ability to build consensus around solutions to the problems Americans face will be sorely missed in the Senate. He is certainly one of Georgia’s giants. I am incredibly grateful to him for the decades of service he has given us in the State of Georgia, and I am equally grateful to his wonderful family for the sharing him so freely with us. I will miss my friend in the Senate, but I join all Georgians in celebrating his service to our state and nation.”

“Johnny Isakson has been a standard of public service and statesmanship for decades in Georgia. He’s always drawn on his extensive roots in our state to deepen his advocacy for all Georgians. Johnny faithfully remembers the forgotten, including America’s veterans. I’ve looked up to him as a mentor and still work to emulate him."

“We thank Senator Isakson for his years of service to his state and country, and wish him all the best for his future. With now two Senate seats up for election in 2020, it has never been clearer that the path for Democratic victory runs through Georgia. We are the battleground state, and Georgia Democrats are ready to fight and deliver both the Senate and the presidency for Democrats across the country in 2020.”

"Johnny Isakson has been a steadfast conservative leader who has served Georgians with the highest integrity and distinction in the U.S. Senate. He will be missed, but we look forward to the men and women of Georgia electing another strong Republican leader in 2020 alongside David Perdue."

“The very first political event I ever attended was Johnny Isakson’s election night party when he was the Republican nominee for Governor in 1990. While the results didn’t turn out as we had hoped, he unknowingly inspired me, a cash-strapped college student, to consider a life of public service. In his 40 years of service, Johnny has shown unwavering dedication to our state and our country. He’s governed with grace and is admired and respected by all who have been lucky to serve with him. While his physical presence will be absent in the U.S. Senate, his legacy and dedication to Georgia families will live on through so many others, including me. Thank you, Johnny.”

“Senator Isakson is a statesman and a man of principle, and it is an honor to call him a friend. His retirement is a great loss for the U.S. Senate and the people of this great state. Derek and I wish Senator Isakson and his family only the best. We pray for his health and thank him for his lifetime of public service."

“When Johnny Isakson speaks, people listen. He is a true statesman, and it shows every day. It is my high honor to serve as Johnny’s partner in the United States Senate. Like so many Georgians, I was surprised and saddened to learn that he will not finish the rest of his term. Together, we are able to get real results for Georgia. Throughout his four decades of service, Johnny has always been a champion for the people of Georgia, especially our veterans. Bonnie and I are grateful for Johnny and Dianne’s leadership, and we are proud to call them our friends.”