Flanked by representatives from the Georgia film industry, Alyssa Milano said that restricting abortion will threaten Georgia women, families and the state economy. 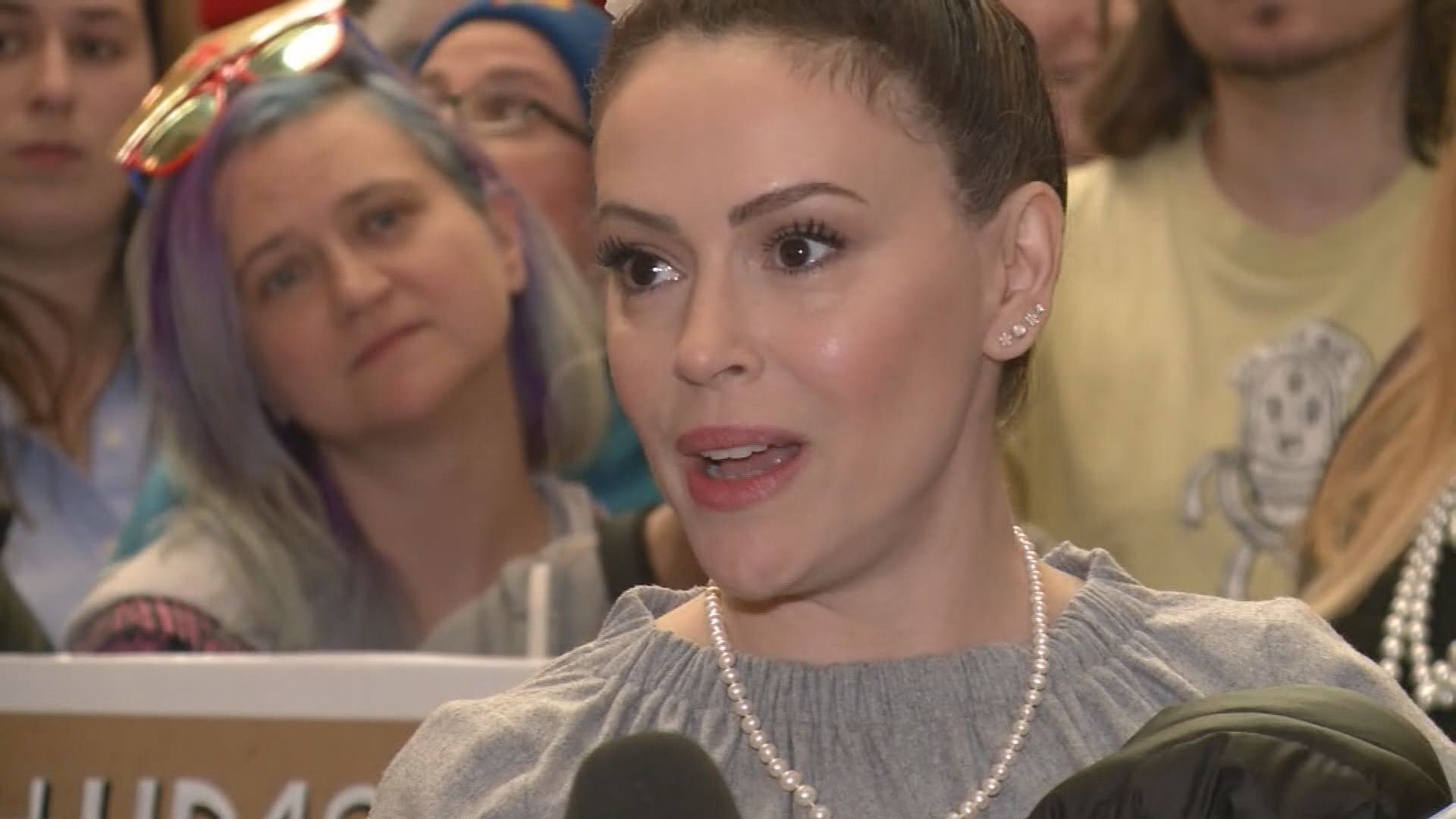 ATLANTA — Actress Alyssa Milano and members of the local film and television industry gathered outside Governor Brian Kemp’s office at the State Capitol Tuesday, hoping to convince him not to sign into law HB 481, a bill that would restrict abortions in Georgia.

The Georgia House of Representatives voted to approve the bill on Friday. It now heads to Gov. Brian Kemp's desk for approval.

The measure would outlaw abortion as soon as a doctor can detect a heartbeat in a fetus, limiting the window of time to 6 weeks of gestation.

Milano entered Kemp's reception office just after 5 p.m. to hand him a letter signed by over 40 other actors who oppose the bill, including Alec Baldwin, Amy Schumer, Colin Hanks, Rosie O’Donnell, Mia Farrow, Ben Stiller, Don Cheadle and Sean Penn, among others.

Inside the office, Milano was confronted by Rep. Dominic LaRiccia (R-Douglas) who asked if she was a Georgia voter and what district she lives in, after she handed over the letter. Kemp's receptionist would not allow her in to see him.

"I work here in Georgia ... I was hoping to take all of these voters in (Gov. Brian Kemp's office) to hand in the letter, but they weren't allowed," Milano said at the steps of the Capitol. "I was confronted by a man, who was middle aged, who asked me if I was a voter in Georgia. I said, 'no, but I work here and my industry employs over 90,000 people and there are over 30 Georgia voters outside that you won't allow in.'"

Surrounded by over 30 women, Milano addressed the media from the steps of the Capitol building.

"I am surrounded by amazing crew members and with the support of countless workers in the entertainment industry, to say that we reject this attempt to criminalize women for making decisions that work best for them in their lives," Milano said.

Milano is in Georgia working on the Netflix series, "Insatiable." She said that she requested to move production out of Georgia after Kemp became governor, but was blocked by "contractual obligations." She also mentioned that she tried to pull out of the production, herself.

"I tried to have my show moved after Stacey Abrams did not concede. Because of contractual obligations, they won't move the show. I can't leave the show," Milano said.

"As a taxpayer, as a homeowner, as someone who rents space ... the ramifications of losing Hollywood is not just about celebrity," Brown said. "It's about very real lives and taxpayers who have lived here, some of them their whole lives."

Milano added that "three other states" have offered similar tax incentives to the film industry, if it decides to pull out of Georgia.

"There are similar states willing to give us the same tax incentives that want to give us business," Milano said. "North Carolina had a thriving film industry until they passed a bill that infringed on human liberties."

Major features including "Dirty Dancing" and "The Hunger Games" were shot in North Carolina, but the passage of a bill that would restrict transgender people from using the locker rooms, bathrooms and showers of their choice shadowed the industry in that state. A bipartisan compromise did away with most of the requirements, imposing a moratorium on enforcing the laws until 2020. However, many states and cities have continued to ban government-financed travel to North Carolina, the Associated Press reported.

RELATED: The 'heartbeat bill': These are the winners and the losers in the abortion fight

"The entertainment industry is all-inclusive. What does it say if we don't stand up here and say, 'this is not ok?'" Milano asked. "When you ban abortion, women die ... we cannot continue to allow these white men, middle-aged men, to dictate what we're able to do with our bodies. It is not fair. We are taking a stand. Women, the industry, we are taking a stand. This is unacceptable."

The controversial "heartbeat" abortion bill has also been opposed by major companies in Georgia, including Coca-Cola and Amazon. A group of nearly 90 Georgia business professionals sent an open letter to the General Assembly stating their opposition.

The Writers Guild of America also sent an open letter warning that it could be “entirely possible” for the entertainment industry to leave Georgia if the bill is signed into law.

Governor Kemp praised the passage of the final version of the bill in the House, indicating that he would sign it.

"As actors, our work often brings us to Georgia. We’ve always found your state to be populated with friendly and caring people. We’ve found the hotels in which we stay and restaurants in which we dine while filming there to be comfortable and of a high quality. We’ve been glad to bring billions of dollars in revenue to support Georgia’s schools, parks, and communities.

"But we cannot in good conscience continue to recommend our industry remain in Georgia if H.B. 481 becomes law.

"This dangerous and deeply-flawed bill mimics many others which have already been deemed unconstitutional. As men who identify as small-government conservatives, we remind you that government is never bigger than what is inside a woman’s body or in her doctor’s office. This bill would remove the possibility of women receiving reproductive healthcare before most even know they are pregnant and force many women to undergo unregulated, hidden procedures at great risk to their health.

"We can’t imagine being elected officials who have to say to their constituents, “I enacted a law that was so evil, it chased billions of dollars from our state’s economy.” It’s not the most effective campaign slogan, but rest assured we’ll make it yours should it come to pass.

"This is the precipice on which you stand.

"We want to stay in Georgia. We want to continue to support the wonderful people, businesses, and communities that we have come to love in the Peach State. But we will not do so silently, and we will do everything in our power to move our industry to a safer state for women if H.B. 481 becomes law.

"You have a choice, gentlemen. We pray you make the right one."

With Love for the People of Georgia and in Solidarity with Women,