The event took place at 3:30 p.m. at the Smyrna Community Center. 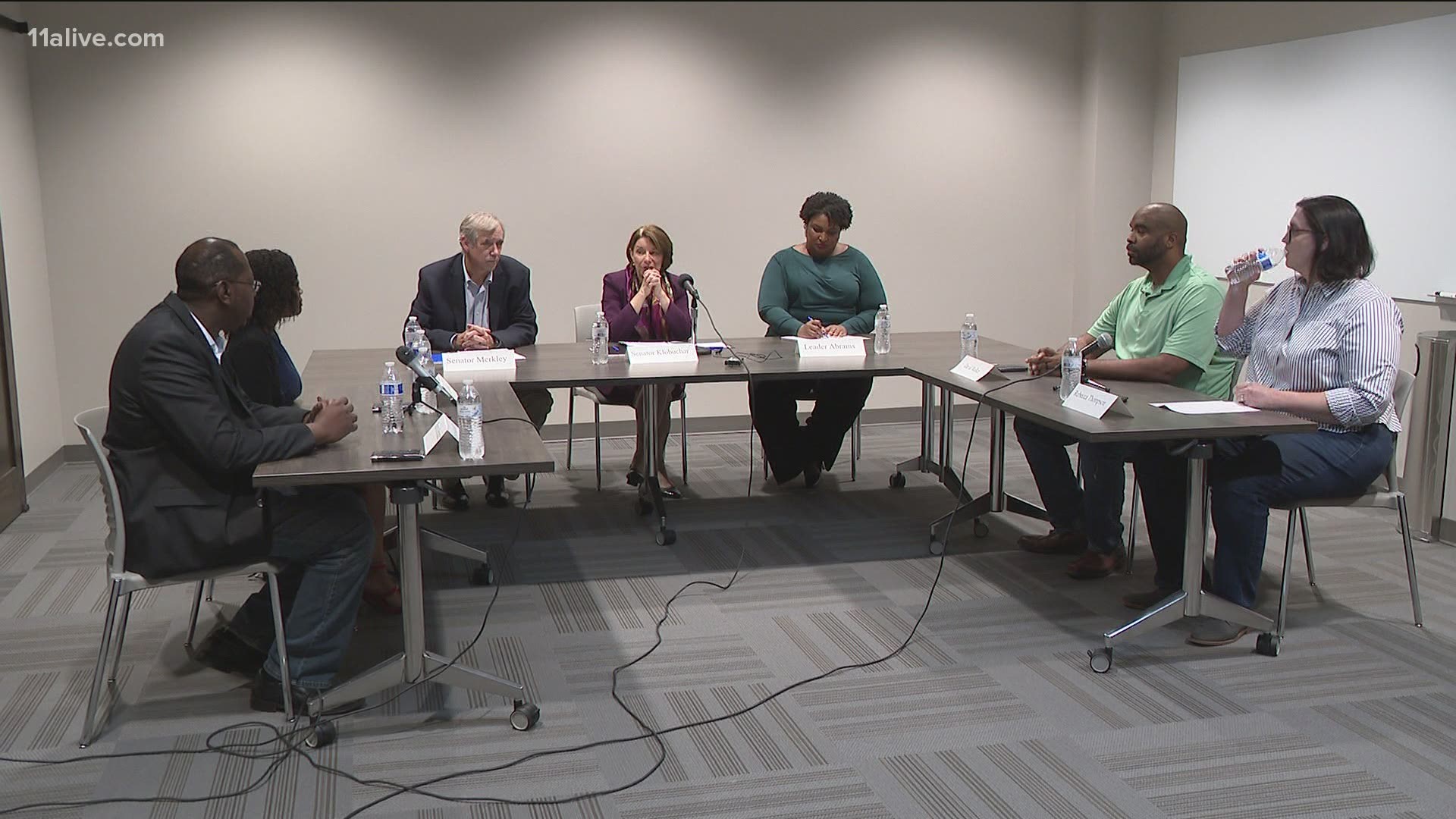 The event took place at 3:30 p.m. at the Smyrna Community Center.

The roundtable was conducted "with Georgia voters to hear about the obstacles they have faced when voting and discuss the urgent need to protect voting rights," a release said.

RELATED: Warnock among those to testify at rare Senate field hearing in Atlanta

The pair chose the Smyrna Community Center, the release said, for its symbolism as a "polling location serving a diverse community of Georgians that had five-hour lines during early voting for the 2020 general election and was closed during the Senate runoff election, forcing voters to travel a greater distance to vote."

During the roundtable's discussion, distance between polling locations and safety concerns arose.

One of the voters invited to speak was veteran Keli Benford, who said she stood in line for more than seven hours to cast her vote in 2020, "it doesn’t matter what side of the aisle you’re on...we’re all standing in that line and it’s uncomfortable for everyone.”

The Houston County resident was one of four Georgia voters invited to share their experiences voting in the peach state.

The roundtable comes with Sen. Klobuchar in town ahead of a rare Senate field hearing she has called for Monday in Atlanta, which will also examine the issue of voting rights.

Sen. Rev. Raphael Warnock will be among those testifying tomorrow at the hearing, being held by the Senate Rules Committee of which Klobuchar is chairwoman.

Others giving testimony include state Sen. Sally Harrell, Houston County voter José Segarra, and Helen Butler, the executive director of the Georgia Coalition for the Peoples' Agenda. Butler is also a former member of the Morgan County Board of Elections.

It is set to be the first field hearing by the Rules Committee in 20 years.

"At the hearing, witnesses will testify about recently enacted legislation to restrict voting in the state and the need for basic federal standards to protect the freedom to vote," a release by Sen. Klobuchar's office said earlier this week.

Democrats, likening it to "Jim Crow 2.0," have made opposition to Georgia's new voting law a central component of their political platform. Last month, Attorney General Merrick Garland announced the government would be suing the state over the law.

The new law institutes a range of provisions that will require ID for absentee ballots, scale back drop box access and restrict giving out food and water to those in voting lines, as well as adding a day of early voting.

Gov. Brian Kemp and Georgia's Republican leadership have fiercely defended the law, saying that the Democratic criticisms are based on distortions.

"This is the truth, SB202 ensures Georgia elections are secure, accessible and fair. It expands access to early voting, ensures that drop boxes are available in every county and secured around the clock," Gov. Kemp said in response to the Justice Department lawsuit last month. "It implements voter ID for absentee ballots, which nearly every poll shows an overwhelming majority of Americans support."