Activists discussed the crucial next steps in the movement, while the police chief gave his dual perspective as an officer and a Black man. 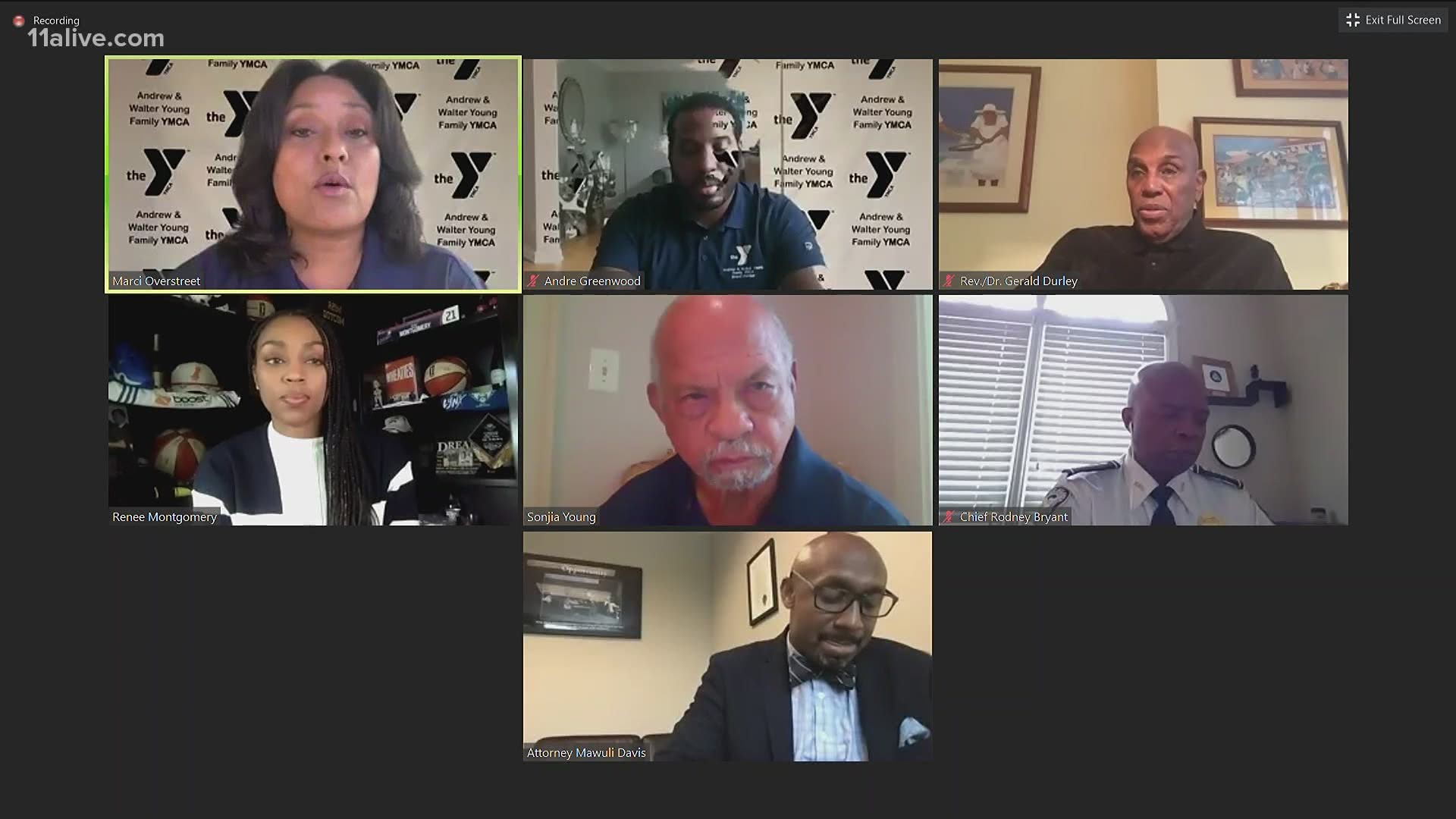 The hour and a half panel, titled "Past Hope, Present Change Program," took place on behalf of the Andrew And Walter Young YMCA. Lauren Koontz, YMAC Board CEO, explained the Y wanted to host a community discussion on how to implement change and promote equity inside and outside of the organization.

Atlanta Mayor Keisha Lance Bottoms briefly stopped into the panel to thank everyone who joined, and admitted she cried when she walked the tribute to the three Civil Rights activists.

Speaking of Lewis, Bottoms said, she didn’t think it was a coincidence that his last public appearance was in D.C. at the Black Lives Matter mural.

“I’d like to think of it as him was the passing of the baton,” said Bottoms.

The panel discussed the “natural changing of the guard”, from civil rights leaders of the 1960s to the younger generation now heavily involved in BLM.

Davis, 51-years-old, said it is the responsibility of the older generations to support young leaders trying to effect change.

“I’ve tried to provide legal training, to organize to march the streets with folks. It’s not us against them, we’re together. We can’t win unless there’s another generation of leaders coming forward," Davis explained.

"We have to stop waiting for invitations. If I see someone organizing something, I just go down We owe it this next generation to talk with them to share those experiences, so that they can get that information and apply it.”

Durley said he recently met with BLM activists, who were curious to know how older civil rights leaders achieved progress in the 60s. Durley explained he told them about strategies and leadership.

"You have to figure out who do you want to hear, what do you want them to hear, then come back and hold them accountable,” said Durley who also emphasized the importance of having a few outspoken leaders in the movement, similar to Dr. King or Congressman Lewis.

“Select the five or six leaders and don’t talk over them," he explained. "Get your strategies, select the spokesman for the leadership and then we have a movement. Otherwise we just have a bunch of people out giving speeches.”

The conversation between panelists naturally evolved from passing the baton to the issues BLM hopes to address, including policing policies and improving the relationship between law enforcement and the community.

Young discussed the need for law enforcement to be visible in the community to help foster positive relationships. Young, who volunteered with the Atlanta police department for a decade, recalled a time when the Y hosted a yearly basketball game between the police department and the sheriff’s office.

“We invited the community, gave law enforcement the opportunity to mix with the kids. We need to continue that,” said Young.

Durley touched what he feels is the biggest factor in keeping police and the community apart; ignorance.

“When you have ignorance on both sides, that’s when you have fear and you have to educate to alleviate the fear.”

He added communication was essential to improving relationships.

“You have to have the ability to communicate. And to have the ability to communicate, three things must occur, from the police side and the community side. We must understand each other," he said. "We cannot assume what a police officer is thinking and they can’t assume what an activists is thinking. Number two we have to respect each other’s difference. And the third thing, which is the big one, we have to trust each other."

Durley went on to say he’s far too familiar with going into “survival” mode when he’s is being pulled over by law enforcement. He said he wants to give law enforcement respect, but believes police feel the community no longer respects them.

Interim Chief Bryant chimed in, adding his dual perspective as an office and Black man.

“I hear a lot of you talking about fear when being pulled over. And I understand that fear, I really do. When I see the blue lights, my mind goes into the rundown of what happened. But I also recognize that generally I have to acknowledge that I have a gun in the car, and I have to have that conversation quickly I don’t want to be an ‘accident.’ I have to learn how to manage through those heighted situations,” said Bryant.

The long-time officer went on to explain Atlanta is a unique place, with years of having powerful Black input on the city, which allows the city to find solutions quicker than most places.

He said there’s a lot of room for police education but added activists and community members also need to hold each other accountable.

“As much as people say let’s call out bad police officers, we have to recognize that if there’s someone in your movement that is not consistent with your ideology, they need to be out," he added.

Besides law enforcement practices, Davis, who hosts a weekly forum where Black men can address their concerns, explained other factors the BLM is looking to address.

“We have to focus on the root cause of why we find ourselves in the situation that we do. So much attention is focused on law enforcement because it’s so visible but at the root, we’re still dealing with the issue of white supremacy,” said Davis.

Both Davis and Montgomery discussed how allies are crucial in breaking the chains of white supremacy.

“Allies need to work around anti-racist work; at your home, at your companies and corporations and that should manifest to allowing and affording Black, Brown and poor people better advantages,” said Davis.

Montgomery, who took off the 2020 season with the Atlanta Dream to focus on progressing the movement, said allies is one avenue to achieving unity in the community.

“We need allyship and we have to make allies out of people that wouldn’t be your allies.”

The panel said they were encouraged by the conversation but emphasized the importance of keeping the movement going during a critical time.

The group agreed, keeping the momentum going is important, otherwise the last few months and the change that’s been accomplished could start to fade from people’s memories; putting them back at the starting point.