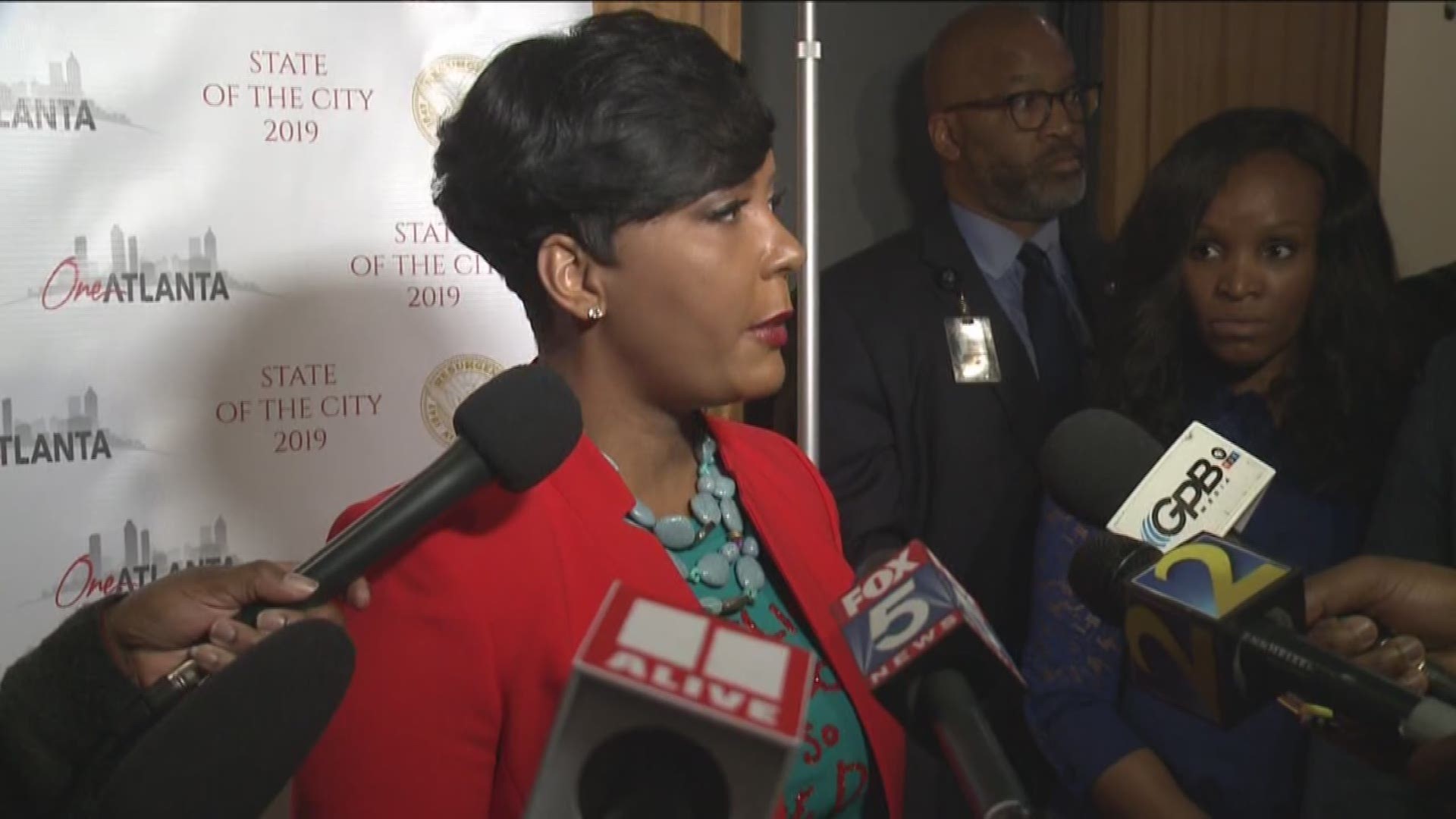 “Last May, I’d been in office only four months when I delivered my first State of the City address and I told you then that the State of our City was strong,” Bottoms said.

“I’m proud to say that Atlanta is a stronger city and that the best is yet to come.”

During her address, Bottoms covered a wide range of topics, from her proposal to create Atlanta's first Department of Transportation, to public safety, government transparency, infrastructure, affordable housing, public health and the city’s current operations of Hartsfield-Jackson International Airport.

Bottoms said there is a need to connect Atlanta’s public transportation options.

She cited personal stories of her grandmother riding MARTA for 30 years.

“Like my grandmother, there are many working families that rely on public transportation,” the mayor said.

She added current departments do a “good job” of addressing the city’s transportation needs. but believes they can have a greater impact if combined.

“The importance of public transportation extends beyond buses and trains. Atlanta has a Public Works Department that fixes our roads, we have a Planning Department that thinks about ways those roads can better serve people and we have TSPLOST, Renew Atlanta which has been entrusted with making long-term investments in Atlanta’s transportation future.”

The mayor said she now wants those departments working from the same “playbook.” 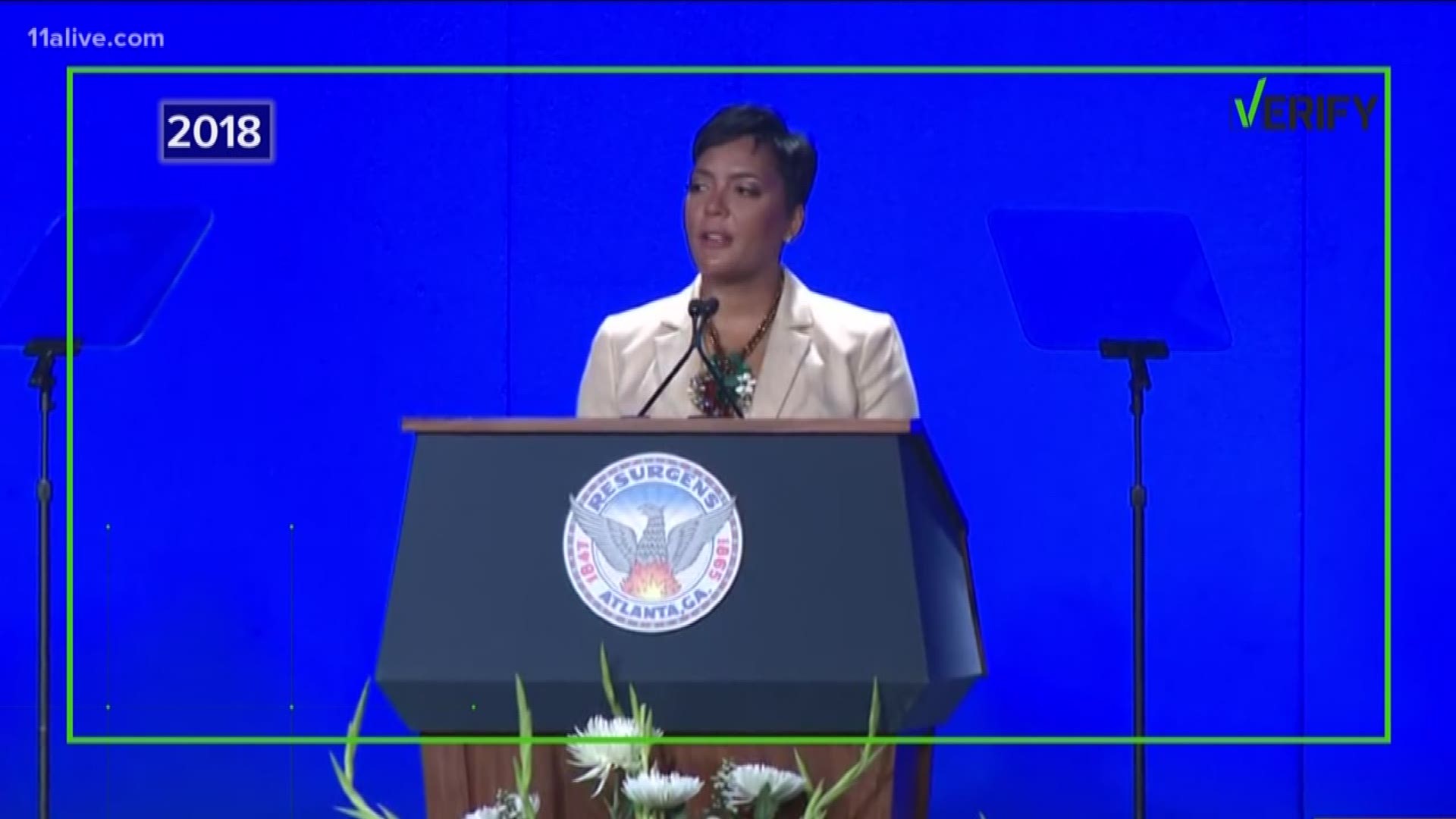 “I’m proud to announce that I’m creating Atlanta’s first dedicated Department of Transportation, a one-stop shop, combining the work of many of these departments to better deliver for Atlanta’s mobility future.”

The mayor called transportation the lifeblood of the city and she also focused on Atlanta’s operation of Hartsfield-Jackson.

In recent weeks, Mayor Bottoms has been very vocal against plans being discussed by state lawmakers for a state takeover of the airport, calling the plan "attempted theft."

Republicans have shown newspaper headlines covering the city hall corruption scandal though and tying it to the airport, even though prosecutors have not.

"When you’ve got scandals like this it bleeds on down. It bleeds down to the rest of us. And we’re supposed to sit here and take it. The answer is no, we’re not going to," state Sen. Renee Unterman (R-Buford) told the Senate.

"When we start talking about ethics, I don’t think our hands are clean in here either," countered state Sen. Emanuel Jones (D-Decatur).

The city has fiercely resisted a state takeover of the airport, saying the airport is wildly successful and a change would risk that success.

“Atlanta has owned and operated the world’s busiest airport for 21 consecutive years and the world’s most efficient airport for the last 16 years in a row,” Bottoms said in her address. “With Hartsfield Jackson Atlanta International airport operating at peak proficiency, we are more confident than ever in the power of Atlanta.”

A bill for the state takeover previously passed through the Senate and is now in front of the Republican-controlled House.

On the topic of public safety, Bottoms said since last year crime in Atlanta is down by two percent. She stated violent crime is down 15 percent and claimed police have taken more than 1,500 guns off the streets.

When discussing public safety, the mayor referenced the announcement she made in 2018 to raise police officer salaries by 30 percent, a raise she said was the largest pay increase for officers in APD’s 146-year history.

Since taking office, Bottoms on several occasions has discussed her desire to bring transparency to the mayor’s office. Shortly after being elected she announced a new online portal for anyone to view the city’s expenses.

During debates surrounding proposed development of the Gulch site in downtown Atlanta, many Atlanta citizens voiced concerns over a lack of affordable housing around the city.

During debates on the Gulch development, 11Alive talked with residents who worried about new developments near the city’s Westside pushing out long-time residents in low-income neighborhoods. It is a topic the mayor pledged to address moving forward.

RELATED: Atlanta's westside neighborhoods in the shadows of Super Bowl 53

“By 2026, our goal is to produce and preserve 20,000 units of affordable housing within the city of Atlanta. One of our top priorities is ensuring that longtime residents can remain in their neighborhood,” she said. “Gentrification is no justification for pushing people out of neighborhoods who’ve been there for decades.”

As the Gulch debate played out, the top rumor for its development included Amazon’s HQ2. Amazon has since announced it wouldn’t be building its new headquarters in Atlanta, but the mayor discussed the development of the massive parking lot covered hole in Atlanta’s downtown area.

“The redevelopment of the Gulch will introduce a new era of prosperity, energy and connectivity around Downtown and the Westside of Atlanta.”

When discussing the city’s infrastructure Bottoms mentioned the source of a headache for many Atlanta drivers. Potholes.

It is a problem any driver in Atlanta can gripe about, but the mayor believes progress is being made compared to before she was elected.

Bottoms also pointed to several executive orders she has signed since being elected, including the elimination of cash bail bonds and ending a relationship with ICE to disconnect the city from federal policies that separated immigrant families.

With CDC reports showing Georgia and Fulton County specifically outpace the rest of the country for new HIV infections, Bottoms claimed she is addressing the issue in a unique way.

The mayor mentioned setting aside money to combat the high rate of HIV and AIDS in Atlanta. She claimed this budget item would be a first in the city’s history. She also stated her office is hiring a Chief Health Officer to develop strategies to target the rate of new infections.

When the city hosted the Super Bowl, headlines reporting human trafficking arrests and stings made national headlines and put a spotlight on the issue around the Atlanta area. Bottoms in her address said the city has trained first responders and more than 10,000 volunteers to look for, recognize and how to report suspected human trafficking.

RELATED: She came to Atlanta to be in a music video. He told her she'd dance naked and sell her body.

At the end of her speech, Mayor Bottoms stressed the need for a unified city which is looking toward the future.

“We will continue to build a more affordable, a more resilient and a more equitable city. Atlanta, I believe we can and so we will. The best is yet to come,” the mayor said as she closed her address to the city.

Read Bottoms' full State of the City address on the City of Atlanta website.

Georgia lawmakers announce special guests to State of the Union