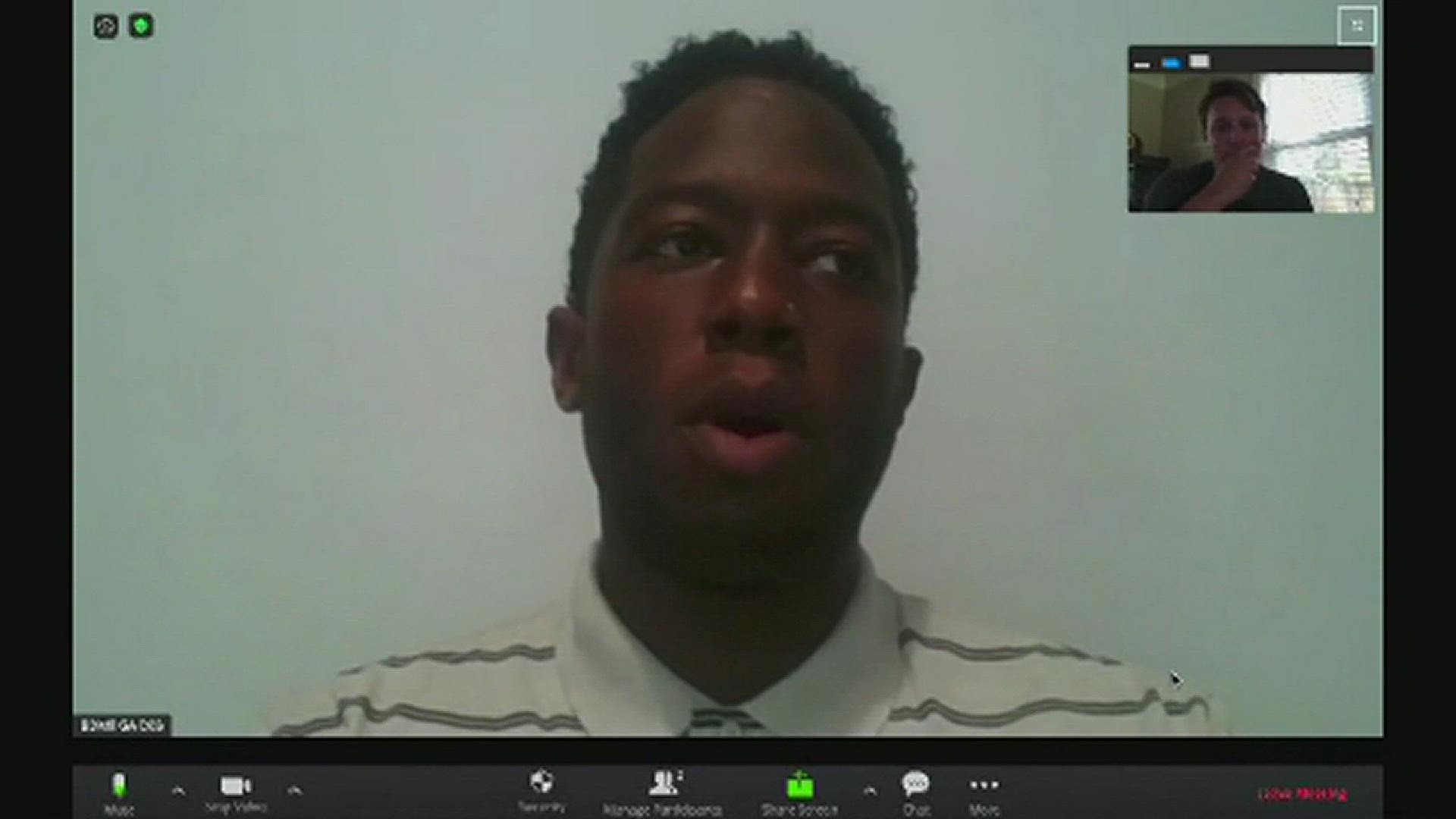 ATLANTA — Rep. John Lewis is, politically, as indestructible a force as they come.

He has represented Georgia's 5th Congressional District, which covers most of the city of Atlanta and some suburban parts, for 33 years. A living Civil Rights hero for the city, known as the cradle of the Civil Rights Movement.

He has gotten less than 70 percent of the vote in a general election only once, and that was a generation ago. Many years he runs completely unopposed.

He's only faced a primary challenge three times, and all of them (one year there were two) have failed to crack 20% against him.

It is against that formidable record that a 32-year-old special needs educator hopes to spring what would be the most incredible of upsets on Tuesday. Barrington Martin II is Congressman Lewis' pro-universal health, pro-universal income, pro-marijuana legalization, and pro-Second Amendment challenger in the 2020 Democratic primary.

While he's not unaware of how ambitious a challenge it is he's chosen, he said it's actually the natural product of Lewis' life's work.

"One thing that has always stuck out to me - and this is 'cause I've read all of John Lewis' books to this point - he always talked about good trouble, and I feel like I am basically the embodiment of that," Martin II said. "I am the work he put in. The seeds that he sowed a long time ago - I'm the fruit harvested in 2020."

He acknowledged he's "been catching a lot of slack for this primary" against John Lewis - John Lewis! - but he says it's not about the Civil Rights icon.

"I can never talk bad about him, never disrespect him, because without him there would not be a me," he said. "It's not necessarily me going against Congressman Lewis. It’s me doing the work for the people of the district."

As an East Atlanta native, and a graduate of Cedar Grove High School, then Georgia State University and now an educator at McNair Discovery Learning Center, it's his district - the only district he's ever known.

And he said that what he's seen in his community is an Atlanta that has flourished as Lewis has represented it, but also left many behind.

"I've seen the changes that have occurred in the city, but in the same time, in my opinion, the city has been stagnant as well," Martin II said. "If you do your homework, you look at the numbers, you look at the poverty rate, then you look at the wealth gap, things of that nature - you just go outside and see how many homeless people there are. We live in America, we live in a land of abundance. No human being should be homeless, kids should not be starving in America."

His prescription is a now-familiar one coming from insurgent-left candidates - a twin-policy of universal healthcare and universal income known as the "people's bailout."

"A lot of our social safety nets are terrible. Let's just call it what it is, they're terrible. They're means-tested and they don’t necessarily do the job they're supposed to," he said. "I wanted to pair universal guaranteed income on one hand and universal healthcare, and put those two things together and they create this ideology I call the people's bailout. Those two policies together, I feel, will allow Americans, and people in general, to have the liberties and the freedoms they deserve."

He has other eclectic positions - he wants to legalize marijuana, believes strictly in terms limits and made a campaign promise not to serve more than five, and he's a supporter of Second Amendment protections.

"As we've seen right now, I feel that with how the riots and the things that occurred, even with our president stating that he was going to use military force on his own citizens - that is ridiculous," he said. "That is why the Second Amendment is very important."

New York Rep. Alexandria Ocasio-Cortez is the now oft-cited example for brash Millennials who think they can unseat a congressional fixture, and Martin II said he does feel aligned with her in some senses (though his favorite politician of all-time is JFK).

It's time, he said, for a more representative House of Representatives. The median American age is about 38. In the House, it's 58.

"There's a lot of leadership that are in the position to make decisions for Americans who are archaic, in a sense. Because if the job was done - you’ve been in the office more years then I've been alive, and either your methods haven’t been fruitful or you haven’t been doing your job," he said. "It's important for people to be asking these questions. Why are we still dealing with the same things we dealt with in the 60s?"

"I want to see myself as one of the leaders of the 'new school,' because I know what's going on, I'm down here. When our riots happened Friday, I was downtown first thing Saturday morning cleaning up, speaking to the people, seeing what's going on, seeing how they feel. And we don’t get that from our leaders," he added. "Our leaders are so far up, they don’t even understand the problems of the people that they're supposed to serve."

He said to this point, in no small part because of limitations due to the coronavirus pandemic, much of his campaigning has involved online outreach (though he said he has set up every weekend at Piedmont Park to chat with passersby from a distance and make himself visible).

He hopes it's enough to pull off the shock of the century on Tuesday. If it's not, though, he said he would forge ahead with politics. At 32, he has plenty of time.

"Hopefully the results come out Tuesday and the time has passed (for Lewis), but even if it's not past, the work still needs to be done," he said. "And at some point in time, I will be able to assume the role that I need to assume for the people."