Georgia Sec. of State writes he's being 'thrown under the bus' by Trump 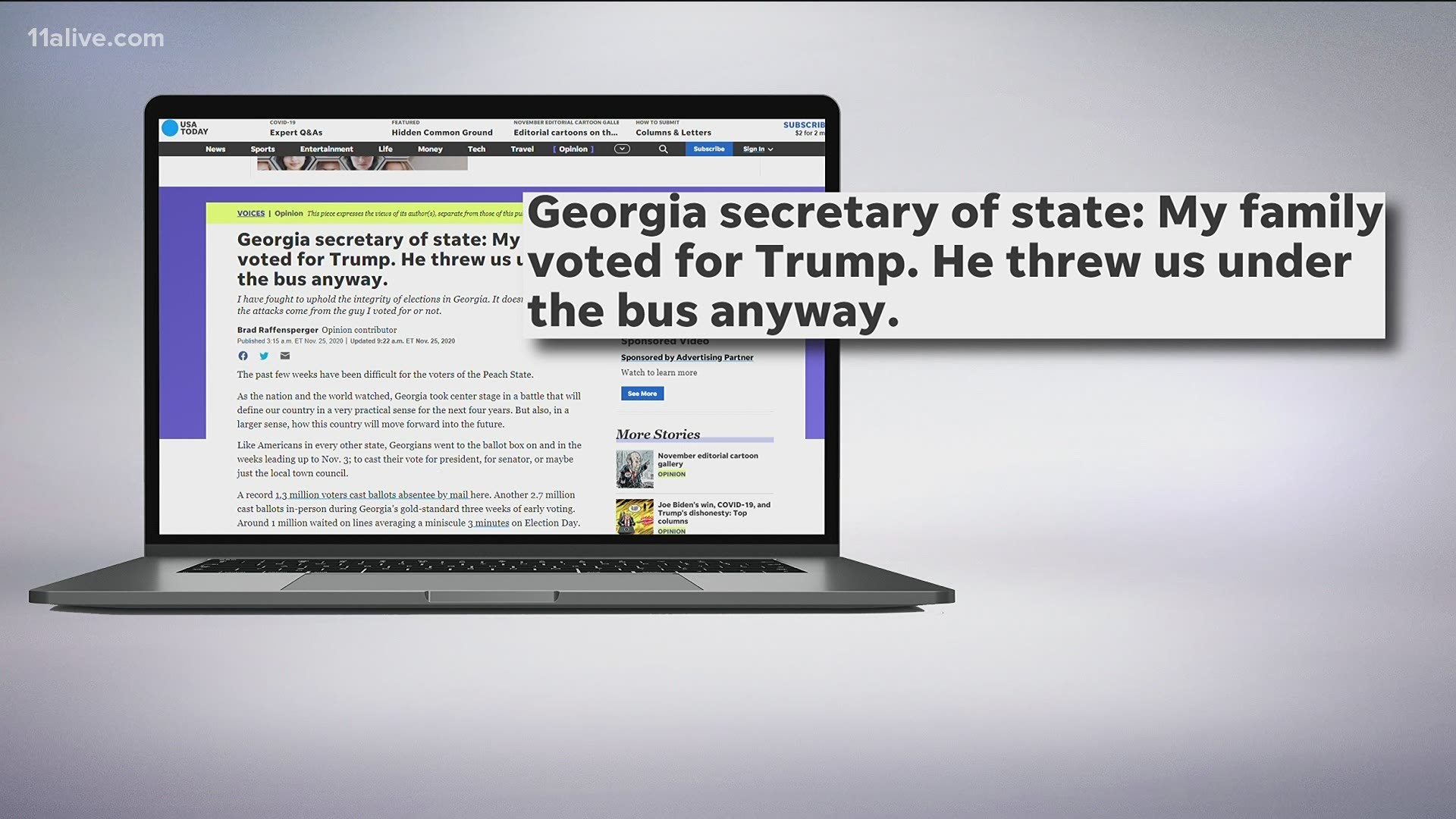 ATLANTA — Georgia's Republican Secretary of State Brad Raffensperger wrote in an editorial published Wednesday morning by USA Today that he voted for President Donald Trump - and now he feels he's being thrown under the bus by him.

"By all accounts, Georgia had a wildly successful and smooth election. We finally defeated voting lines and put behind us Fulton County’s now notorious reputation for disastrous elections. This should be something for Georgians to celebrate, whether their favored presidential candidate won or lost," Raffensperger writes. "For those wondering, mine lost — my family voted for him, donated to him, and are now being thrown under the bus by him."

The embattled elections official has faced a great deal of pressure from his own party - both inside and outside Georgia - to accommodate the demands of the president and his allies in the Peach State.

Raffensperger alludes to that pressure in his USA Today piece, writing of the post-election atmosphere in Georgia: "A losing presidential campaign refused to accept the facts, following a playbook written by a failed gubernatorial candidate two years before. A failed Senate candidate with nothing to do tried to undermine the integrity of Georgia’s elections. A self-described “attorney for the damned” took up the cause."

There, the secretary is referring first to President Trump's campaign (following the playbook, he argues, of Stacey Abrams' losing 2018 gubernatorial campaign), Rep. Doug Collins as the "failed Senate candidate with nothing to do," and attorney Lin Wood, who filed suit to stop Georgia's election results from being certified and failed.

After accommodating the request for a hand recount made by the president's team in Georgia, led by Collins, the secretary now faces increasing calls - including from Trump himself - to conduct an audit of the signatures on envelopes of mailed-in absentee ballots.

"Elections are the bedrock of our democracy They need to be run fairly and, perhaps more important, impartially. That’s not partisan. That’s just American," Raffensperger writes. "Yet some don’t seem to see it that way."

You can read the full piece at USA Today's website.