The move is unlikely to succeed with a two-thirds majority vote needed for a member of Congress to be expelled. 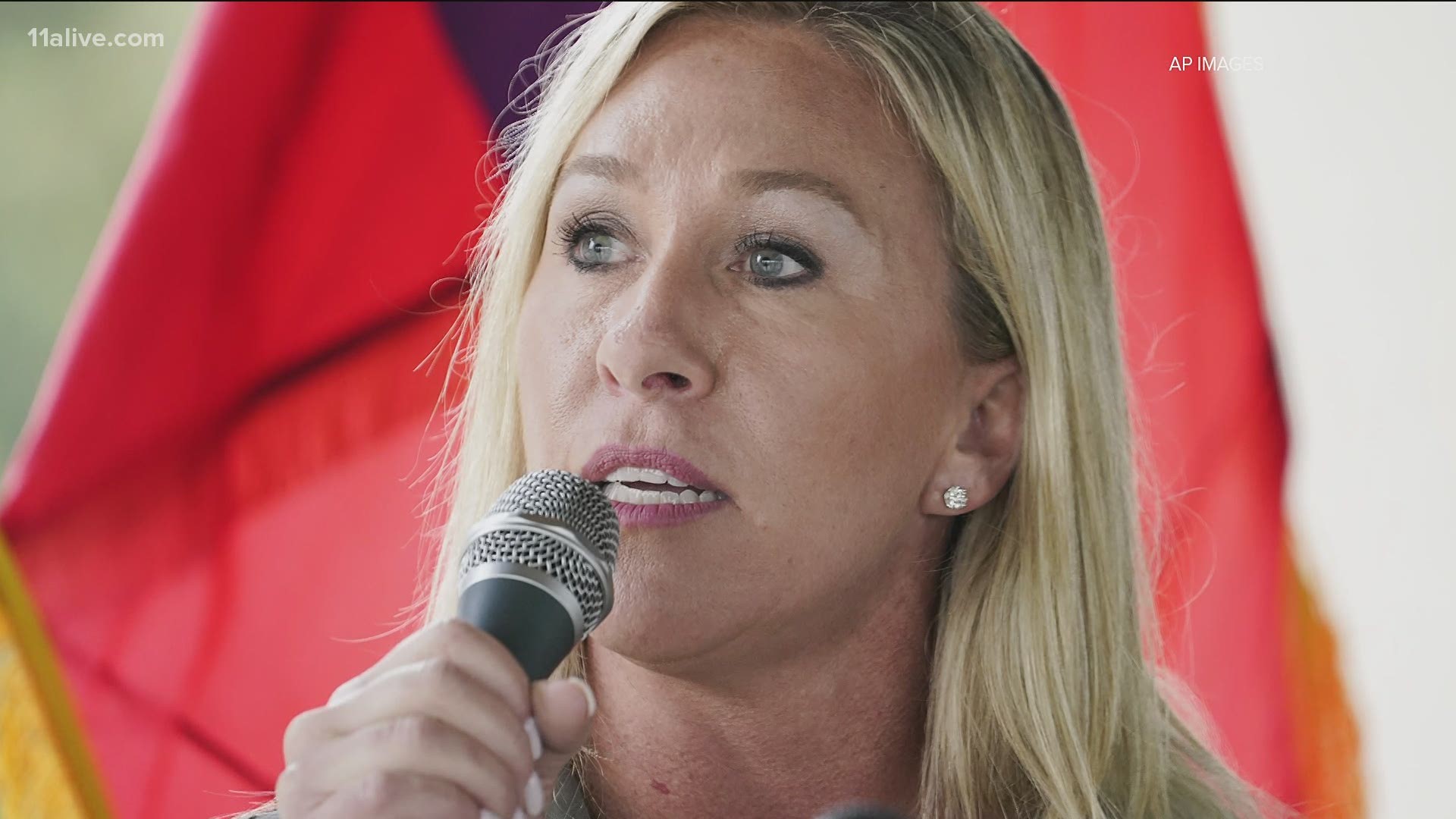 ATLANTA — Georgia 14th District Rep. Marjorie Taylor Greene said that "Democrats and their spokesmen in the Fake News Media" were coming after her, in her response to a California Democrat's promise to introduce a resolution to have her expelled from Congress.

The move is not likely to succeed, with a two-thirds majority vote required in the House for a member to be expelled. With the current balance of the chamber, Democrats would need more than 60 Republicans to join the effort to remove the newly-elected Georgia Republican.

According to CNN, Taylor Greene had made dozens of posts and comments during 2018 and 2019 during which she had called for the execution of prominent Democrats.

CNN said Thursday that she had deleted videos she had posted on Facebook Live where she said House Speaker Nancy Pelosi was "guilty of treason" and that she will "suffer death or she'll be in prison" for her "treason."

On Wednesday evening, 11Alive News asked Taylor Greene's office, "Will Rep. Taylor Greene send a statement on her reportedly supporting Facebook posts that advocated violence against Democrats, and a California congressman's plan to introduce a resolution to expel her from Congress?"

Taylor Greene responded to 11Alive in an emailed statement, "Democrats and their spokesmen in the Fake News Media will stop at nothing to defeat conservative Republicans.

"They are coming after me because I’m a threat to their goal of Socialism.

"They are coming after me because they know I represent the people, not the politicians.

"They are coming after me because like President Trump, I will always defend conservative values.

"They want to take me out because I represent the people. And they absolutely hate it."

Rep. Taylor Greene did not address the Facebook posts.

Only five House members have ever been expelled before, three of them in 1861 for fighting for the Confederacy. Ex-Rep. James Traficant was the last to be expelled, in 2002, for a bribery conviction.

Rep. Greene has drawn significant scrutiny over the last couple weeks, following reports of incendiary past social media posts and advocacy of a conspiracy theory that the 2018 shooting at a high school in Parkland, Fla. was staged.

On Wednesday, a tweet by a father of one of the Parkland victims, Fred Guttenberg, showed Greene in a video following after David Hogg, one of the Parkland students who drew a high profile for gun control advocacy after the shooting. In the video, Greene repeatedly asks him questions about his advocacy as he tries to walk away.

It's not clear when the video was originally taken, though Guttenberg indicated it was from shortly after the shooting in 2018.

"@mtgreenee, is this you harassing @davidhogg111 weeks after the Parkland shooting, that my daughter was killed in & he was in? Calling him a coward for ignoring your insanity. I will answer all of your questions in person," he wrote.

Greene did not directly respond to the call by Rep. Jimmy Gomez for her expulsion, but retweeted another father of a Parkland victim, Andrew Pollack, who said Democrats are trying to expel her "because she’s an avid defender of President Trump."

"I stand with Marjorie!" Pollack wrote.

The video was also shared by Rep. Ted Deutch, the Democratic chairman of the House Ethics Committee, which would likely review any resolution to have her expelled and determine whether it would go to a floor vote or not.

Deutch is the Florida congressman whose district includes Parkland. His tweet referred to the conspiracies that have sprouted around the 2018 school shooting as "cruel, despicable lies."