Would cutting off mics fix the presidential debates?

There were a number of calls to give moderators more control during last night's rancorous first debate between President Trump and Joe Biden. 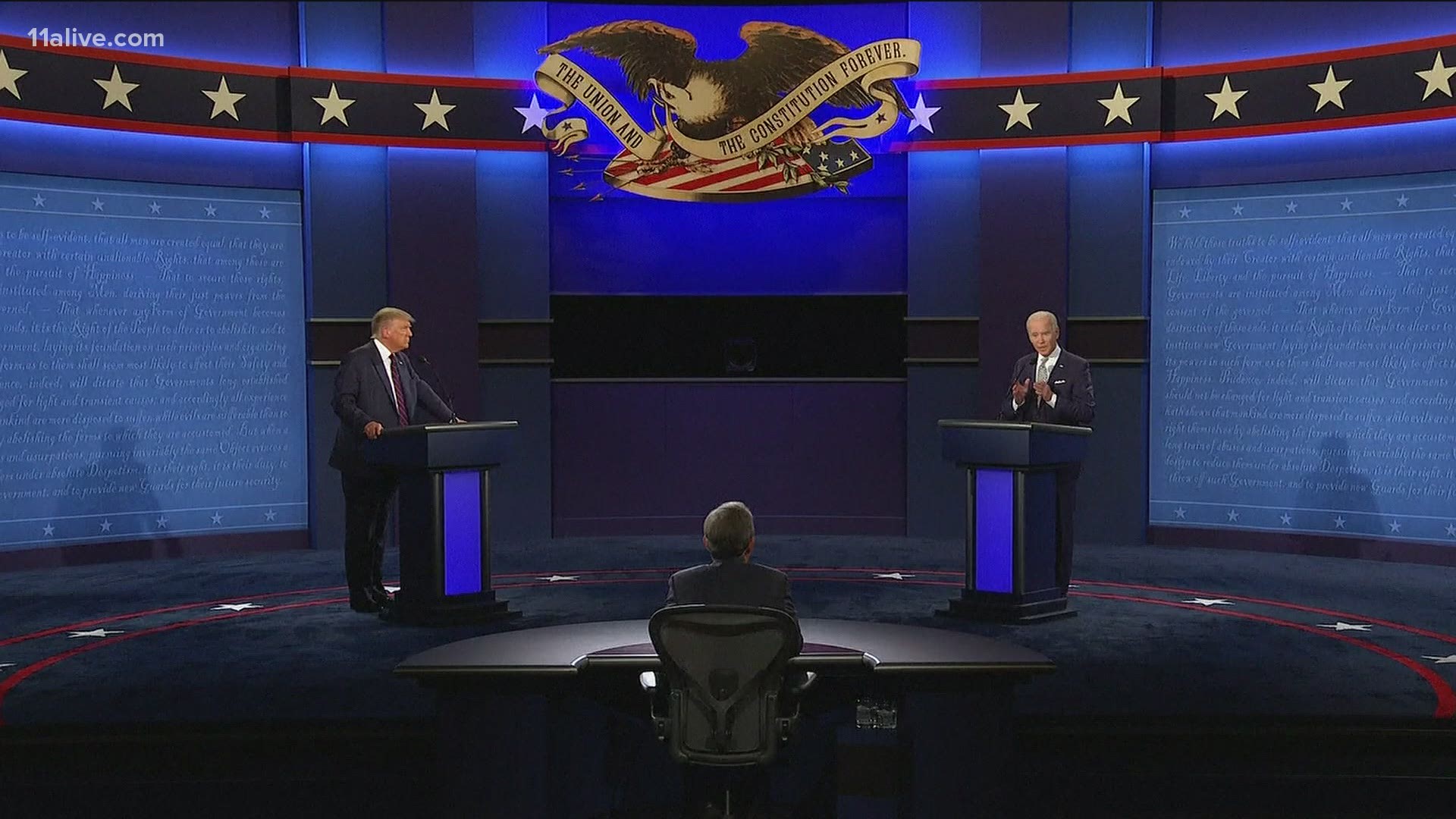 ATLANTA — After a first presidential debate that was most noteworthy for descriptions like "chaotic," America finds itself with a strange quandary: How to get two adults to speak one turn at a time.

The debate was marked by President Trump's frequent interjections, often rhetorically overwhelming former Vice President Joe Biden, to the point where he snapped, in an unpolished moment that will probably serve as the lasting image from this very unpolished debate: “Will you shut up, man?”

Chris Wallace of Fox News, in the unenviable position of moderator, was both critiqued from the left for being unable to reign in Trump, and from the right for sometimes trying so hard to reign him in it seemed like he was the one debating the president.

One simple idea seemed to catch on as the debate descended into a messy spectacle: Turn off the mic if someone just won't stop talking.

Future moderators need to have the capacity to cut off the mics.

"Wallace needed, at the very least, a mute button. Maybe something stronger. A penalty box? A stun gun?" Washington Post media columnist Margaret Sullivan wrote. "Failing some radical reform in the debate format, there’s no reason for the next two debates to take place as scheduled on Oct. 15 and 22."

RELATED: World reacts to 'chaos,' 'rancor' in US presidential debate

The organization in charge of instituting such radical reform is the Commission on President Debates, and it's not clear if they'd actually considering doing something like that.

Rich Lowry on tonight's debate: “I wouldn't be surprised if there's not another presidential debate in this cycle. At the very least, I think the presidential debate commission has to consider cutting off the mics.” #Debates2020 pic.twitter.com/awLONyxGa9

It's a tempting solution - and enjoyed seemingly bipartisan support on Tuesday night.

But would it work?

Ryan Wood at 11Alive's TEGNA sister station in Dallas, WFAA, offered a few counterpoints to the popular calls for cutting off mics:

Turning off the mic isn’t a viable option.

1) It encourages a candidate to speak louder to be picked up over other microphones.

2) It can be viewed by audiences as bias.

3) Candidates can use this as an argument to delegitimize the process. https://t.co/AAgqWDA8qJ

The first point is an interesting one. Say you cut off Trump's mic - and then he just starts shouting. Then what?

Still, it might be possible that the experience of having your mic go silent is jarring enough that it snaps someone, at least momentarily, into silence.

The second point is hard to argue - conservatives already felt Trump was disproportionately targeted with pushback by Wallace, however warranted it might have been.

The question then becomes - does that matter? The two sides in American politics are, after all, pretty predisposed to see bias in the matter regardless.

RELATED: Trump, Biden lash out, interrupt each other throughout first presidential debate

But there's a tricky matter in there that the specific power to cut off mics does introduce, which normal cajoling (however ineffective) does not - what happens if a moderator is seen as too quick to cut mics? What if they cut mics off too much, or too little?

The same critiques about a lack of control seem like they could just as easily exist in a world where mics can be cut off.

As for whether candidates would say cutting off mics delegitimizes the debates, that seems perhaps like a secondary concern at the moment when voters increasingly seem to see the debates as already delegitimized.

But yes, it's worth wondering if candidates do take it as an excuse to skip debates entirely, will we lose something - imperfect though it may be - we can't necessarily get back?

One thing seems certain: If the debate commission doesn't make any changes, it doesn't seem particularly likely the next debate will go much differently - bringing us right back to this question again.