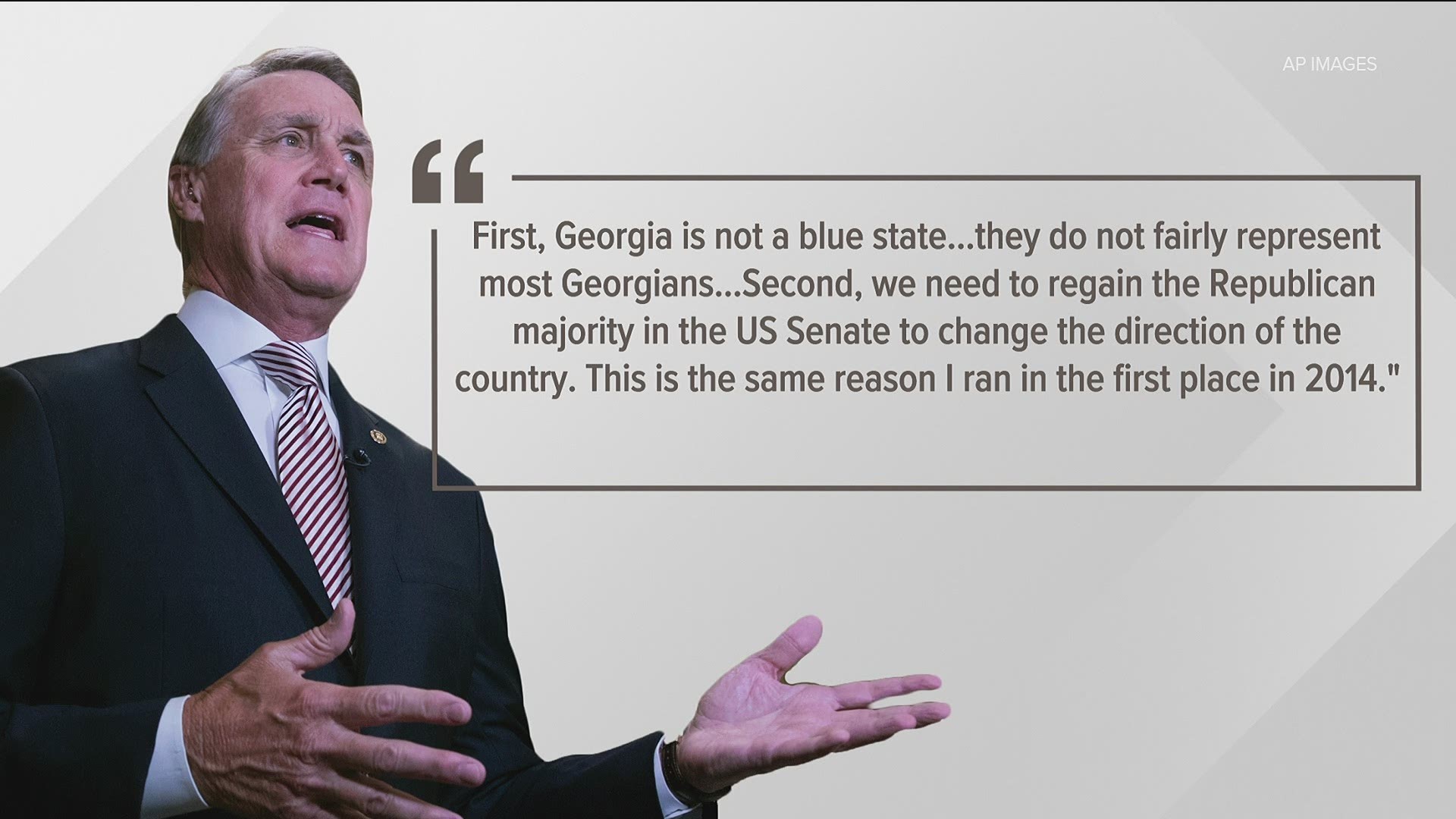 The 71-year-old Perdue filed a statement of candidacy Monday with the Federal Election Commission.

He confirmed the news on Tuesday via Twitter and said he's doing it for two reasons. The first being that "Georgia is not a blue state" and the second being that "we need to regain Republican majority in the US Senate."

Bonnie and I are considering running in 2022. Here’s my note on why: pic.twitter.com/Wnyt0tB3th

It's an early step toward a possible bid to return to Washington. Perdue lost his reelection bid during a closely watched runoff last month against now-Sen. Jon Ossoff.

Democrats' wins in Georgia's dual runoffs helped Democrats take control of the Senate for the first time since 2011.

Ossoff will not be up for reelection until 2026, but Warnock’s term expires in two years.

Here is the full statement:

Yesterday, I filed federal election paperwork for the 2022 US Senate election in Georgia. This was simply a necessary legal step that will allow me to continue to keep all options open.

Bonnie and I are considering running in 2022 for two primary reasons:

First, Georgia is not a blue state and yet, as I write this today, the people of Georgia are represented by two of the most radically liberal individuals to ever occupy a seat on the hallowed floor of the United States Senate. They do not fairly represent most Georgians. That was demonstrated in my November General election when we beat the Democrat by almost two points and they didn't even get 48% of the total vote. More than 52% of Georgians rejected my opponent and the liberal Democrat agenda. Five million Georgians, the most ever, voted in that General election and it is the best poll of where Georgia is right now.

Second, we need to regain the Republican majority in the US Senate to change the direction of the country. This is the same reason I ran in the first place in 2014 when we had heard evidence of how the Obama administration had failed. That administration gave us the lowest economic output in US history while doubling the debt of all previous presidents. Today, we can already see the impending damage that America will suffer from the Biden administration. Many believed that Biden would govern as a moderate but in less than a month we can clearly see how he has given into the radical side of the Democratic Party.

Executive orders like the one that kills the Keystone Pipeline will have devastating consequences on the most vulnerable among us. Because we already have clear evidence of how radical the Biden administration will be, it is imperative that Republicans regain the majority in the US Senate in 2022 to have balanced government.

Just as my runoff election determined the majority in the US Senate, this 2022 Senate race in Georgia will also determine the majority and will be the focal race in America once again.

Over the next few weeks, Bonnie and I will diligently consider our options about how to best serve the people of Georgia. My mom and dad were public school teachers who really cared for their students and they instilled in me this drive to lead and to serve. If we decide to run, we will need your help once again. Thank you for everything you have done for us. We take that very seriously and will forever be in your debt.