The Democratic debate in Atlanta: What to watch for

When the candidates hit the stage at Tyler Perry Studios on Wednesday evening, they'll be looking to prove themselves to a pivotal 2020 state. 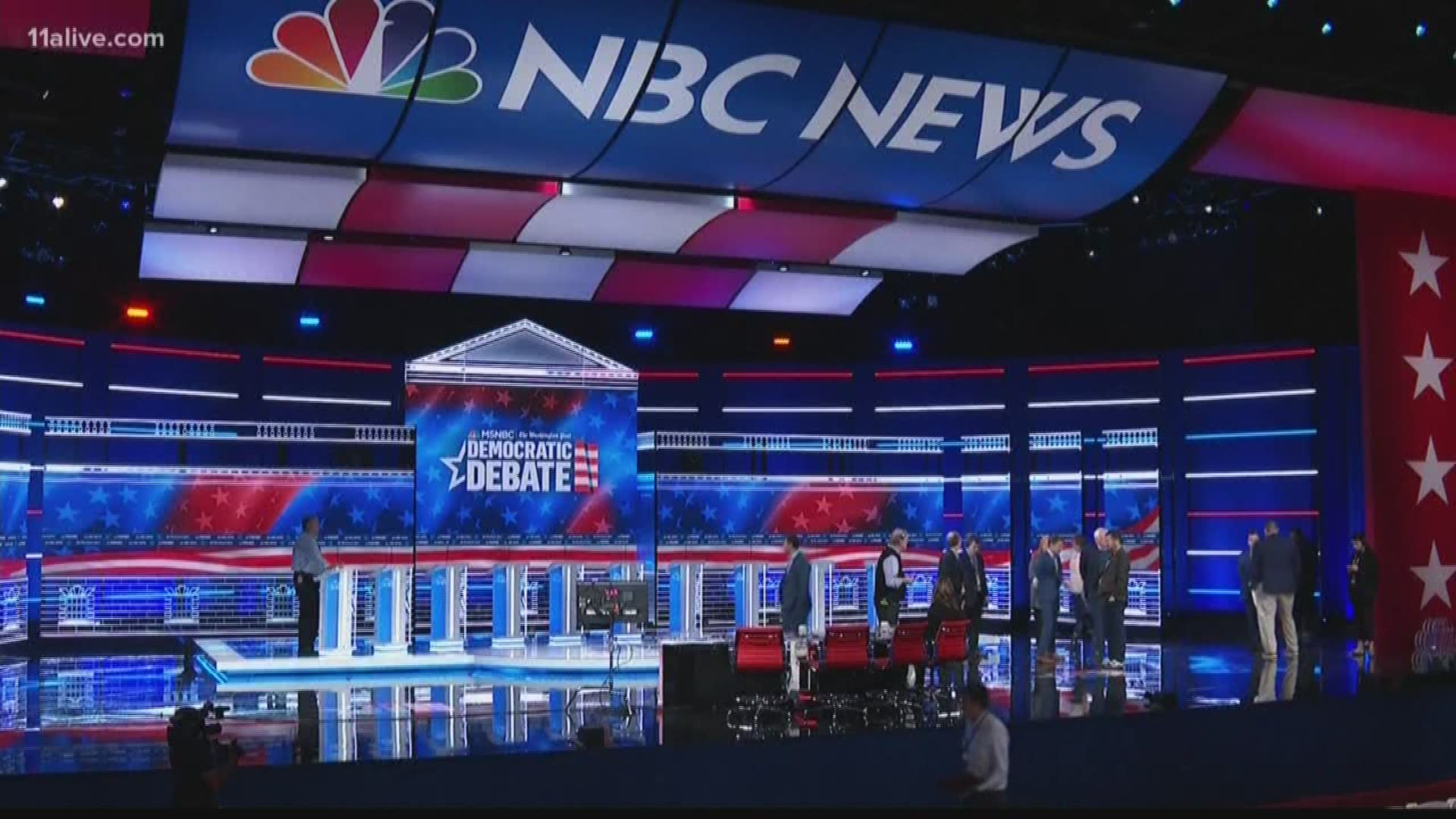 ATLANTA — When 10 Democratic candidates step up to the podium at the Oprah Winfrey sound stage at Tyler Perry Studios on Wednesday night, the biggest question will be if any of the pack can put a dent in Joe Biden's armor here.

When Hillary Clinton pulled away from Bernie Sanders in 2016 on Super Tuesday, she did so with a firewall of Southern support, winning states like Georgia, Alabama, Arkansas, Tennessee, Virginia and Texas.

Georgia was one of her biggest wins, where she got more than 71 percent of the vote.

In that vein, candidates seen as more liberal like Bernie Sanders and Elizabeth Warren will be using the Atlanta debate as a way to pitch themselves to the South, where polling suggests Biden might enjoy a similar firewall.

RELATED: Democratic debate in Atlanta: Everything you need to know about the event today

Polling done by SurveyUSA for 11Alive ahead of the debate gave the former vice president nearly 40 percent support in Georgia, nearly 10 points better than his Real Clear Politics national average.

He's followed Vermont Senator Sanders, at 18 percent, and Massachusetts Senator Warren, at 14 percent. Mayor Pete Buttigieg of South Bend, Ind. and Sen. Kamala Harris of California each maintain 7 percent support in Georgia, according to the poll.

That's a long mountain to climb for the field.

There are some points of optimism, though. Polled purely against President Donald Trump, Biden takes a 47-43 advantage - hardly any better than Sanders' 47-44 edge. Warren, too, outpolls the president 46-45.

But they will have to overcome a great deal of institutional support for Biden, nonetheless. Atlanta Mayor Keisha Lance Bottoms, one of the most prominent Democrats in the state, has already endorsed him.

Georgia Democrats are broadly considered more moderate - the state standard-bearer, Stacey Abrams, is for instance not a vocal supporter of "Medicare-for-all," a litmus test for the left wing of the party.

Whether Sanders and Warren can maintain their liberal bonafides while appealing to Georgia's left-of-center Democratic voters will be an interesting balancing act.

Biden, meanwhile, will be looking for a strong, composed debate performance that reinforces existing support.

Harris and Buttigieg present interesting cases, as well. The California senator has to this point struggled to generate much momentum, but as the only black woman in the field could try to tap into the same energy in Georgia that helped propel Abrams - in 11Alive's polling, she polled even with Warren (11 percent) among black voters.

Her record as a prosecutor and California attorney general, however, has been met with strong skepticism by racial justice advocates.

RELATED: This is what Tyler Perry Studios looks like for the Democratic debate in Atlanta

Buttigieg, meanwhile, has polled well in heavily white early-voting states like New Hampshire and Iowa, giving him something of a frontrunner shine, but it's not yet clear he can cultivate a base of support among the black community. He has faced sharp criticism for how he has addressed the needs of black citizens in the city he leads, South Bend, and more broadly has not polled well among black voters.

In 11Alive's pre-debate polling, Buttigeig polled at just 2 percent among black voters - worse than any candidate, including a generic "Another Democrat" which polled at 3 percent.

And it's still possible one of the wildcard candidates at the back of the field will distinguish themselves. The campaign of entrepreneur Andrew Yang has been energized by a young base of support and a unique pitch - the "freedom dividend" that would promise a basic income of $1,000 a month to every American - that has kept him in the race as a darkhorse sleeper.

Yang has planted a flag in Atlanta for this debate with a number of events organized around his campaign, including a fundraiser where he'll personally appear on Thursday.

Rep. Tulsi Gabbard of Hawaii also enjoys a passionate base of support, and has made a brand out of clashing with the Democratic establishment. Billionaire Tom Steyer, perhaps best known for his ads arguing for impeaching President Trump, was a late entry to the campaign who is still trying to make an impact, as well. Both those candidates' campaigns organized official watch parties in Atlanta.

It may also be a last chance for the campaigns of candidates with formidable profiles in Sen. Amy Klobuchar and Sen. Cory Booker to finally gain real traction.

RELATED: Stacey Abrams would be 'honored' to be vice presidential candidate in 2020 general election

Whoever emerges out of the Democratic field as the eventual nominee will likely hope they left an impact here.

Abrams could be a prime vice presidential who would be a potential game-changer on the ticket in Georgia - a state Democrats prize for its potential to flip in 2020.