Disability advocates say 6,000 families in crisis, getting no help from Georgia

The current Georgia budget would not allow for any additional Medicaid waivers, even though more than 6,000 families are on the waiting list for help 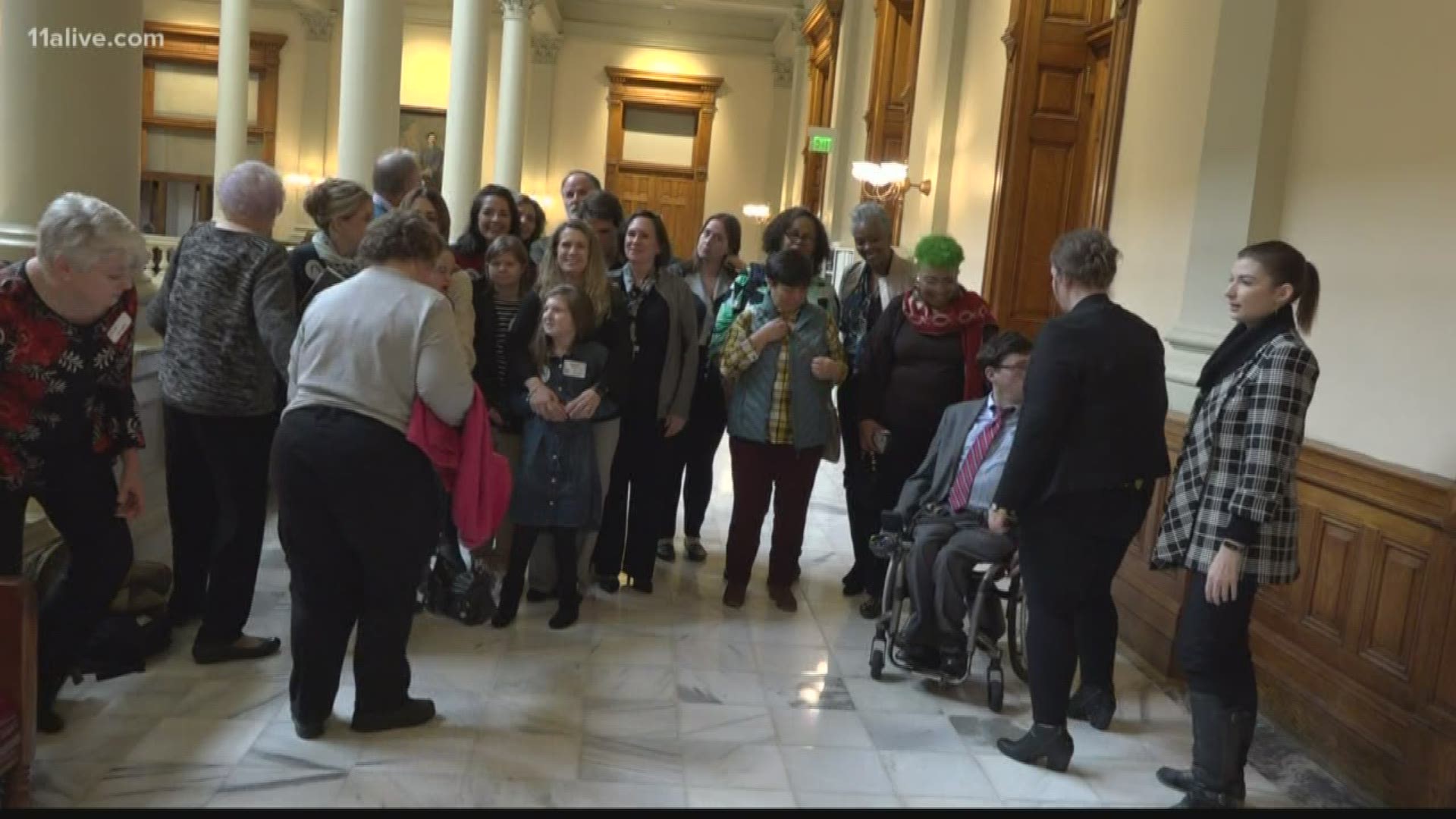 ATLANTA — Hundreds of disability advocates rallied at the Capitol on Wednesday to ask lawmakers to reconsider budget cuts that they say would hurt families.

The current budget does not allocate any new Medicaid waivers for home and community care help for families who say they desperately need it.

11Alive was at the Capitol where self-advocates and families met with lawmakers.

There are nearly 7,000 people waiting to get services from the state and, for 2020, the budget does not allow for any additional waivers. That's why families with nowhere else to turn to say they're stuck.

Her daughter Missy is 47 and has Down Syndrome.

"God really knew what he was doing when he sent her to me," she said. "Because I don't know what I would do without her."

RELATED: Does the new food stamp rule affect you in Georgia?

Now Pat is worried what Missy will do without her.

"It's frustrating and you get used to waiting and waiting and think nothing is going to happen, you just give up," she said.

Pat's never been to the Capitol before - or even to downtown Atlanta - but she had to come on Wednesday so law makes can see how important this is.

She's had Missy on the waiting list to get services for seven years, and she's not alone.

"We are on the waiting list, it's been almost 4 years," said Lisa Muller.

Her daughter cannot be left alone and has aged out of the Gwinnett School System.

"She is a bright personality, she's really social. She lights up a room," Muller said. "The worst thing for her would be to be left sitting at home with nothing to do. She thrives off a sense of purpose."

"We moved here 9 years ago, and have been on the waiting list the whole time," said John and Diane Reynolds.

"We have been waiting 15 years," said Phillip and Lisa Woody.

Their son suffered a traumatic brain injury, and they do everything they can to fund his community engagement.

"There are 7,000 people in desperate need. And these programs can cost up to $30,000 a year," Phillip said. "Imagine sending your child to college every single year for the rest of their life."

According to the Georgia Council for Developmental Disabilities, more than 6,000 people are waiting for services in the state.

People with disabilities get the waivers through Medicaid that allow them to get home or community-based care funded through the state.

That means they can attend day programs, care providers can come into their homes, or they can go to summer camp.

"This is the first time in our organization's history that there are no new waiver slots for home and community-based services," said Legislative Advocacy Director Charlie Miller.

Miller said that leaves families without a lot of choices.

"If we don't have waiver slots, young folks as young as 20 years old are going into nursing homes and are literally stuck there," said Miller.

RELATED: New report: Georgia is the 9th worst state for raising a family

The Reynolds family said they don't know what to do now that their son is 24 and needs round-the-clock care.

"We are a family in crisis. We are people who can take care of Jason when things are ok," one family member said. "But then when he gets over the edge, when he gets frustrated, he injures himself, he can hurt other people."

His parents said the news that no other families will be helped this year is devastating.

"He is my greatest joy and greatest challenge in life," she said.

Families like Jason's are hoping the governor will reconsider and that even a few families can be moved up the waiting list to get help.

"I just don't know what will happen to her," Pat said. "I need to know what's going to happen. Where she's going to go."

Governor’s office says they annualized fiscal slots from 2020. But the Georgia Council on Disabilities says that means they’re funding the back half of last year’s waivers,  and its understanding is that zero no waivers are being offered.

"While there are several thousand individuals listed on the wait list for these waivers, being on the wait list does not mean that they are not receiving other services from either DBHDD or Education. For example, a minor child living at home may be receiving services through the school system even while being on a wait list for a waiver slot. Additionally, DBHDD prioritizes waivers based on individual need, so those with the highest level of need will go to the top of the wait list as determined by DBHDD to receive needed slots as they become available."