Republican candidate for governor Brian Kemp has a nominal 2-point advantage but African-American turnout could easily propel Democratic candidate Stacey Abrams to the Statehouse, according to the poll. 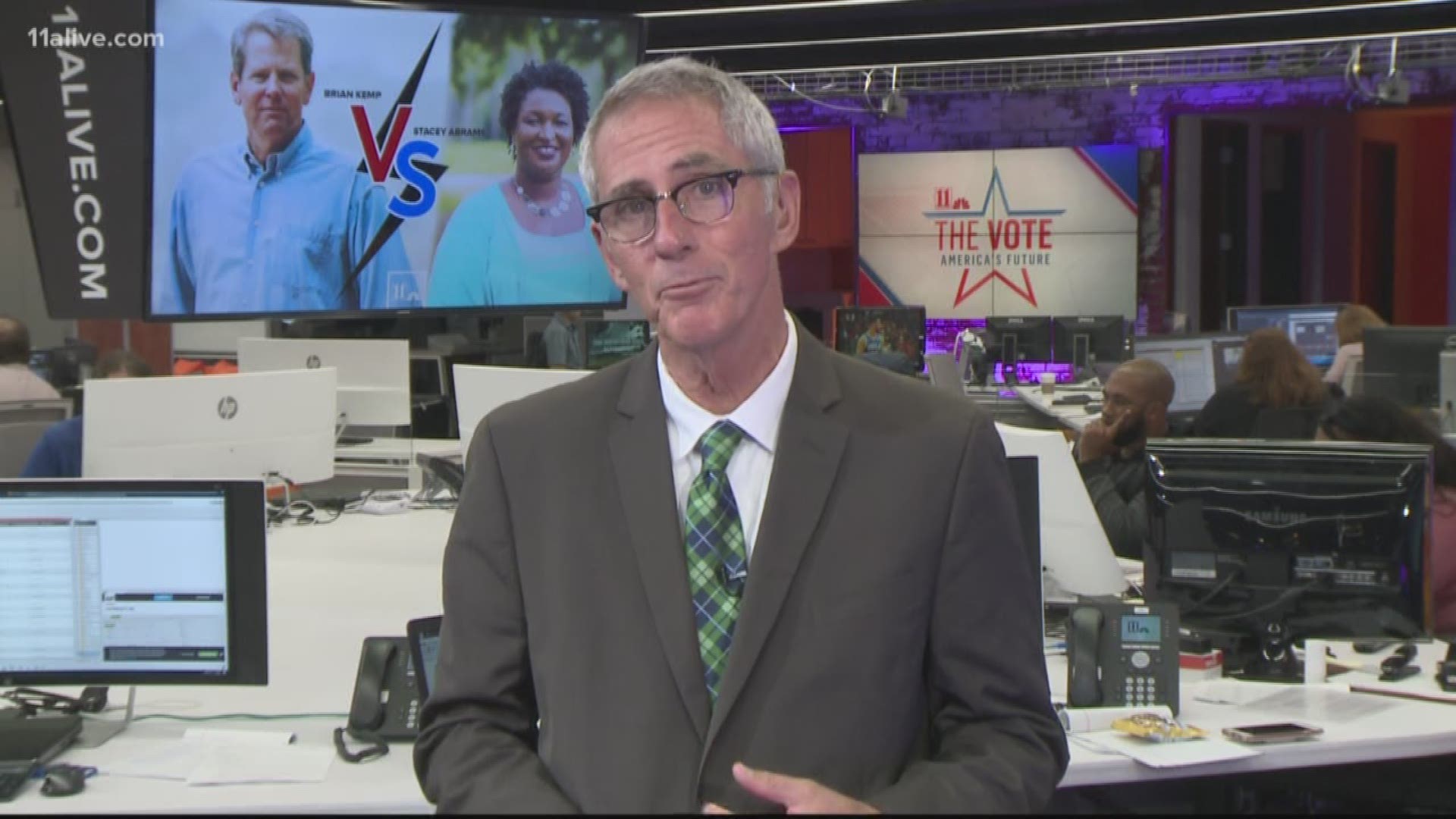 With 4 weeks until the midterm elections in Georgia, a new 11Alive poll shows Georgia's gubernatorial race could go either way and every vote is critical.

Republican nominee Brian Kemp has a nominal 2-point advantage over Democrat Stacey Abrams, but African-American turnout could easily propel her into the Statehouse.

The poll, released Tuesday, shows 47 percent of those surveyed support Kemp and 45 percent support Abrams, well within error parameters of the survey commissioned by 11Alive. The contest is best characterized as a "jump ball."

SurveyUSA interviewed 1,250 adults from the state of Georgia Oct. 3 through Oct. 8. Of the adults, 1,027 were registered to vote. Of the registered voters, 655 were determined by SurveyUSA to be likely to vote in the Nov. 6 general election. This research was conducted online.

A concern of Abrams -- something that works well for Kemp -- is independent voting. According to the poll, they break 46 percent to 29 percent for the Republicans. Conservatives break 7:1 for Kemp; liberals break 18:1 for Abrams and the all-important moderates break 5:3 for Abrams, possibly offsetting some of the votes Abrams loses among independents.

If the election for Georgia governor were today and you were filling out your ballot right now, who would you vote for?

Younger voters -- often the most reliable -- favor Kemp by 14 points.

When voters statewide are asked whether they will vote for the Republican candidate for the U.S. House of Representatives or the Democratic candidate, 46 percent picked Democrat and 44 percent chose Republican.

If the election for the U.S. House of Representatives in your district were today and you were filling out your ballot right now, who would you vote for?

By 5:1, voters are in favor of medicinal marijuana. Voters say recreational marijuana should be legalized in Georgia 5:3.

Should the use of marijuana for recreational use by adults in Georgia remain against the law? Or, should it be legalized?

Voters are divided on whether or not to arm teachers and other school employees. Forty-six percent are in favor and 41 percent are opposed.

Should local school systems have the option of arming school teachers and other trained school employees?

By nearly 2:1, voters said the city of Atlanta should continue to be responsible for the operation of Hartsfield-Jackson Airport -- not the state of Georgia.

Do you support or oppose Brett Kavanaugh becoming the next Supreme Court Justice?

Is your opinion of President Trump favorable, unfavorable or neutral? Or, do you have no opinion of him?

Georgia plans to replace its election system by 2020, eliminating the touch-screen computers now in use. Should the state use a paper-only balloting system? Or, one that combines both paper ballots with computer interfaces?

Would you support or oppose a "religious freedom" law in Georgia, which backers say would strengthen the ability of people to observe their personal religious beliefs, and critics say would enable discrimination against gay, lesbian and transgender persons?

Should the state of Georgia expand Medicaid under the Affordable Care Act, in order to provide insurance for lower-income uninsured Georgians?

Should Special Counsel Robert Mueller be allowed to complete his investigation? Or, should the investigation be stopped?