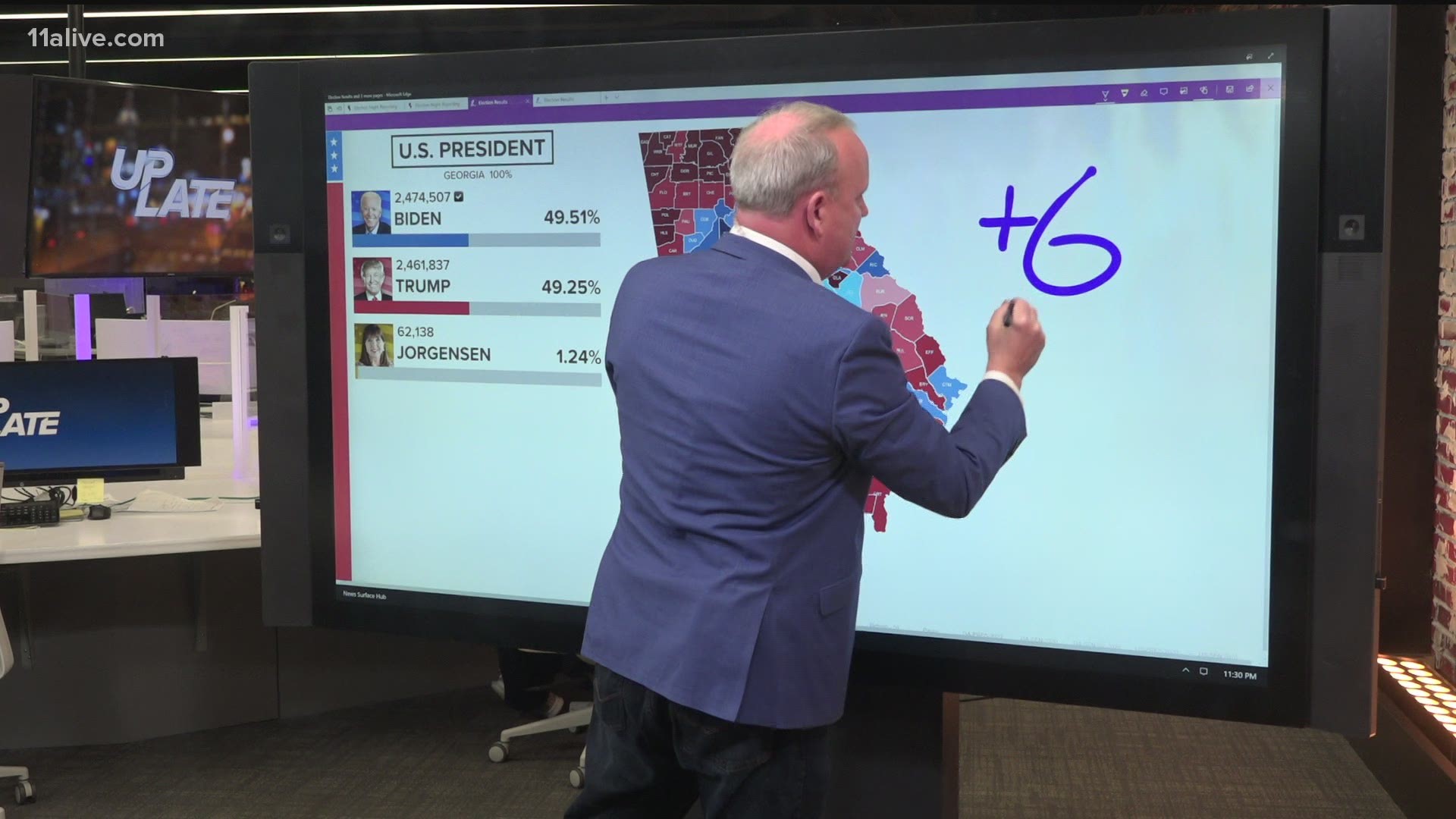 ATLANTA — Georgia counties faced a deadline of midnight to complete their recounts and submit their results to the state, which would bring to an end the official election process here and leave any ongoing matters to the courts.

The official recount has been relegated to something of a side act, though, amid rising tensions between President Donald Trump, his most ardent supporters and state officials who reject his claims of fraud in Georgia.

"It's all gone too far," Sterling said.

It is not likely to abate. Two main lawsuits filed by the president's legal advocates - including Sidney Powell's "Kraken" suit - continue to progress in the courts, and Trump's top allies in Georgia, such as Rep. Doug Collins, continue to agitate for a form of audit on the signatures of absentee ballots.

Wednesday, Powell and another prominent legal ally of the president's in Georgia, Lin Wood, plan to hold a press conference in Alpharetta, which promises more of the political theater still consuming Georgia a month removed from Election Day.

There is no indication at this point the official recount will flip results, and the extraordinary measures the president's legal allies seek from judges - essentially, awarding Georgia to Trump in some manner - so far do not appear as if they are on course to be granted.

11:59 p.m. | The deadline has now come for states to finish their recounts. 11Alive will provide an update Thursday morning on the state's results.

11: 30 p.m. | 14 counties remain in reporting their recount results. Here is where the state stands.

10:15 p.m. | 15 counties remain to report their election recount results. Watch the update below.

9:10 p.m. | The deadline for counties to finish the recount is approaching. Officials don't expect there to be a change in the outcome of the election.  Watch the video below for an update.

6 p.m. | Results from the recount are starting to come on the Secretary of State's website. The larger counties are still finishing their recounts.

We're getting live results from Georgia's presidential recount. But beware, smaller counties finished first, so the numbers are skewing red/Trump just as they did on election night. The larger counties are still finishing their recounts.https://t.co/T4WRXNi1gf

The cards will then be transported to Elections HQ for upload to state's website. Cobb's Elections Board will then meet at 4 p.m. Thursday to recertify the results of the recount.

4:30 p.m. | In addition to everything else going on in Georgia, we could be losing our mayor here in Atlanta to a cabinet job. If you're curious what happens in that event, we've reported on it before: Who becomes mayor in Atlanta if Keisha Lance Bottoms takes a cabinet job?

The SBA administrator will be elevated to a Cabinet position in a Biden administration, @carolelee and I are told.

3:55 p.m. | Sterling also addressed the rally Lin Wood and Sidney Powell held in Alpharetta, in which both lawyers effectively told people they shouldn't vote because they don't trust the Dominion machines.

"We encourage all voters to vote in election... go out exercise your right to vote," Sterling said.

3:50 p.m. | Gabriel Sterling in the Secretary of State's Office says there are 132 counties that have completed their recount work, with 27 to go.

He says they haven't yet launched the results reporting site yet because they wanted to explain first that with the smaller counties being done already, it's going to show President Trump with a lead. He didn't want people to misunderstand when that lead is erased with the larger counties yet to report.

3:27 p.m. | Here are the details for President Trump's visit on Saturday:

Trump, Perdue & Loeffler announce 'Victory Rally' details for Saturday's presidential visit to Georgia. It's scheduled for 7pm at the Valdosta Airport. No mention of @GovKemp pic.twitter.com/DSy5q8D7ay

3:20 p.m. | The Secretary of State's Office will be providing another update on the recount in 10 minutes.

3:15 p.m. | One man brought on stage asked Wood and Powell why, if Dominion machines changed votes from Trump to Biden, why the hand count audit matched the original count in Georgia.

Powell's answer was an accusation that it was not done properly and that they've since shredded ballots and evidence of fraud. There's been no serious suggestion that the hand count was manipulated or that ballots were shredded anywhere in Georgia.

2:55 p.m. | Lin Wood now says he disagrees with Rep. Jones, and discourages people from voting for Sens. Loeffler and Perdue if they do not vocally support a demand for a special session of the state legislature (which Wood, Powell and their allies want for the legislature to appoint Electoral College electors who will vote for President Trump.)

"We're not gonna go vote on January 5th on another machine made by China. You're not gonna fool Georgians again."

"Why would you go back and vote in another rigged election? For God's sake fix it. You gotta fix it before we'll do it again."

2:50 p.m. | After Powell seemed to discourage people from voting, Rep. Jones is now encouraging them to in fact vote for Sens. Kelly Loeffler and David Perdue in the runoffs.

2:45 p.m. | Vernon Jones, a Democratic state representative who has staked out a high profile by being vocally pro-Trump, is now speaking.

2:40 p.m. | Powell encourages people against voting in any further elections (presumably including the Jan. 5 Senate runoffs) conducted on Dominion machines.

"I think I would encourage all Georgians to make it known that you will not vote at all until your vote is secure."

2:30 p.m. | Lin Wood, in his opening statement at the rally, hinted at another lawsuit that may be filed in Georgia, and called out the state's Republican leadership.

In a surreal scene, Wood led the Alpharetta crowd in a chant of "Lock Him Up," referring to Gov. Brian Kemp.

2:00 p.m. | That press conference with Sidney Powell and Lin Wood about the "Kraken" suit is beginning in Alpharetta. It currently has about 55,000 people watching on one YouTube broadcast.

11:40 a.m. | The president is tweeting about Georgia again, though this time only to tout his coming visit on Saturday:

Will be going to Georgia for a big Trump Rally in support of our two great Republican Senators, David and Kelly. They are fantastic people who love their Country and love their State. We must work hard and be sure they win. #USA

11:25 a.m. | 11Alive's Andy Pierrotti is on the Senate campaign trail with Jon Ossoff. Follow him on Twitter for updates at a Decatur event:

10:10 a.m. | In that press conference, Sec. Raffensperger also criticized third-party groups that are working to register voters for what he characterized as underhanded tactics. He pointed to a mailer sent to his son, who died two years ago.

Georgia’s Secretary of State says he got a notice at home from an outside group trying to register his dead son to vote in the Jan. 5 US Senate runoffs. @GaSecofState says this shows groups are not using state’s voter lists because his dead son is not on the voter rolls.

10:00 a.m. | Gabriel Sterling, speaking again after his repudiation of President Trump made national news yesterday, addressed a few questions about the specifics of the recount and a supposed voter purge, then said the president and his lawyers are "exploiting a lack of understanding about these situations" with the election in Georgia.

9:52 a.m. | After recount is complete, expectation is election will be recertified on Friday.

Georgia Secretary of State says the election will be recertified Friday based on tonight’s final recount numbers. Governor @BrianKempGA will likely have to recertify as well, according to @GabrielSterling

9:50 a.m. | The website where the state will post recount results is set to go live at 2 p.m. this afternoon.

9:45 a.m. | Raffensperger says he wants to "extend grace to those who seemingly have hate in their heart."

9:45 a.m. | Sec. Raffensperger says about 110 counties have finished their recounts, and they anticipate all 159 will meet the midnight deadline. Says they have seen "no substantial changes" so far.

9:40 a.m. | Secretary of State Brad Raffensperger says he knew what Gabriel Sterling was going to say yesterday and that he fully supported him.

9:15 a.m. | Gov. Brian Kemp, meanwhile, is set to attend the tree lighting at the State Capitol this afternoon at 1 p.m. before hosting a hospital roundtable discussion at 2 p.m. It's unclear if he will make remarks at any point addressing the political situation in Georgia.

He has generally been quiet, issuing a statement earlier this week saying that, "Georgia law prohibits the Governor from interfering in elections."

Marty, the girls, and I are excited to participate in the lighting of the State Capitol Christmas Tree today with @ClarkHoward and music by the @ugaaccidentals. Please join us by tuning into @mygpb online today at 1pm. https://t.co/Tv3VpXLsP9 pic.twitter.com/UmBiEjlgi8

9:10 a.m. | We're expecting word from the Secretary of State's Office in a press conference in about 20 minutes.

8:10 a.m. | Some actual election results this morning: Kwanza Hall is the projected winner in the 5th District special election runoff. He will fill the late Rep. John Lewis' seat for about a month, before the winner of general election race - Nikema Williams - fills it in full at the start of the next congressional term.