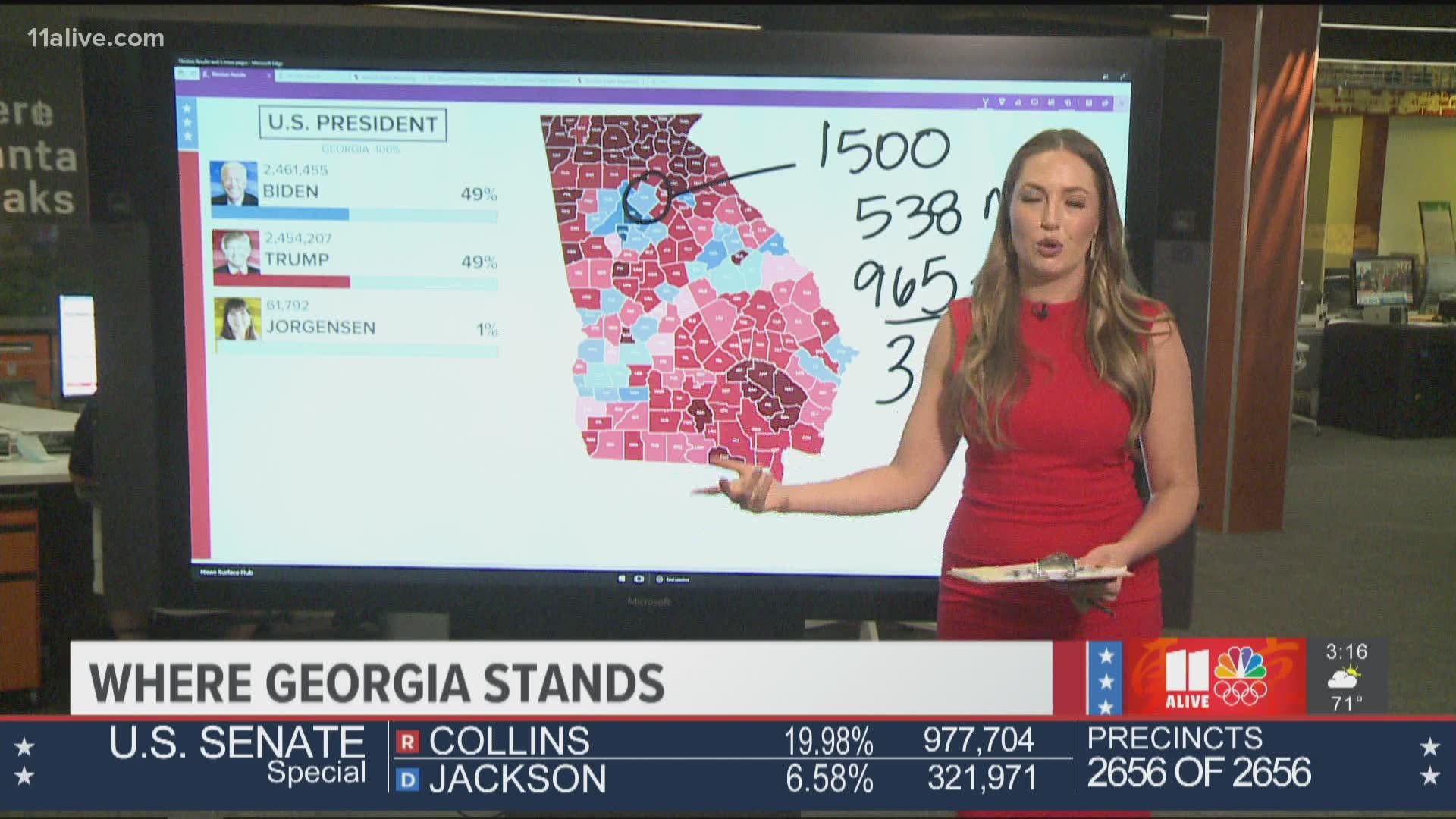 Democrat Joe Biden has surpassed the 270 electoral vote threshold to take the White House and become the 46th president of the United States.

Biden also carried Arizona, Wisconsin and Michigan on his path to the presidency, flipping states that President Donald Trump won in 2016. The AP also called Nevada for Biden on Saturday.

Pennsylvania was a must-win state for Trump.

President-elect Joe Biden says it’s time for America to “unite” and to “heal.”

Biden said in a statement Saturday, “With the campaign over, it’s time to put the anger and the harsh rhetoric behind us and come together as a nation.”
“We are the United States of America,” he wrote. “And there’s nothing we can’t do, if we do it together.”

Biden made no mention of his opponent, President Donald Trump, who has not conceded the race. The president-elect is expected to speak at 8 p.m. ET Saturday.

America, I’m honored that you have chosen me to lead our great country.

The work ahead of us will be hard, but I promise you this: I will be a President for all Americans — whether you voted for me or not.

I will keep the faith that you have placed in me. pic.twitter.com/moA9qhmjn8

The 77-year-old Biden was born in Scranton, Pennsylvania, and sought to contrast his working-class roots with the affluent Trump’s by casting the race as “Scranton versus Park Avenue.”

Biden’s victory came after more than three days of uncertainty as election officials sorted through a surge of mail-in votes that delayed the processing of some ballots.

Trump is the first incumbent president to lose reelection since Republican George H.W. Bush in 1992.

Along with the Associated Press, ABC, CBS, NBC, CNN and FOX News have called the presidential race.

RELATED: Presidential Election 2020: Live results from across the US

President Trump has been trying to undermine confidence in the election. As his pathway to reelection appeared to shrink, Trump advanced unsupported accusations of widespread voter fraud.

“We all know why Joe Biden is rushing to falsely pose as the winner, and why his media allies are trying so hard to help him: they don’t want the truth to be exposed," Trump said in a statement which repeated the unproven accusations.

What could happen next?

Since Election Day, Trump’s campaign has been engaging in a flurry of legal activity to try to improve the Republican president’s chances, saying it would seek a recount in Wisconsin and filing lawsuits in Pennsylvania, Michigan and Georgia. Election officials in Georgia said there would be an automatic recount there because the race is so close.

Trump's campaign has been lodging legal challenges in several states, though he faces long odds. He would have to win multiple suits in multiple states, since he needs multiple states to reach 270 electoral votes. Trump has also claimed he’d take his case to the U.S. Supreme Court, but it’s unclear whether he has a path to do so.

Some of the Trump team's lawsuits have only demanded better access for campaign observers to locations where ballots are being processed and counted. A judge in Georgia dismissed the campaign’s suit there less than 12 hours after it was filed. And a Michigan judge dismissed a lawsuit over whether enough GOP challengers had access to handling of absentee ballots.

When are results official?

Over the next several weeks, each state will certify its results for the presidential election. Once that’s finalized, the Electoral College will meet on Dec. 14.

Each political party chooses their electors before the election. Whichever candidate won a state, their party's electors will represent that state in the Electoral College.

If there are any election disputes related to the presidential race, states must resolve these by Dec. 8. In 2020, those disputes may be numerous due to expected court challenges on both sides.

There have been rare cases when some of these electors have gone rogue and decided to ignore their state's results and vote for the other candidate. The Supreme Court ruled in June that states have the right to punish or remove these so-called "faithless electors" if they don't follow the will of their state's voters.

A simple majority of electoral votes are needed to win: 270. What happens in the popular vote doesn't matter.

There are no laws requiring a candidate to publicly concede an election. But it's been a tradition for every U.S. presidential election since 1896. Two days after that election, William Jennings Bryan sent a short telegram to his opponent, William McKinley.

While there's no mandate for losing candidates to make a concession speech, the 20th Amendment clearly states that the president's term ends at noon on Jan. 20.

So assuming the Electoral College votes as projected, President Donald Trump’s term would end at noon on Jan. 20, 2021.

President Trump has made several false claims about the integrity of the election. These claims are largely focused on battleground states in which he has fallen behind Joe Biden. While Donald Trump saw large turnout from Republican voters on Election Day, many Democrats chose to vote by mail. In fact, Trump himself encouraged his supporters not to vote by mail.

In some states, including Pennsylvania and Michigan, where mail-in ballots were counted after Election Day ballots, Trump was initially leading in votes but was then surpassed by Biden as the mail-ins were counted. This was expected and is not evidence of widespread voter fraud or mishandling of vote counting. Counting votes after Election Day is normal.

This claim is FALSE on multiple levels.

At this point, no state has reported processing any “illegal” or “late” votes. His talk about “votes that came in late,” is also misleading. At this point, there are no states reporting that they’re processing “late” ballots.

The National Conference of State Legislatures has a detailed breakdown of when states stopped accepting ballots via mail. In all states, as long as a ballot was received by Election Day, it is perfectly legal no matter how long it takes the state to process it. Many states also allowed ballots that were received after Election Day to be counted as long as they were postmarked by Nov. 3.

According to USA.gov, there are multiple types of voter fraud such as when someone “illegally casts a vote in the name of a dead person or someone who’s moved."

Voter fraud is considered a federal election crime. Trump’s campaign did not provide evidence to prove what he called “illegal votes” and his team hasn’t provided any evidence of that.

Trump: “We were winning in all the key locations by a lot actually. And then our numbers started miraculously getting whittled away in secret.”

This claim is FALSE.

Initial results in many states did show President Trump leading in the vote count, but the state is not won until all the votes are counted.

As the VERIFY team investigated Wednesday, there were no surprise or "miraculous" changes to the voting results. The overnight changes in vote totals came as more ballots were counted in all of the states.

Election officials in many states warned for weeks that results would likely not be known on Election Day and that the results from processing mail-in ballots would take longer than ballots cast on Election Day.

Trump: “And as you know, I've claimed certain states and he's claiming states and we can both claim the states."

This claim is FALSE.

A candidate “claiming” a state carries no actual weight or power. Nonetheless, President Trump publicly tweeted that he “claimed, for Electoral Vote purposes,” the States of Pennsylvania, Georgia, North Carolina and Michigan. At the time of the tweet none of those states had been called for either candidate. Michigan was called by the Associated Press and other outlets for Joe Biden shortly after the tweet.

The VERIFY team looked through transcripts of all of Joe Biden’s recent speeches and any recent social media posts by the candidate. Biden has not claimed any states.

RELATED: VERIFY: How do states know a mail-in ballot was sent in time?

RELATED: VERIFY: No, this isn't video of a woman fabricating votes at a polling location

RELATED: VERIFY: What are the current election laws in Pennsylvania?