Mayoral candidate Keisha Lance-Bottoms is calling on Georgia's Attorney General to investigate what she is calling a "fake" robocall on the final weekend before Atlanta's mayoral election. 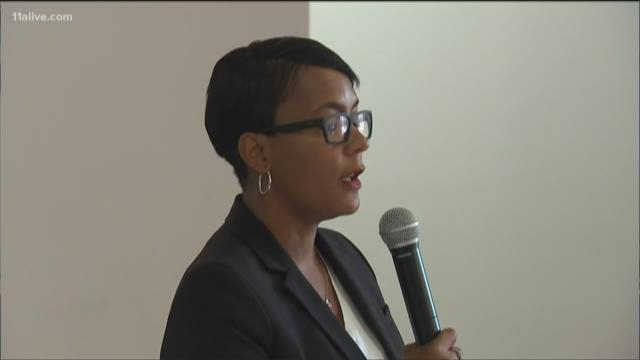 Just days before Atlanta selects a new mayor, there's a new twist in the race to lead the city.

Mayoral candidate Keisha Lance Bottoms is calling on the state's Attorney General to investigate what she calls a fake robocall with racist overtones being sent to voters. The call ends by saying it's been paid for by "Citizens For Keisha" -- a group that does not exist.

The Lance Bottoms Campaign telephoned the 11Alive Newsroom Saturday morning. Her spokeswoman Phillana Willams said the calls were made into predominantly white voting areas of the city, including East Atlanta and Buckhead.

Inflammatory & racist Robo calls going out under my name. This is a DIRTY campaign trick and our campaign has NOTHING to do with this. pic.twitter.com/LReB8BdOOJ

She says one voter indicated the call was so disturbing, she was, "shaking in her boots."

The Lance Bottoms Campaign released a statement Saturday morning: "As the new frontrunner, we knew that there would be dirty tricks, but this is dealing from the bottom of the barrel. I find the robocall personally disgusting and such tactics have no place in this election. The calls are also illegal. I hope the people are revealed and they suffer the legal consequences they deserve."

Candidate Ceasar Mitchell quickly responded to Norwood's statement Saturday morning, saying, "Ms. Bottoms is simply verifying what we know to be true: that I am the strongest Democrat in this race and poised for a run-off against Mary Norwood. It is sad and unfortunate that she is playing the race card to drum up support. Unlike Ms. Bottoms, I will set a new tone for our city and be a mayor who serves in the best interest of ALL Atlantans."

"This is ridiculous," she said. "The robocall was sent to white voters and is the ugliest of dirty tricks designed to hurt Keisha Lance Bottoms' campaign. In what scenario is this a benefit to our campaign? That's why she called for the attorney general to investigate the robocall."

Polls in the city of Atlanta and across much of Georgia will be open on Tuesday from 7 a.m. to 7 p.m. 11Alive and 11Alive.com will have continual election coverage on-air and online Tuesday as Georgia goes to the polls.