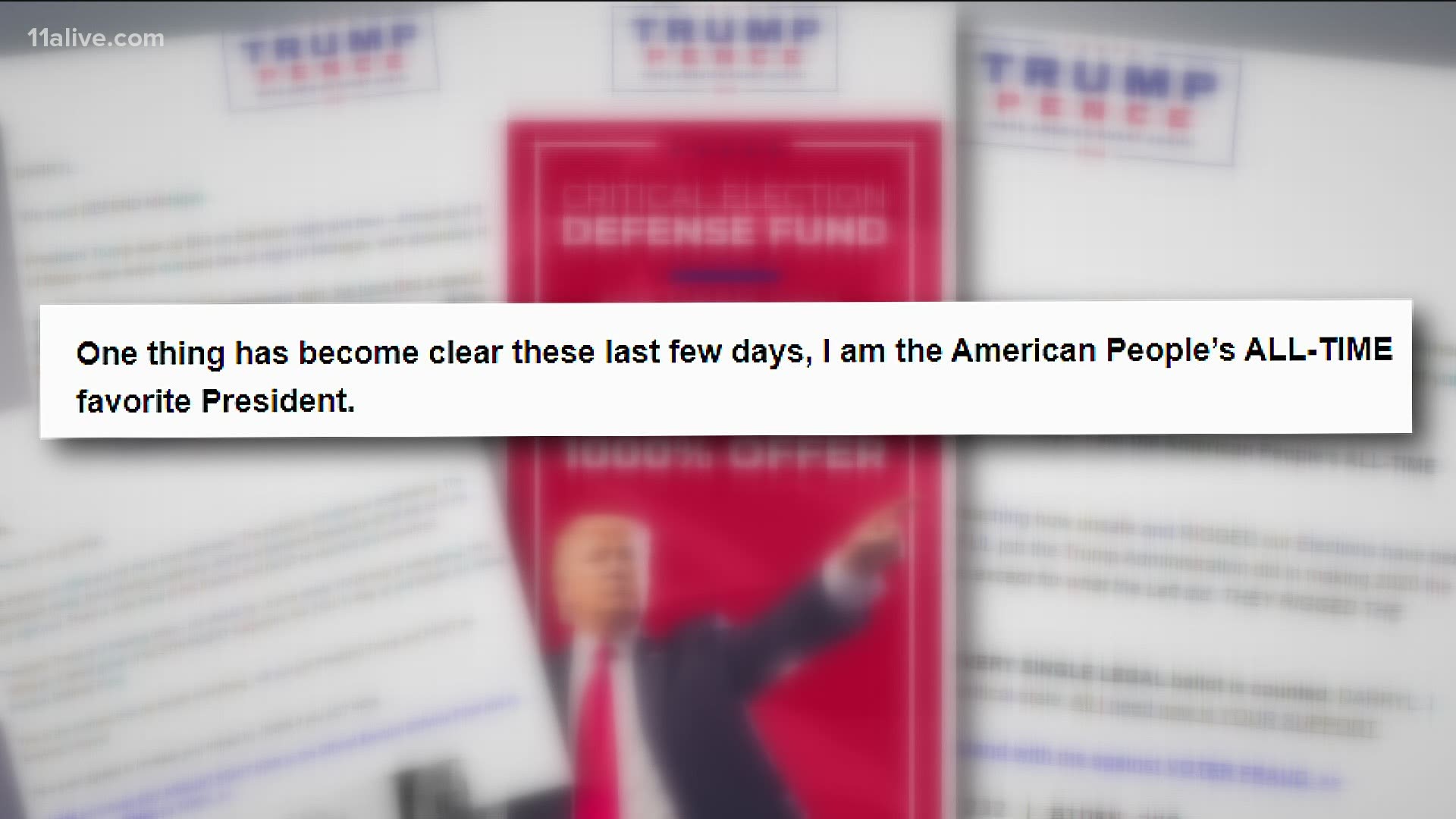 ATLANTA — Some prominent Georgia Republicans are urging members of the party to pull back from challenging the presidential vote in Georgia. One describes the challenge as “delusional” and says it’s distracting Republicans from winning the two US Senate runoffs.

In-person early voting for the US Senate runoffs starts in 27 days.  And it’s possible many Georgia Republicans  -- despite an absence of evidence -- will still be talking about what they view as a stolen presidential election.

Many of them have vowed to fight the results of the presidential election until President Trump is declared the winner. They’re egged on by email after email from Trump’s lingering presidential campaign – declaring that Trump “is the American People’s ALL-TIME favorite president.”

"It is hard to ignore," said former state Rep. Buzz Brockway. He is among the Republicans urging Trump’s backers to shift their focus to the US Senate runoffs – featuring Republicans Kelly Loeffler and David Perdue against Democrats Raphael Warnock and Jon Ossoff.

"The Republican base at large is not focused on that right now," Brockway said. "And that, at this moment in time, certainly puts the Republican candidates, Loeffler and Perdue, at a disadvantage."

Brockway says in the meantime, Democrats are focused on winning the Senate runoff.

Former state Representative Allen Peake – the Republican who wrote Georgia’s groundbreaking medical marijuana laws -- wrote on Twitter “on behalf of all the rest of us (Republicans)… quit being delusional about the election & get focused on winning the Senate.”

The Macon lawmaker left the House in 2018.  He declined further comment when reached by 11Alive News.

The irony is that Senators Perdue and Loeffler – on whose behalf the critics have arisen – themselves are still firmly in Trump’s corner, challenging the election and calling for the resignation of Republican Secretary of State Brad Raffensperger. They accepted Trump’s endorsements Monday.

The president’s recount manager in Georgia Congressman Doug Collins told 11Alive News Tuesday in a statement:  “The 2,600 ballots just discovered in Floyd County (Monday) — nearly two weeks after the election — demonstrates just how important it is to conduct a full hand recount. With the fate of the Senate hinging on the January run-offs, I can’t think of a more critical time to make sure we get this right.”

The Electoral College is due to convene and presumably decide the presidential race on December 14th. That’s the same day early voting starts in Georgia in the Senate runoff.