A federal court judge heard arguments on the lawsuit Thursday and said he will make a ruling in the coming days. 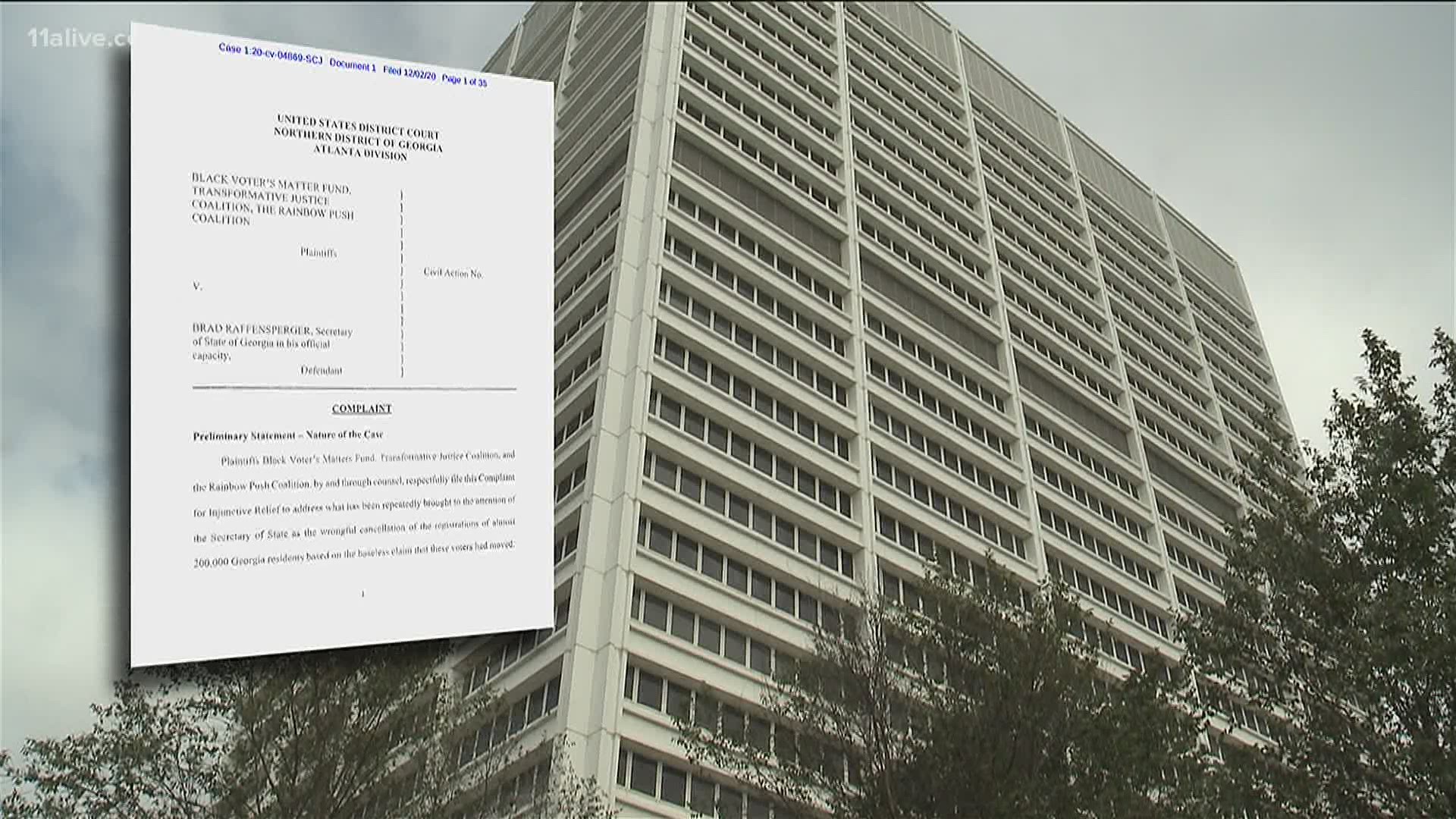 ATLANTA — Voter advocacy groups filed a federal suit seeking to restore the voter registration of nearly 200,000 Georgians that they say were illegally removed.

A hearing for the lawsuit was held Thursday morning before Federal District Judge Steven Jones.

In the lawsuit, the plaintiffs claim that “199,908 Georgians had their registrations cancelled for allegedly moving (out of the state) when, according to experts in the field, in all likelihood they had not.”

The plaintiffs in the suit are the Black Voter’s Matter Fund, Transformative Justice Coalition, and the Rainbow PUSH Coalition, and it was filed in federal district court against Georgia Secretary of State Brad Raffensperger.

The advocacy groups claim the state violated the National Voter Registration Act and are demanding the 199,908 Georgians have their voter registration restored ahead of the January 5 runoff election.

In court Thursday, attorney Tricia Hoffler representing the Black Voter's Matter Fund said "if one person, if two people don't have the ability to vote and were purged improperly that is one or two people too many and the secretary of state made the mistake."

During a press conference, Thursday 11Alive asked Gabriel Sterling, the voting implementation manager with the Georgia Secretary of State's office, about the hearing.

"This is a fundamental misunderstanding of how list maintenance works," Sterling replied. "We properly followed the law based on the federal National Voter Registration Act that we have to do list maintenance."

The secretary of state's office said the state used precise, rigorous checks to verify voters that should be removed from the rolls in order to follow the NVRA and made multiple attempts to contact each of them.

"They were sent a mailing saying, 'Hey we are going to make you inactive if you don't respond to this," Sterling said. "Then they missed two general elections and didn't have any contact and then we sent another postcard."

Sterling added the state then published the names of voters to be removed before taking the names off the voter rolls.

"Nobody stepped forward to say 'Oh, I shouldn't be on this list' and they could have easily re-registered."

The voter registration deadline for the runoff election was Monday, Dec. 7.

Federal court records show the lawsuit was filed in United States District Court for the Northern District of Georgia on Wednesday, December 2.

Judge Jones told attorneys in court he would issue a ruling in the coming days.