The speech by the Democrat acknowledged that Brian Kemp will be the next governor. 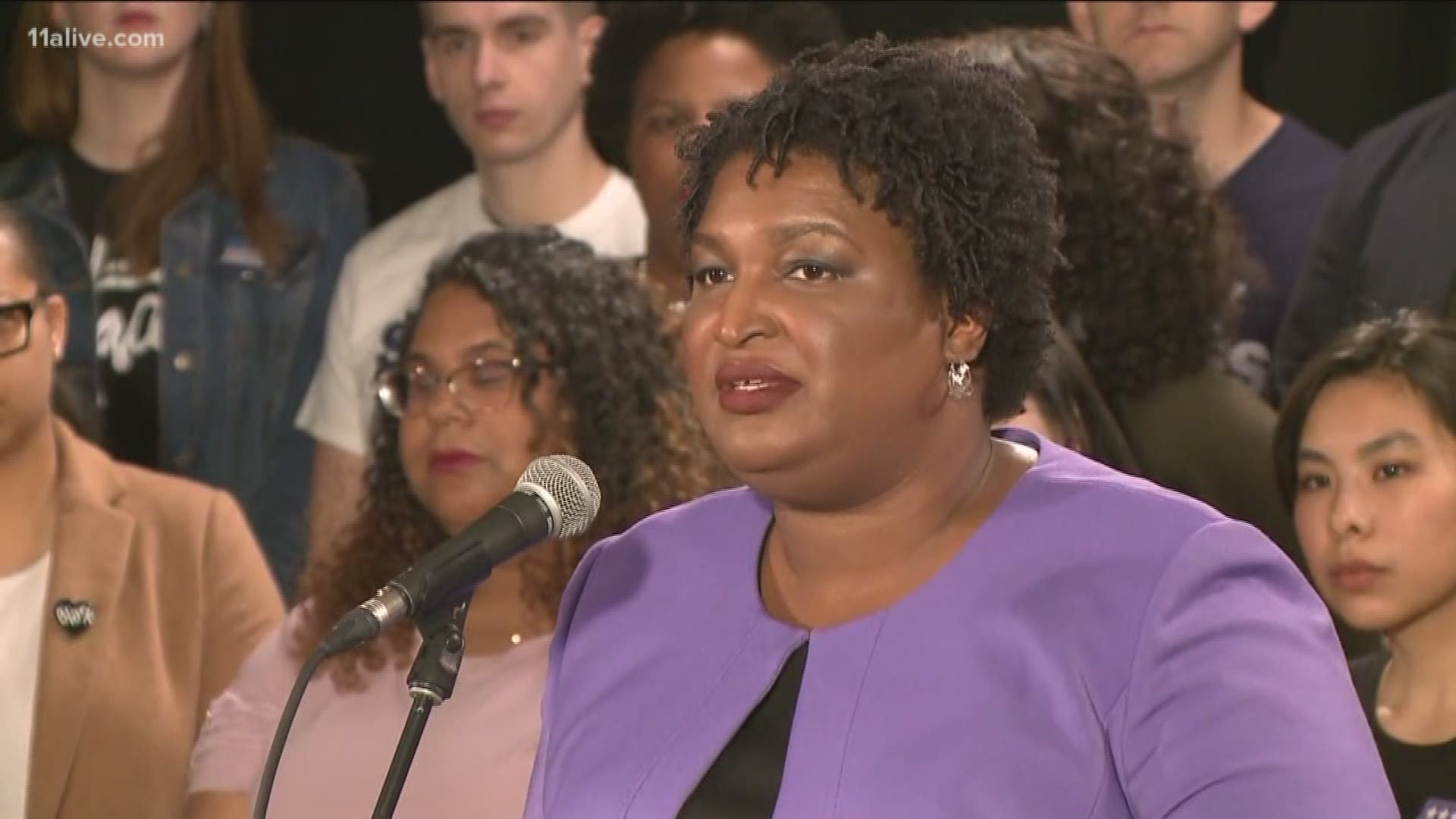 A speech delivered by Stacey Abrams' appeared to end the Democrat's quest to become Georgia's next governor without actually conceding to Republican Brian Kemp.

Below is the full text of Abrams' speech:

On September 18, thousands of Georgians began casting absentee ballots, determined to lift their voices in the democratic process of electing our leaders for the next two years, the next four years. A few weeks later, more than two million Georgians declared their choices, heading to polling places for early votes. Then, on November 6, more than a million folks arrived in precincts around our beloved state – anxious and excited to express their patriotism through the basic, fundamental act of voting.

For these millions of Georgians, the act may have proven tedious and hard, but they had no doubts their votes would be counted. Certainly, there would be long lines and delays. Absolutely, a tired volunteer would mistype a name. And Nature would not be ignored – through rain or tornado warning or chilly weather.

We all understand challenges and complications; however, this year, more than two hundred years into Georgia’s democratic experiment, the state failed its voters. You see, despite a record high population in Georgia, more than a million citizens found their names stripped from the rolls by the Secretary of State, including a 92 year-old civil rights activist who had cast her ballot in the same neighborhood since 1968. Tens of thousands hung in limbo, rejected due to human error and a system of suppression that had already proven its bias. The remedy, they were told, was simply to show up – only they, like thousands of others, found polling places shut down, understaffed, ill-equipped or simply unable to serve its basic function for lack of a power cord.

Students drove hours to hometowns to cast votes because mismanagement prevented absentee ballots from arriving on time. Parents stood in the fitful rain in four-hour lines, watching as less fortunate voters had to abandon democracy in favor of keeping their jobs. Eligible voters were refused ballots because poll workers thought they didn’t have enough paper to go around. Ballots were rejected by the handwriting police. Georgia citizens tried to exercise their constitutional rights and were still denied the ability to elect their leaders. Under the watch of the now former Secretary of State, democracy failed Georgians of every political party, every race, every region. Again.

The incompetence and mismanagement we witnessed in this election had been on display months before—in the Republican state legislative primary of Dan Gasaway. Counties, under the direction of the Secretary of State, issued flawed ballots – and not for the first time and not just there. But this time, the mistakes clearly altered the outcome. Rep. Gasaway, a Republican in a heavily Republican district, had to go to court to force a fair fight. Therefore, on December 4, tucked between run-offs for Secretary of State and the Public Service Commission, for one community, there will be justice in the process. Win or lose, the people in his district will finally have a say.

Many of the same Republicans who cheered on Rep. Gasaway have grumbled about the time we have taken to gain a remedy for fellow Georgians who faced a dizzying array of bad action, misinformation and gut-wrenching hardship.

But we are a mighty nation because we embedded in our national experiment the chance to fix what is broken. To call out what has faltered. To demand fairness wherever it can be found. Which is why on Election Night, I declared that our fight to count every vote is not about me. It is about us. It’s about the democracy we share and our responsibility to preserve our way of life. Our democracy – because voting is a right and not a privilege.

I stand here today as witness to that truth. This election is about all of us – as is the resolution of this moment.

I acknowledge that former Secretary of State Brian Kemp will be certified as the victor in the 2018 gubernatorial election.

But to watch an elected official – who claims to represent the people of this state, baldly pin his hopes for election on the suppression of the people’s democratic right to vote – has been truly appalling.  So, to be clear, this is not a speech of concession.

Concession means to acknowledge an action is right, true or proper. As a woman of conscience and faith, I cannot concede. But my assessment is that the law currently allows no further viable remedy.

Now, I could certainly bring a new case to keep this one contest alive, but I don’t want to hold public office if I need to scheme my way into the post.  Because the title of Governor isn’t nearly as important as our shared title.  Voters.

And this is why we fight on and why I want to say thank you. Thank you for organizing your communities and shattering records – more than 1.9 million voters who stood up for protecting our public schools, continued criminal justice reform, Medicaid expansion and real economic mobility for all of our counties. We won state House races and Senate races, a new seat in Congress and put America on notice that change is not coming – it has arrived. And you made it so.

RELATED: Georgia's Secretary of State race will go to a runoff on Dec. 4

But those who fear change pushed back, and so we waited for the whole truth of this election – good and evil - to come forth. So thank you sharing your stories, for the tens of thousands of calls into our voter protection line. Thank you for volunteering your hours after the polls closed and for the past ten days. For driving to all 159 counties and for hearing the concerns of Georgia citizens, through tears and frustration and disappointment.

Make no mistake, the former Secretary of State was deliberate and intentional in his actions. I know that eight years of systemic disenfranchisement, disinvestment and incompetence had its desired effect on the electoral process in Georgia.

I also know that we live in a nation where four federal judges were necessary to force the counting of more ballots cast, in the face of Brian Kemp’s opposition and disregard to their lawful consideration.

I know that millions of Georgians, of Americans - of goodwill and various partisan beliefs - are enraged by these truths.  In response, you may seek to vent your anger, or worse, turn away from politics because it can be as rigged and rotten as you’ve always believed.

I implore each of you to not give in to that anger or apathy but instead turn to action. Because the antidote to injustice is progress. The cure to this malpractice is a fight for fairness in every election held – in every law passed – in every decision made.

Pundits and hyper-partisans will hear my words as a rejection of the normal order. I’m supposed to say nice things and accept my fate. They will complain that I should not use this moment to recap what was done wrong or to demand a remedy. As a leader, I should be stoic in my outrage and silent in my rebuke.

But stoicism is a luxury and silence is a weapon for those who would quiet the voices of the people, and I will not concede because the erosion of our democracy is not right.

Regardless of party, we want what is best for our children, for our families, for our neighborhoods. We may not share the same faith, but we are knitted together by our belief in our potential for more. I will work in these coming weeks to elect John Barrow as our next Secretary of State – a man of principle and goodwill who will administer his responsibilities for the people – not his party. I will work to elect Lindy Miller as our next Public Service Commissioner, where she will speak for those who have been ignored for too long.

And I will pray for the success of Brian Kemp, that he will indeed be a leader for all Georgians. That he will pledge to fight for the rights of those who disagree with him – and keep his promises. That he will refuse the call of those who see how close this election was. Because we know that some propose to make voting even harder. They see voter engagement in communities of color and cry fraud or lie about the cost of democracy to justify closing more polling places. I pray he will reject this vicious and tired response - in favor of preserving what is left of our state’s reputation for equality and civil rights.

But I will not leave it to prayers alone. As I have for more than twenty years, I will stand with my fellow Georgians in pursuit of fairness. I did so as a college student speaking in the shadow of Lincoln and King at the 30th anniversary of the March on Washington. I did so as the Democratic Leader of the House and as the Democratic nominee for Governor of Georgia. And I will do so as a private citizen, ready to continue to defend those whose choices were denied their full expression.

Today, I announce the launch of Fair Fight Georgia, an operation that will pursue accountability in Georgia’s elections and integrity in the process of maintaining our voting rolls. In the coming days, we will be filing a major federal lawsuit against the state of Georgia for the gross mismanagement of this election and to protect future elections from unconstitutional actions.

We will channel the work of the past several weeks into a strong legal demand for reform of our elections system in Georgia. And I will not waver in my commitment to work across party lines and across divisions to find a common purpose in protecting our democracy. For a state that elects Democrats and Republicans and Independents. That elects leaders who will not tolerate an erosion of our values.

Fair Fight Georgia. Because these votes are our voices. We are each entitled to our choices. And we have always, Georgia, been at the forefront of speaking truth to whatever power may lay claim to leadership – if only for the moment. We will win because we are Georgia.

And we will get it done.

The latest numbers in the race showed Kemp with nearly 50.3 percent of the vote. A candidate in Georgia must have more than 50 percent to be declared winner.