It will be the third count the state has undertaken in the 2020 presidential election. 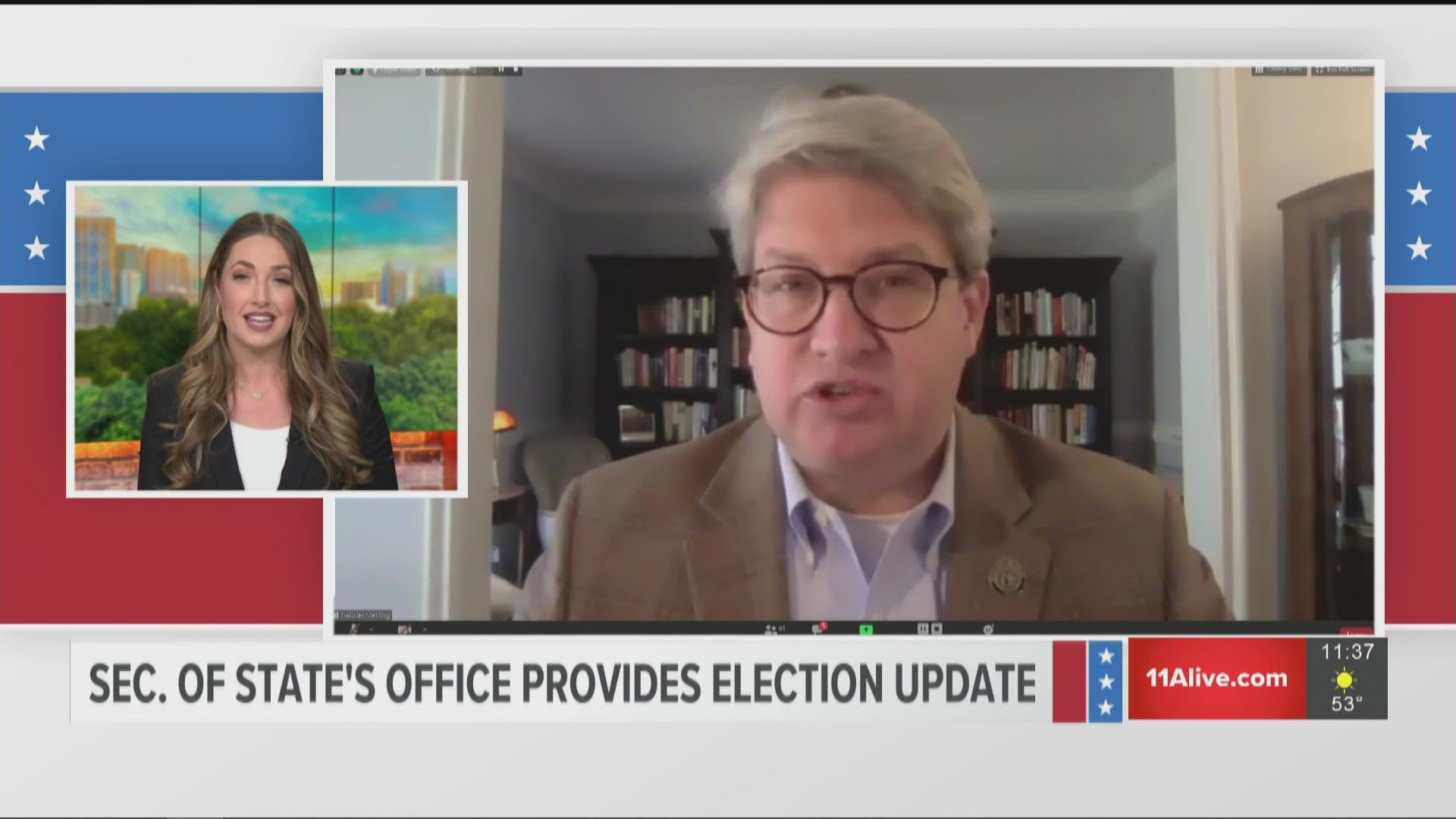 ATLANTA — Below is an archive of our Nov. 23 blog

Now nearly three weeks on from Election Day, Georgia will begin to count its votes for a third time this week.

4 p.m. | Gabriel Sterling, on Monday afternoon, provided a timeline for the Georgia recount. He said the recount can't start any earlier than 9 a.m. on Tuesday and must end by Dec. 2 at midnight. Sterling said they had been speaking with county offices about the upcoming process.

2:40 p.m. | Sen. David Perdue is kicking off a statewide bus tour right now as he battles for re-election against Jon Ossoff. You can watch the event here.

2:05 p.m. | State Farm Arena - which was a wildly popular early voting destination for the Nov. 3 general election - will again be in use for the Jan. 5 runoffs. But it will only be able to do so for a time - the NBA season starts in the middle of the early voting period.

So Mercedes-Benz Stadium is going to step in to help fill the void.

The venues - collectively home to the Atlanta Falcons, Atlanta United and Atlanta Hawks - said Monday their partnership would involve State Farm Arena hosting early voting from Dec. 14-19 and then Mercedes-Benz Stadium hosting it from Dec. 22-30.

1:45 p.m. | A claim that Georgia voters who voted on Nov. 3 are being purged ahead of the Jan. 5 Senate runoffs is spreading like wildfire online - 11Alive's Joe Henke looked into it.

Seeing posts of Georgia voters purged from the voter rolls before the Jan 5th runoffs, after voting on Nov. 3? The Sec. of State's office tells us there has been "no list maintenance." Federal law also wouldn't allow for it. https://t.co/JqHr2BaYrA #11Alive #gapol #Elections

12:10 p.m. | Addressing some of the actual specific allegations of fraud that have come in through to the Secretary of State's Office, Sterling said they've investigated two instances of people trying to vote on behalf of dead relatives.

He noted that falls far short of an indication of widespread irregularities.

12:05 p.m. | Gabriel Sterling has noted a couple of times during this news conference that even if a kind of signature audit were done, because there's no way to tie the signatures on envelopes back to ballots at this point, he could not see what would be done even if you showed some amount of votes were cast with bad signatures.

He also noted that, so far, there is no proof of illegally cast votes.

9:05 a.m. | The State Election Board, which is still wrapping up its meeting and going through public comments, adopted the rule to require earlier absentee ballot processing:

8:50 a.m. | Looks like the recount won't be finished until early next week.

Georgia's Secretary of State says it will take 4 days to complete the machine recount of 5 Million presidential ballots. Some counties can get it done in 2 days, @GaSecofState said, larger counties 4 days. This will take us into next week, assuming they stop for Thanksgiving.

Those voters who voted absentee in the presidential election, but don't fall into the 65+ or disabled category, need to request an absentee ballot again for the Senate runoffs if they wish to vote that way.

8:30 a.m. | Gabriel Sterling in the Secretary of State's Office was on CNN this morning and spoke about the official recount and upcoming runoffs. He said his biggest concern was that "we're running these elections officials in these counties into the ground."

“What we’ve seen historically in recounts, when you’re especially using equipment like this is, the outcomes remain the same,” says Georgia election implementation manager Gabriel Sterling on the Trump campaign’s request for another recount in the state. https://t.co/bauohB42MU pic.twitter.com/FbNVnCj6FP

8:10 a.m. | The election board just said they will not be considering an official rule change on the voter residency matter. They said they met with the state Attorney General's Audience and determined that can be addressed in guidance to counties.

7:55 a.m. | A little more about the meeting that's set to start in five minutes and the three things the Georgia State Election Board is considering ahead of the Senate runoffs:

The official voting day for those is Dec. 1.

6:45 a.m. | At 8 a.m. this morning the Georgia State Election Board will be meeting to consider emergency rules ahead of the Senate runoffs on Jan. 5.

According to an agenda, they will include:

The Secretary of State's Office was mostly quiet over the weekend, so we should probably learn more details today of how the official recount will progress this week.

No press conference has been announced as of yet, though.