Here's what's going on in Peach State politics as we begin another week. 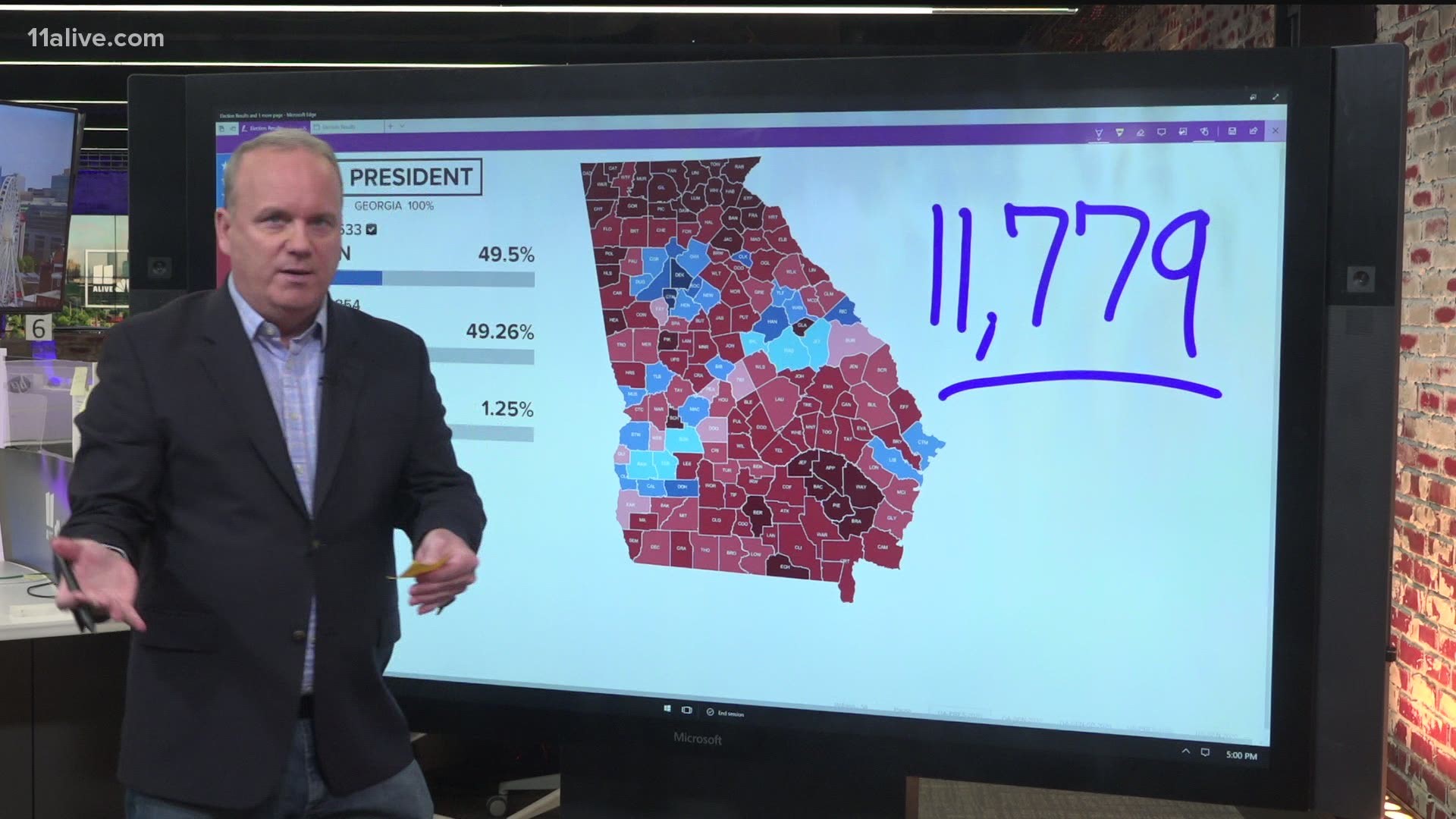 ATLANTA — Below is an archive of our Dec. 7 blog

Another week begins Monday with more political theater on promise in Georgia, a day after a Senate debate between Sen. Kelly Loeffler and Rev. Raphael Warnock and following Gov. Brian Kemp and Lt. Gov. Geoff Duncan rejecting calls for a special legislative session.

This morning, Secretary of State Brad Raffensperger said he would certify Georgia's election results following a recount - the third count of the Peach State's votes.

Coffee County, the last county lagging over the weekend, came online Monday and Joe Biden's winning margin appeared to be finalized at 11,779.

When the Secretary of State certifies the results, it will effectively bring an official close to the 2020 presidential election in Georgia, triggering Gov. Brian Kemp's responsibility to certify the Democrats' slate of Electoral College voters, who will cast those votes for Biden on Dec. 14 when the Electoral College meets.

Further ongoing matters to settle disputes in Georgia lie with the courts, where Sidney Powell's so-called "Kraken" lawsuit was dismissed this morning by a judge for the U.S. District Court of the Northern District of Georgia. She is now likely to appeal to the 11th Circuit Court of Appeals, in Atlanta.

The president himself was here this weekend, at a rally in Valdosta in support of Sens. Loeffler and David Perdue (who declined to participate in a debate last night against Jon Ossoff). Trump used the occasion to continue to push his claim that Georgia's election outcome was swung by widespread fraud, an allegation state and local officials charged with administering the election have repeatedly said is baseless.

The president and his advocates have pressed for a moon-shot special session of the Georgia General Assembly, essentially to have the legislature re-write the state's election laws so that a hand-picked slate of Electoral College voters could be chosen to give the state's votes to Trump.

Gov. Brian Kemp, who continues to bear the brunt of the president's agitation, and Lt Gov. Geoff Duncan have rejected that call.

The Republican Governor of Georgia refuses to do signature verification, which would give us an easy win. What’s wrong with this guy? What is he hiding?

5:00 p.m. | The final margin between President Trump and Joe Biden is 11,779 votes. It comes after a third re-tallying of more than 5 million ballots. It accounts for a 0.24% difference between the two candidates.

Here's how the final counts ended:

After crunching the numbers, it means that the election was 99.965% accurate.

3:15 p.m. | The case referenced in that below entry was dismissed by Judge Jane Barwick of Fulton County Superior Court.

In a potentially relevant development for the suit that is expected to be brought by President Trump and Georgia GOP Chairman David Shafer in Fulton County, Judge Barwick appeared to rule there was no legal basis to sue Gov. Brian Kemp and Sec. of State Brad Raffensperger on the general matter of voter fraud, because by Georgia law defines those who may be defendants in election contest cases as "the election superintendent or superintendents who conducted the contested primary or election."

2:45 p.m. | A hearing is being held in Fulton County court right now on a lower-profile suit against the Georgia election by a private voter in Coweta County in late November. You can watch proceedings below:

1:55 p.m. | Secretary of State Brad Raffensperger has re-certified Georgia's election results, confirming Joe Biden as the winner in the state.

A release went out saying the following, including the secretary's comments on the "Kraken" suit's dismissal earlier:

Secretary of State Brad Raffensperger today recertified the results of the November 3, 2020 presidential election. The recertification came following an audit-triggered hand recount and a formal recount requested by the Trump campaign. Both recounts upheld the original outcome of the race. The certified results of state and federal races can be found on the Secretary of State’s website: sos.ga.gov.

Also this morning, the “Kraken” lawsuit launched by former Trump lawyer Sidney Powell was dismissed by judge of the United States District Court of the Northern District of Georgia Timothy Batten.

“Today is an important day for election integrity in Georgia and across the country,” said Secretary Raffensperger. “The claims in the Kraken lawsuit prove to be as mythological as the creature for which they’re named. Georgians can now move forward knowing that their votes, and only their legal votes, were counted accurately, fairly, and reliably."

1:20 p.m. | The lawsuit referenced in the below entry, it appears, has not actually been officially filed yet. We're told by Fulton County the filing was rejected. They sent this message to news outlets:

12:50 p.m. | 11Alive's Brendan Keefe notes the fairly extraordinary circumstances of the dismissal of the Sidney Powell "Kraken" lawsuit earlier, in which Judge Timothy Batten dismissed it immediately after the hearing.

He expressed strong skepticism to Powell's arguments throughout the hearing, and one thing he returned to a few times was the issue of whether this matter should have been brought to state court. It's not clear if Powell will indeed file a state court suit - another suit was brought in state court, in Fulton County, on Friday on behalf of the president.

Many observers have correctly pointed out that the dismissal came directly from the bench immediately after hearing evidence/oral argument, which is unusual for such a high-profile case. The judge did not retire to issue a written opinion. One may still be forthcoming. https://t.co/HiHJOUoYcD

12:15 p.m. | It appears that, though Gov. Brian Kemp and Lt. Gov. Geoff Duncan have rejected calls for a special session of the legislature, that some state lawmakers are nonetheless attempting to force the matter:

Georgia Patriot Call to Action: today is the day we need you to call your state Senate & House Reps & ask them to sign the petition for a special session. We must have free & fair elections in GA & a this is our only path to ensuring every legal vote is counted. @realDonaldTrump

11:00 a.m. | The Secretary of State's website has updated, seemingly bringing Coffee County online as the last county lagging behind.

It shows a winning margin of 11,784 results for Joe Biden. Once Sec. Raffensperger certifies these updated results from the recount, the state's official election processes will be complete. Any further developments will come out of courtrooms.

10:45 a.m. | The president has again directed a tweet at Gov. Brian Kemp, asking, "What's wrong with this guy? What is he hiding?" The governor has said he supports the envelope signature audit that the president is calling for, but that he cannot unilaterally order such an audit.

The Secretary of State's Office has said they are not sure there is a clear legal mechanism by which to order a signature audit.

Trump continues to lash out at Gov. Brian Kemp. pic.twitter.com/sG6HwWlZ9l

10:00 a.m. | If you wish to listen to the proceedings in the Sidney Powell "Kraken" lawsuit you can do so with the YouTube provided by the U.S. District Court for the Northern District of Georgia below:

9:37 a.m. | Raffensperger says he will re-certify the election results today, ahead of the "safe harbor" Dec. 8 federal-law deadline tomorrow for legal actions against the election to be resolved.

9:25 a.m. | The Secretary of State's Office news conference is set to begin in about five minutes. It will be streaming in the video player above.

The governor and lieutenant governor said it would be unconstitutional to call a special session of the legislature to re-write Georgia election law and select a slate of Electoral College voters who would give the state's votes to President Trump.

I support @GovKemp & @GeoffDuncanGA’s statement. The election of presidential electors has already taken place in the manner directed by Georgia’s legislature at the time set by Congress. There is no applicable legal avenue for replacing the choice of electors after the election. https://t.co/nfZHgp4yka

8:25 a.m. | Among the many other things going on this morning, state Rep. David Clark, who represents District 98 covering parts of north Gwinnett County, will be leading a press conference for a group called Veterans for a Fair and Transparent Election at 11 a.m. outside the Capitol to "discuss the current presidential election and make demands for the path forward," according to a release.

6 a.m. | Good morning, welcome to another week in Georgia's election drama, now stretching out more than a month past Election Day itself.

One important deadline today is that it is the final day to register to vote in the Jan. 5 Senate runoffs.

An update from the Secretary of State's Office is expected at 9:30 a.m., and the federal hearing over the Sidney Powell "Kraken" lawsuit begins at 10 a.m. While there will be widespread interest in those proceedings, news organizations cannot stream out of federal courtrooms.