Here are the latest updates on election news in Georgia from Thursday, Dec. 10. 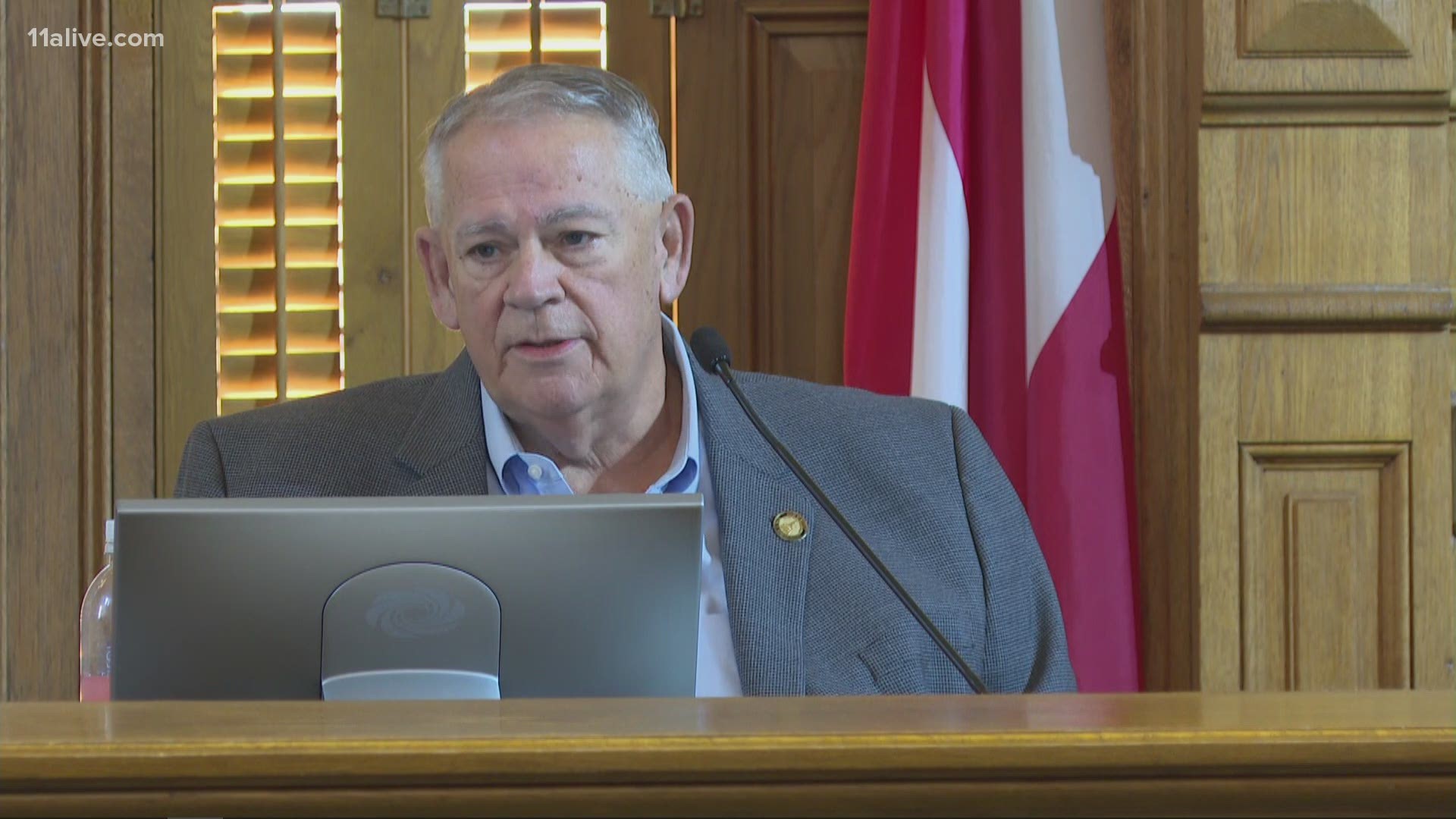 ATLANTA — Vice President Mike Pence will travel to Georgia today for a rally in Augusta, as Joe Biden announced he will be here as well on Tuesday.

The high-profile visits signal how the Georgia Senate runoff races are beginning to take center stage.

Meanwhile, the various legal challenges against Georgia's election results are seemingly taking a backseat for the moment to the Supreme Court lawsuit sought by Texas that President Donald Trump appears to be pinning his hopes on.

Georgia's response to that lawsuit, on why it should not be heard, is due today at 3 p.m.

In addition to the Texas suit, there are three major lawsuits that are still working their way through the system - two of them already having been dealt significant losses.

To this point, these challenges have not posed a serious threat to Joe Biden's victory in the 2020 election. Dozens have been filed around the country, and often - as in the case of the so-called "Kraken" suit - they are being thrown out for simple procedural deficiencies before even being heard on the merits.

5:15 p.m. | The Gwinnett County Solicitor General’s Office has made a promise that it will prosecute "all individuals who threaten or assault election workers, election officials, elected officials, volunteers and contractors."

Any person "who would threaten or endanger the life of local election staff, elected officials and volunteers" would receive a recommendation of up to 12 months in jail and/or a $1,000.00 fine per conviction.

"We are aware that tensions are high in our communities and across the nation, but violence will not be tolerated," the office said in a statement.

4:30 p.m. | In a response to Speaker Ralston's remarks, Deputy Secretary Jordan Fuchs said what the speaker suggested amounted to a "power grab."

3:50 p.m. | The Speaker's press briefing has begun, and in his remarks David Ralston was critical over correspondence from the Secretary of State's Office in which the office reportedly declined participating in a hearing by members of the General Assembly last week on the election.

Ralston said he was "shocked" and "disappointed" that the office did not participate.

Ralston proposed a constitutional amendment during next session to accomplish this. 11Alive has reached out to the Secretary of State's office for a response.

3:30 p.m. | A spokesperson for House Speaker David Ralston confirmed that he will hold a press briefing at the Georgia State Capitol at the Capitol at 3:45 p.m., following the Secretary of State's briefing. The details on what the speaker's presser will be about weren't shared.

Watch the briefing below.

“None are more conscious of the vital limits on judicial authority than are the members of this Court, and none stand more in admiration of the Constitution’s design to leave the selection of the President to the people, through their legislatures, and to the political sphere.” Bush v. Gore, 531 U.S. 98, 111 (2000) (per curiam). That is as it should be, given that the Constitution vests each State with the power to “appoint, in such manner as the Legislature thereof may direct, a number of electors.” U.S. Const. art. II, § 1, cl. 2. And that reality requires that Texas’s motions challenging the results of the presidential election in Georgia be denied.

3:10 p.m. | The reason for the delay with the Secretary of State's press conference, we're told, is that the sign language interpreter hasn't yet arrived.

You can watch the briefing here when it begins:

2:55 p.m. | By the way, Rep. Kwanza Hall - who won the special election earlier this month to fill the late John Lewis' 5th District seat until November general election winner Nikema Williams is sworn in with the new Congress next month - has introduced his first bill as a congressman.

It's called the John Lewis Prompt and Accurate Reporting of Elections Act.

Hall, from a release:

"If passed, this legislation would ensure that all absentee ballots cast in elections for federal office must be counted before Election Day. It would directly address the dynamic our country confronted following the 2020 general election, which found Americans waiting many days to ascertain the victor of the election, namely because certain states had laws which prevented them from counting absentee and mail-in votes before Election Day."

2:45 p.m. | We'll be streaming the press conference with the Secretary of State's Office in the video player above in about 15 minutes. Meanwhile one of the states sued by Texas along with Georgia, Pennsylvania, has submitted its response to the Supreme Court:

Pennsylvania has filed its response to Texas' Supreme Court lawsuit. Texas, it says "added its voice to the cacophony of bogus claims. Texas seeks to invalidate elections in four states for yielding results with which it disagrees." pic.twitter.com/fSCczZVnCX

1:50 p.m. | The Secretary of State's Office has announced it will be conducting a press conference at 3 p.m.

Sterling is a Trump supporter who's been outspoken in his analysis that GA's election was run properly--w/out widespread fraud--& clearly won by Joe Biden. Sterling & other state election officials have lately increased home security to deal w/ these death threats. #gapol (2/3)

Rudy Giuliani to a Georgia House committee on debunked video of Fulton Co. 'suitcases' that were standard ballot containers: "They look like they're passing out dope, not just ballots...your R gov, R lt. gov & your R sec of state persist in continuing in a cover-up of a crime." pic.twitter.com/xQYcR2PU2H

Georgia has until 3 p.m. today to submit its response why the Supreme Court should not hear the case. It's not clear if the state will file that individually or collectively with the other three states.

It remains to be seen, once that happens, if the Supreme Court will grant a hearing or not.

Six states are seeking to join Texas in its Supreme Court lawsuit that seeks to throw out the results of presidential elections in four other states that didn't support President Trump. https://t.co/uFtaGI2vzr pic.twitter.com/FW1mt0mhtb

9:35 a.m. | President Trump has tweeted at Gov. Brian Kemp again, asking, "How does Governor @BrianKempGA allow certification of votes without verifying signatures and despite the recently released tape of ballots being stuffed?"

Under Georgia law, the governor has no authority over certifying the election results.

Rep. Shaw Blackmon, the chairman of the committee, said representatives from the Secretary of State's Office were invited to the hearing, but declined to participate.

9:05 a.m. | The Georgia House Governmental Affairs Committee hearing on the election is now beginning. You can watch it here.

We don't really have any details on the nature of this one yet, but state GOP Chairman David Shafer says another federal lawsuit has been filed against Sec. of State Brad Raffensperger over the election:

It's not clear what outcome that lawsuit would be seeking. Shafer's own lawsuit has asked a state court to nullify the presidential election results and order a new one.

And state Sen. William Ligon says he is filing an amicus brief in support of the Texas lawsuit. It's unclear if other state legislators will join him, as he called for in a tweet.

6:30 a.m. | Another thing to look out for in that Texas lawsuit today - Georgia (along with the three other states involved) has until 3 p.m. to submit a response to the Supreme Court, on why the case should not be heard.

Meanwhile, there are a few noteworthy things going on today: