Where results stand as counting continues after Election Day in Georgia

Voting itself went smoothly on Election Day, but the count has run into some road bumps. 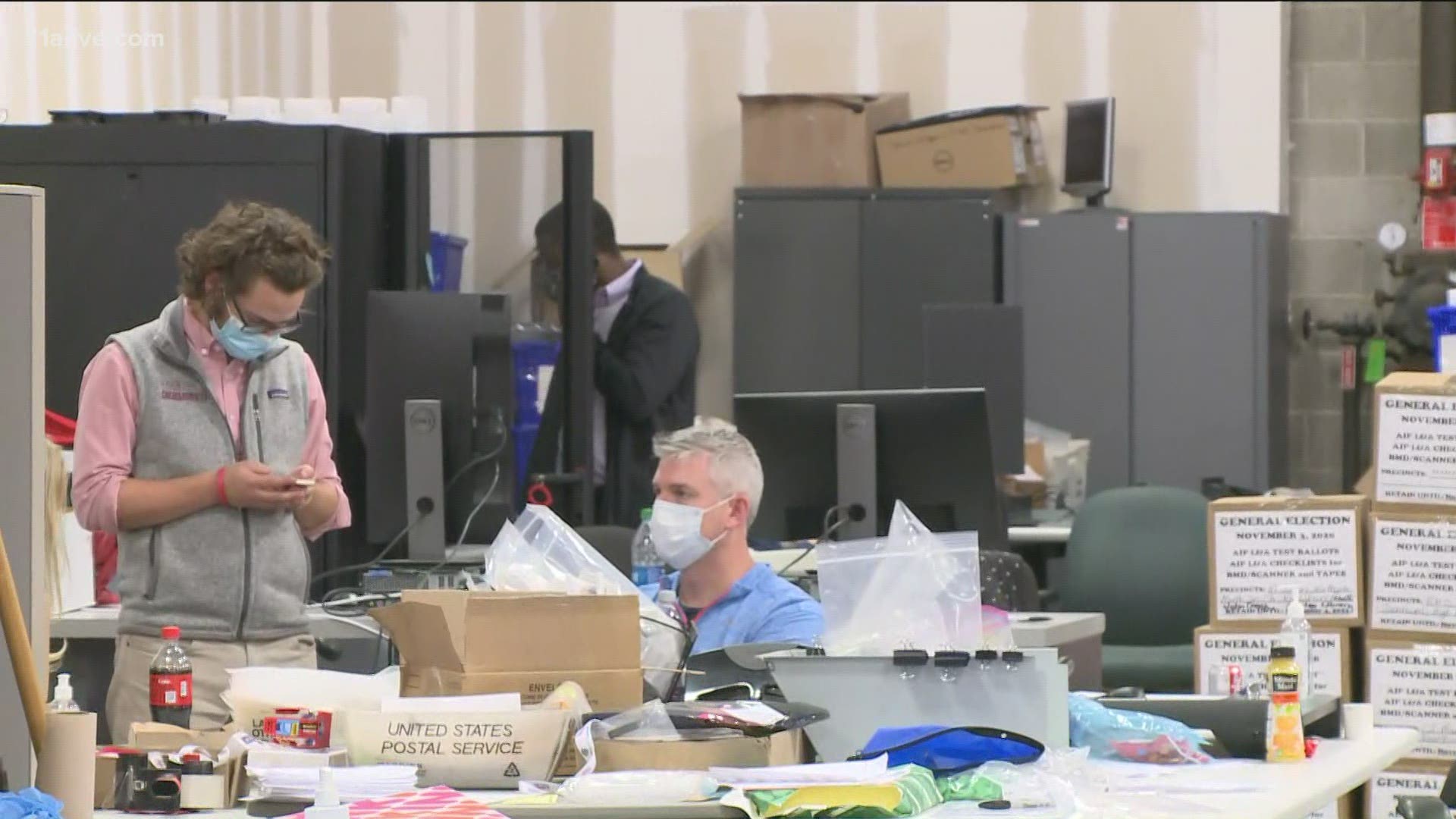 ATLANTA — Election Day may be over, but ballots across America are still being counted - including here in Georgia.

The state didn't see a large number of problems on Tuesday, which was a completely different sight from the June primary when many voters reported standing in line for hours.

The official count of votes, however, has been impacted by some road bumps.

As anticipated, some races have been called while others remain in limbo. Here's a recap of some of the key moments in Georgia from election night.

Who's winning the presidential race?

No call has been made in the presidential race in Georgia yet.

From the secretary of state's current official count as of 8:00 p.m., President Donald Trump leads Joe Biden by about 44,000 votes.

Nationally, Trump falsely claimed to have won the election at around 2:30 a.m., while Biden called for patience.

Both U.S. Senate seats were up for grabs in Georgia. One of the races is headed to a runoff while the other hasn't been called yet.

In the open special election, the top two vote-getters, incumbent Republican Sen. Kelly Loeffler and Democrat Raphael Warnock, will face off in a Jan. 5 runoff.

Rep. Doug Collins, who was also running in the race, said in a tweet he would endorse Loeffler.

It's still too early to call incumbent Republican Sen. David Perdue's reelection race against Democrat Jon Ossoff. Perdue still needs 50% of the votes plus one vote to avoid a runoff.

What happened in Georgia Congressional races?

One of the contentious battles was the 6th District rematch between Lucy McBath and Karen Handel. To understand the race, it's important to provide context of why this U.S. House seat was being watched very closely. While McBath, a Democrat, was up for re-election, the seat once belonged to Handel, a Republican. McBath was able to hold on in Georgia's 6th District.

McBath had about 54 percent of the votes and Handel had 46 percent.

Several other House races have results. You can get a look at the numbers here.

What happened in some of the metro Atlanta local races?

In Cobb County, it was a tough night for some of the incumbents.

Cobb's Republican district attorney, Joyette Holmes - who was appointed by Gov. Brian Kemp earlier this year to be the special prosecutor in the Ahmaud Arbery case - was narrowly defeated by Democratic challenger Flynn Broady, Jr. Republican incumbent Cobb Sheriff Neil Warren also lost to Democratic challenger Craig Owens by about a 10% margin, and the Republican county commission chair, Mike Boyce, appears to have been edged out by Democrat Lisa Cupid.

And the Gwinnett County transit referendum - for a 30-year 1% sales tax to expand public transportation networks in the county - appears to have barely been defeated. Also in Gwinnett, the race to replace longtime Sheriff Butch Conway, who is retiring, was won by Keybo Taylor.

Over in DeKalb County, indications are Beverly Burks will be Clarkston's new mayor, while the city of Brookhaven voted not to repeal mayoral term limits.

Henry County looks like it will have a new county commission chair, with Democrat Carlotta Harrell projected to beat Republican June Wood. They'll also have a new sheriff, with Reginald Scandrett projected to win the race to replace retiring Sheriff Keith McBrayer.

How did the state amendments do?

They passed by wide margins.

There were two constitutional amendments - one requiring that tax revenue appropriated for certain things only be spent on those things, and another allowing individuals to sue the state for constitutional violations without needing its consent (a concept known as sovereign immunity).

A referendum allowing charities to exempt certain funds from taxes if they were to be used to build low-income housing also passed.

What issues did Georgia experience on Election Day?

While Georgia largely avoided the major headaches and miscues that have characterized recent, rancorous voting days, Spalding County did see a breakdown in voting hardware that caused what may have been the most serious disruption of the day.

Beyond that, an issue at State Farm Arena delayed Fulton County's vote, and uncounted votes from several DeKalb County drop boxes and Gwinnett's issue with scanning some ballots will keep officials working on Wednesday.