Kemp released his first television campaign ad Friday, and it is also the first political TV ad to be released in Georgia’s 2022 campaign season. 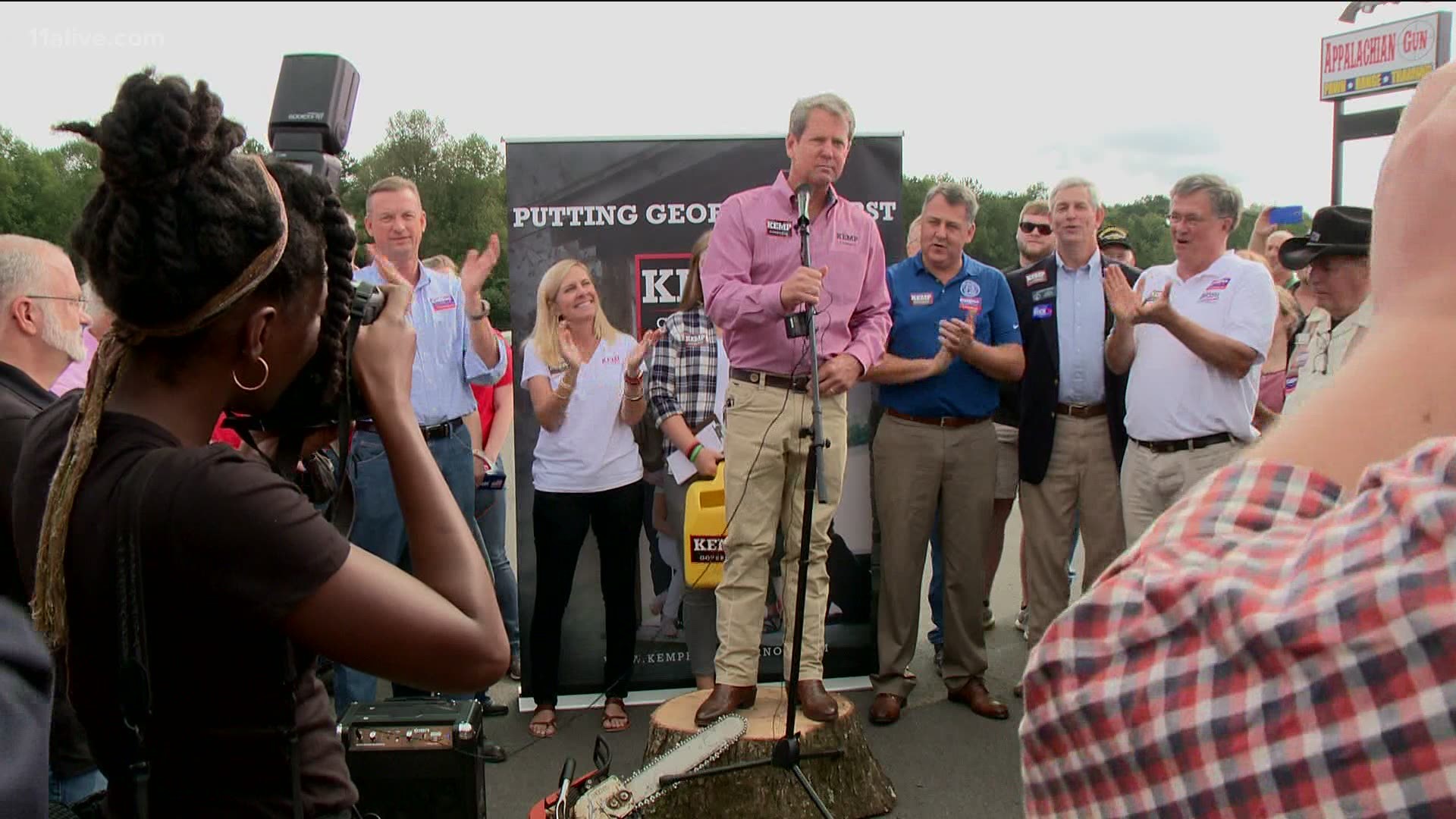 Georgia Republican Governor Brian Kemp officially kicks off his 2022 re-election campaign on Saturday, at a rally at the Georgia National Fairgrounds in Perry, in middle Georgia, south of Macon.

So far, no Democrats have announced a challenge. But some think Stacey Abrams will jump in later this year. And in a way, Kemp is already running against her.

Kemp released his first television campaign ad Friday, and it is also the first political TV ad to be released in Georgia’s 2022 campaign season.

In the ad, Kemp attacks Abrams, even though Abrams has not announced yet if she will run for governor again.

“Stacey Abrams and the liberal mob forced the All Star Game to move” out of Georgia this past April, Kemp says in his ad.

Kemp accused “Abrams and the liberal mob” of convincing Major League Baseball to move next week’s All Star Game out of Georgia as a way of protesting Kemp and the state’s new election law.

In fact, Abrams, who opposes provisions in the new law, tried to convince MLB not to move the game away.

But Political Science Professor Dr. Andra Gillespie of Emory University said Friday that Kemp’s attack-Abrams ad fits with Kemp’s first mission, as his re-election campaign begins: to win back Trump voters who are mad at him after Trump’s loss in Georgia, and then win the GOP primary against challengers like former State Legislator Vernon Jones, who considers himself a closer Trump ally than Kemp is.

How does Kemp do that?

Gillespie believes Kemp’s preparations over the past several months have given him an advantage, as he officially begins his re-election campaign.

“Brian Kemp is a very known quantity,” Gillespie said, “he has been an effective fund-raiser, so he’s putting himself into a really strong position to be able to fend off a challenge, and I don’t think that that should be discounted, even if Donald Trump turns against him.”

The Chair of the Democratic Party of Georgia, Congresswoman Nikema Williams of Atlanta, responded to 11Alive’s request for comment with an email outlining what some of the Democrats’ main talking points will be during the gubernatorial campaign.

“With members of his own party rebuking him... Brian Kemp is standing on thin ice from left to right... Georgia Democrats will be reminding voters just how much he has failed our state.” (full statement below)

The race for governor in Georgia, a purple state now, is already attracting national attention, and would likely attract even more interest if Abrams does opt for a re-match against Kemp, after narrowly losing to him the first time they ran against each other, in 2018.

“She is this national political figure, now,” Meet The Press Moderator Chuck Todd told 11Alive’s Jeff Hullinger on Friday. “She has 100 percent name ID in the state of Georgia. Voting rights and Stacey Abrams is synonymous. What else? She’s got to make the campaign about something else, besides that, I think. So what is that something else going to look like?”

As of Friday night, Abrams’ staff had not yet responded to 11Alive’s requests for comment.

Here is the full statement from Rep. Nikema Williams, the Chair of the Democratic Party of Georgia, on Friday:

“Brian Kemp has done nothing but take Georgia backwards during his tenure as governor. From our state’s bungled COVID-19 response to the racist voter suppression law rammed through the legislature, Brian Kemp has put partisan politics ahead of the rights and wellbeing of working Georgians at every turn.

“With members of his own party rebuking him and his approval ratings among voters shaky at best, Brian Kemp is standing on thin ice from left to right. While Kemp spends his re-election campaign trying to defend his awful record, Georgia Democrats will be reminding voters just how much he has failed our state. We look forward to sending him into early retirement in 2022 and electing a Democratic governor who will truly represent the people of Georgia.”