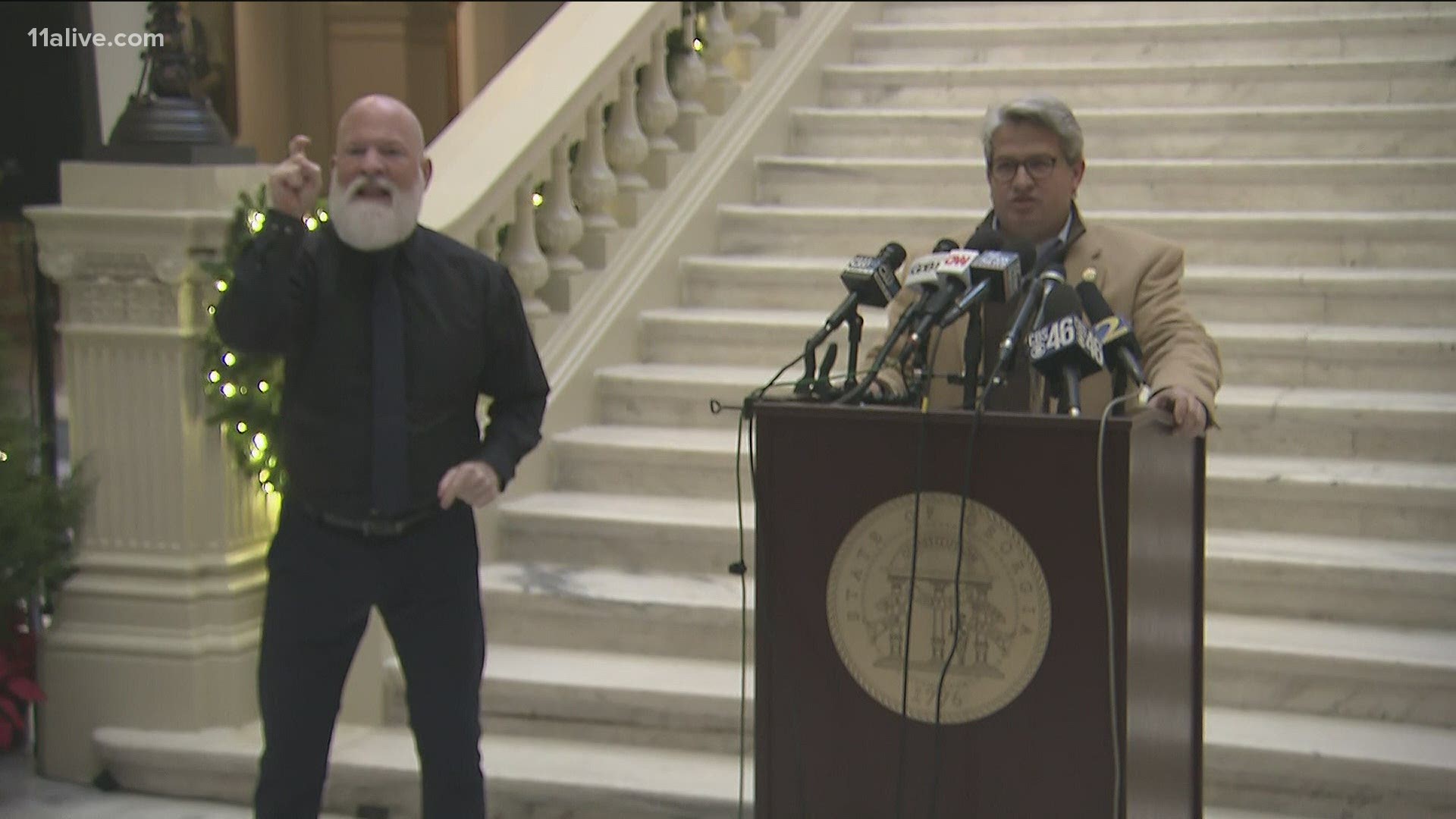 "It's. All. Gone. Too. Far," Sterling said at the start of the news conference, punctuating each word.

He was referring to threats of violence against election workers and elected officials from across the nation.

Former US Attorney Joseph diGenova called for violence against Chris Krebs, the now-former White House cybersecurity official. Krebs had called the Nov. 3 election the most secure election in American history before being fired by President Donald Trump. On a talk show Monday, diGenova said that Krebs should be shot.

Sterling mentioned a 20-year-old contractor for Dominion who had received death threats. He said the threats included a noose, saying the worker should be hanged for treason.  He said the worker was transporting a report for batches in Gwinnett County.

Kelly Loeffler and David Perdue, who echo election conspiracies without evidence and contribute to the culture of intimidation and fear, should join us in condemning those who engage in these despicable acts. Georgians deserve better from their leaders than self-serving silence.

The Georgia NAACP on Wednesday morning also condemned the threats of violence against election workers.

“These kinds of acts of violence and terror have gone unchecked and tolerated for years while Black and Brown communities screamed for help from state and national officials in Georgia. All [they] did was turn a blind eye because of their allegiance to the Republican Party and not to the people,” said Rev. James Woodall, Georgia NAACP president.

On Tuesday, 11Alive reached out to Senators David Perdue and Kelly Loeffler for comment on Sterling's statements.

We received a statement from each campaign that read:

"Senator Perdue condemns violence of any kind, against anybody. Period. We won’t apologize for addressing the obvious issues with the way our state conducts its elections. Georgians deserve accountability and improvements to that process — and we’re fighting to make sure the January 5th election is safe, secure, transparent, and accurate." - John Burke, Communications Director, Sen. David Perdue

“Like many officials, as someone who has been the subject of threats, of course Senator Loeffler condemns violence of any kind. How ridiculous to even suggest otherwise. We also condemn inaction and lack of accountability in our election system process—and won’t apologize for calling it out. Senator Loeffler will continue fighting to ensure we have a fair, trusted, and accurate election because the future of our country is at stake.” - Stephen Lawson, Campaign Spokesperson, Sen. Kelly Loeffler

The president retweeted a video from 11Alive's Chief Investigator Brendan Keefe that shows a clip of Sterling from the news conference.

Rigged Election. Show signatures and envelopes. Expose the massive voter fraud in Georgia. What is Secretary of State and @BrianKempGA afraid of. They know what we’ll find!!! https://t.co/Km7tRm2s1A

He claimed this was a "rigged election" and that there was "massive voter fraud" in Georgia. Election officials, however, have said repeatedly there has been no evidence of widespread fraud. Additionally, Twitter tagged the president's tweet with a note, saying, "This claim about election fraud is disputed."

On Tuesday, U.S. Attorney General William Barr said that the Justice Department has not uncovered evidence of widespread voter fraud that would change the outcome of the election.

Twitter also put a disclaimer on the president's tweet, saying "this claim about election fraud is disputed."