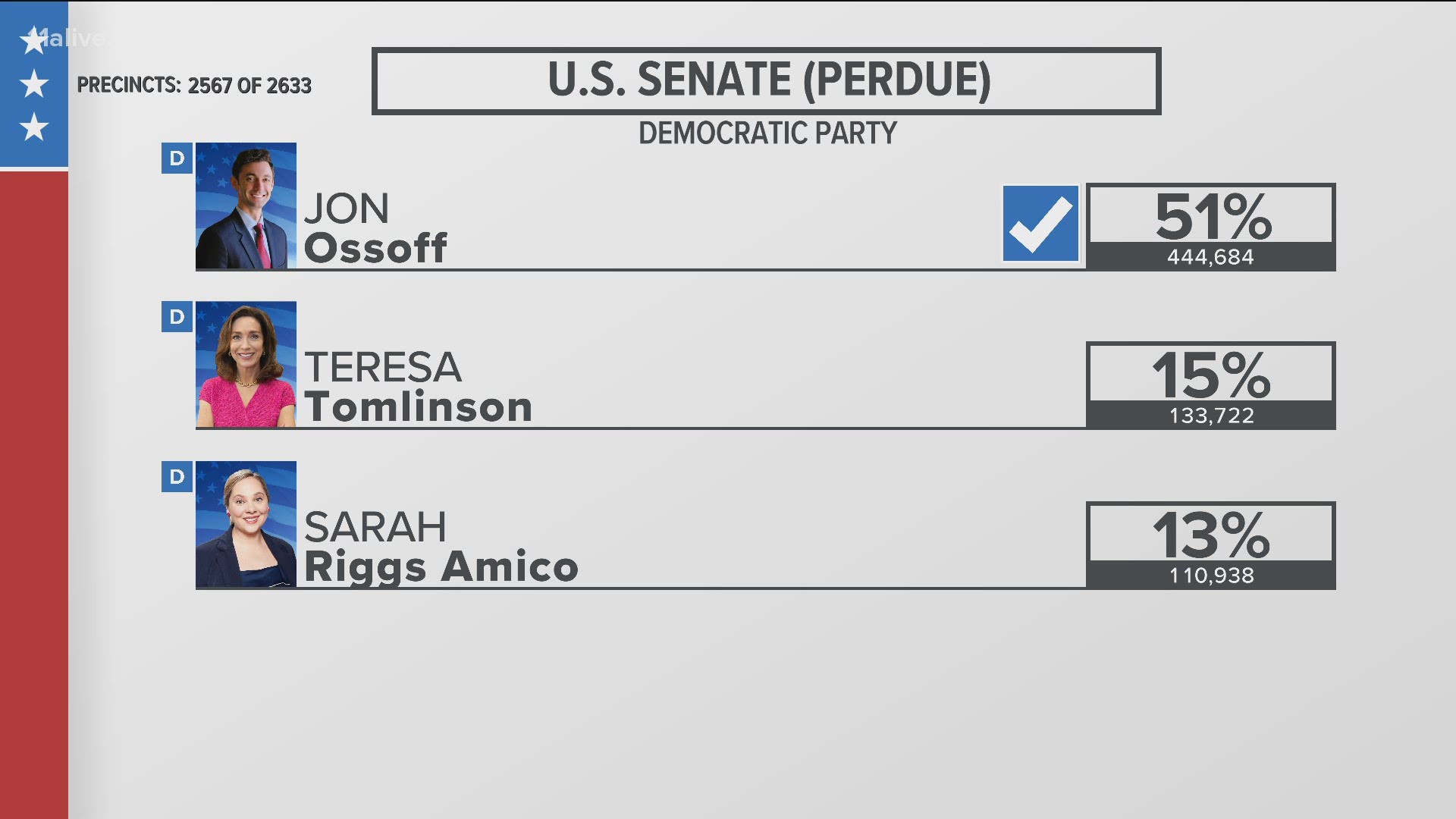 As Georgia voters took to the polls yesterday to cast their ballots in a number of crucial primary elections, many faced long lines and delays.

Georgia is making national news over the voting issues that have been seen most notably around Atlanta, but in other pockets around the state as well.

Due to those issues, results from some races are still coming in.

We'll continue tracking developments and bring you breaking results as they come in.

Did you have issues with casting your vote? Email us at whereatlantaspeaks@11alive.com.

“Our momentum is unstoppable. We will build a country with great health care for every citizen, with equal justice and civil rights for all, with world-class sustainable infrastructure, and a clean political system,” said Ossoff in a statement .

His team also tweeted a live video of remarks.

Jon Ossoff @ossoff1
We won the Democratic nomination for U.S. Senate in Georgia! Tune in LIVE for my remarks:

9:14 p.m. | Shortly after Jon Ossoff won the Georgia Senate primary, one of his opponents, former Columbus Mayor Teresa Tomlinson made the following statement:

“I couldn’t be more honored to have earned the support of thousands who are ready for real change,” Tomlinson said. “After spending the past year traveling our beautiful state, hearing the concerns of everyday Georgians, and seeing the renewed energy of the progressive movement, I have hope that our nation will soon be moving in the right direction.

“Thank you to all the supporters, donors, and volunteers who made our campaign possible. Even though we came up short in this election, we made a powerful statement that our communities and families will not stand for the destructive policies of the right wing, either here in Georgia or in Washington, D.C.

“I want to thank my opponents in this race and congratulate Jon Ossoff on his victory. I call on my supporters, and all Georgians, to do all they can to support Jon in his campaign to defeat David Perdue and Donald Trump in November.”

“Georgia Democrats nominated a part-time filmmaker and liberal elite with zero real world accomplishments as their party’s standard bearer. Despite his privileged lifestyle funded with daddy's money, Jon Ossoff’s only notable achievement is spending millions of dollars on his failed Congressional bid,” said Perdue for Senate Campaign Manager Ben Fry. “Now more than ever, Georgians need outsider David Perdue and his experienced leadership in the U.S. Senate. While Jon Ossoff is a favorite of liberal elites and Hollywood celebrities, he will be nothing but a rubber stamp for Nancy Pelosi and Chuck Schumer and their radical agenda.”

7:05 p.m. | Georgia Secretary of State Brad Raffensperger released a statement regarding Tuesday's election. Read it below.

The Secretary of State’s Office cannot administer elections, every Georgia county is charged with that responsibility. But what is clear from yesterday, is that while almost every county delivered successful elections—a couple did not.

I am working with the General Assembly to help give the State greater authority to directly intervene and require management changes as well as call for the counties themselves to pay for the remedial action. My office’s POST-certified law enforcement officers will undertake a complete and thorough investigation into what happened in Fulton County, including not just what happened yesterday but also any improperly handled absentee ballot applications.

We are here to protect every voter. Republicans, Democrats and Independents deserve well run elections. That is why we are proposing to the General Assembly legislation that will enable the state to intervene and look into failing elections offices, when it’s clear there are continued failures.”

6:00 p.m. | Fulton County Chairman Robb Pitts today announced the formation of a Special Election Task Force to review the problems associated with Tuesday's primary election and prepare for the August 13 run-off and the November 3 general election. The Task Force will be made up of key Fulton County executives as well as members of the business community including a consulting firm.

"This is not a question of politics, it is a question of moral leadership. As you know, Georgians in counties from Gwinnett to Muscogee to Chatham were turned away due to technical failures, and in some cases, precincts had no working voting machines at all. In other instances, polling locations operated without all of their equipment being delivered, lost power, opened late, and ran out of provisional and emergency ballots," the letter said in part. "Following reports that thousands of requested absentee ballots never reached their destination, I’m concerned that without increased oversight severe consequences will fall upon us in November."

None of the three candidates were on the ballot yesterday, with no primary held for the special election, which pits Democrats and Republicans against each other in an open field for former Sen. Johnny Isakson's old seat, held by Loeffler after her appointment by Gov. Brian Kemp in January.

Others in the race include Democrats Matt Lieberman, the son of former Connecticut Sen. Joe Lieberman, and former U.S. Attorney and Georgia State Sen. Ed Tarver.

4:30 p.m. | With 96% of precincts reporting, 11Alive's election returns show Jon Ossoff now clearing the 50% threshold to avoid a runoff for the Democratic Senate nomination. If he falls back below, he will face either Teresa Tomlinson or Sarah Riggs Amico one-on-one in the August runoffs.

There are still more than 100 precincts to report, plus ongoing counts of absentee and provisional ballots.

3:45 p.m.: | Barrington Martin II, the millennial who ran a pro-universal healthcare, pro-universal income, pro-Second Amendment campaign against Rep. John Lewis, said in a statement it "was such an honor to share the ballot with such a legend and American icon" and that "I hope that I earned his attention and respect to be under his tutelage."

3:00 p.m. | Cobb County has provided an update on their vote-counting situation. A county spokesman provides this info:

2:45 p.m. | Sarah Riggs Amico, the 2018 candidate for lieutenant governor, is third in the Democratic Senate primary, but close enough to former Columbus Mayor Teresa Tomlinson in second that she could conceivably leapfrog her and go to a runoff with Jon Ossoff if he stays under 50 percent.

Earlier Tomlinson put out a statement effectively declaring herself second, saying, "Now that it is a two-person race, we are looking forward to voters learning more about my record as a successful two-term Mayor and Public Safety Director who has won elections and governed and governed well."

Amico issued a stinging statement this afternoon in an apparent rebuke of that tone of finality.

"Any candidate claiming victory based on partial results is dishonoring the voices of hundreds of thousands of voters who, in good faith, turned in absentee ballots or stood in long lines late into the night in the pouring rain to make their voices heard," the statement said in part. "It is a slap in the face to every Georgia voter for a candidate to unilaterally declare an outcome in this race when hundreds of thousands of ballots remain uncounted."

12:30 p.m. | Jon Osssoff's campaign will hold a Zoom press conference at 1:15 p.m. this afternoon to "discuss his U.S. Senate primary election, steps his campaign will take to defend the voting rights of every Georgian, and grave concerns regarding yesterday’s election.," the campaign said in a release.

11:50 a.m. | Former Columbus Mayor Teresa Tomlinson, who is currently polling in second place in the Democratic Senate primary at 15%, is already counting on a runoff and taking a shot at the leader in the race, Jon Ossoff (who stands at 49%).

“Voters in Georgia know we need a strong candidate to take on David Perdue and even though Jon is universally known, a majority of voters have rejected him again," Tomlinson said in a statement on Wednesday.

Tomlinson can't quite bank on a runoff just yet, though - with only 93% of the vote counted (as absentee and provisional ballots continue to be counted in some large counties), 2018 lieutenant governor candidate Sarah Riggs Amico, in third at 13%, could conceivably catch her.

“Many are asking for our take on yesterday’s election process. Well honestly, rage comes first, but that only ignites our work” Nse Ufot, CEO of New Georgia Project, said in a release. “There is a conscious disregard for Georgians by Governor Brian Kemp and Secretary Brad Raffensperger; from lack of preparation to lack of responsibility, showing that these folks are not what this great state is about. We stand with our brothers and sisters throughout Georgia to say – enough is enough.”

10:10 a.m. | The Georgia NAACP has announced it will organize a "March on Georgia" for Monday at 9 a.m. to "address the systemic criminal justice and electoral failures immediately and with the upmost urgency as they continue to lead to the dehumanization, disenfranchisement and death of too many Georgians," according to a release.

9:00 a.m. | We've received word from Gwinnett County and Cobb County that they are still counting absentee ballots today. If you've checked your status and found that your mail-in vote hasn't been counted, that may explain why in some instances.

We are also told that, in Gwinnett and Cobb, provisional ballots are not yet considered official and are not a part of the current vote tally. Guidance from the secretary of state's office isn't clear on how provisional ballots should be addressed when the issue is machine or precinct related, as was the case around parts of metro Atlanta yesterday.

6:05 a.m. | The long-standing wrangle over voting rights and election security has come to a head in Georgia. The state's messy primary and partisan finger-pointing offer an unsettling preview of a November contest when battleground states could face potentially record turnout.

5:25 a.m. | The Democratic Senate primary in Georgia is too early to call. In Georgia, candidates must win more than 50% of the vote to avoid a runoff. With more than three-quarters of the expected votes counted as of 5:00 a.m., Jon Ossoff has approximately 49% of the counted vote.

5:00 a.m. | Results are still coming in from Georgia's primary election.

Votes will count Tuesday in US Senate primary