So far there has not been any indication Georgia's third count of its votes will show any significant discrepancy. 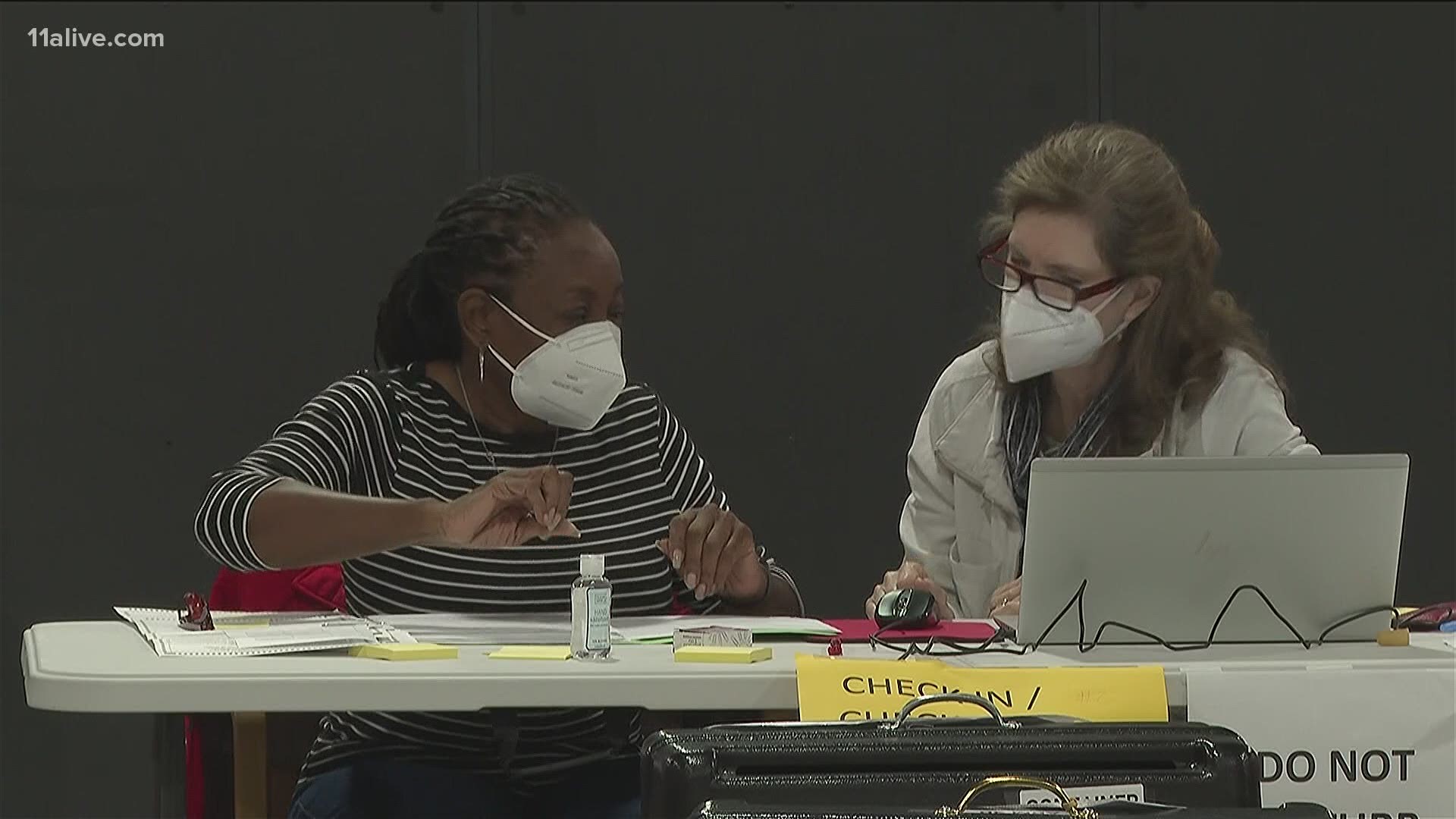 ATLANTA — The deadline came and went at midnight for Georgia's counties to finish their official recounts, and now the wait is on for the full results.

Those results are being posted on the Georgia Secretary of State's website - so far, throughout this more than weeklong process, there has been no indication this recount, Georgia's third count of its votes, will reveal a significant discrepancy from original totals.

The state is expected to re-certify its results on Friday, and then Gov. Brian Kemp will re-certify the Democrats' winning slate of Electoral College voters.

That will mark the official end of Georgia's election process, at least as far as the responsibilities of state leaders go.

To the extent the election will continue to be contested in Georgia, it will do so in the courts. One prominent suit filed by attorney Lin Wood faces an appeal at the 11th Circuit U.S. Court of Appeals after being dismissed, and Sidney Powell's so-called "Kraken" suit has yet to be heard in the U.S. District Court for the Northern District of Georgia - the court that dismissed Wood's suit.

According to federal law, legal challenges to the election results must be resolved by Dec. 8.

Then, Electoral College voters around the country are scheduled to cast their votes on Dec. 14.

11:25 p.m. | Earlier in the evening, Oprah Winfrey held a "Georgia on My Mind" virtual event to talk about the upcoming Senate runoff races. There were other special guests a part of the event. Watch a short recap below.

11:15 p.m. | The Secretary of State's website hasn't updated since earlier in the evening. It still appears there are about 3,200 votes outstanding in Fulton. The Fulton County Board of Registration and Elections is expected to hold a virtual special meeting at 9 a.m. Friday to recertify the results. Watch the latest update below.

The hearing began at 1 p.m., during which a Senate Judiciary subcommittee took "testimony of elections improprieties" and evaluated "the election process to ensure the integrity of Georgia's voting process." It also featured comments by the President's own personal attorney, Rudy Giuliani.

Re-watch the full hearing below.

5:15 pm | The state has nearly concluded its recount, and is awaiting a few more votes. About 3,000 votes appear to be outstanding in Fulton County.

Joe Biden appears to have won Georgia for a third time. The recount results are not official — and at least 3,000 ballots appear to remain outstanding from Fulton County — but the current margin is 10,422. pic.twitter.com/K1cPgk8wgF

4:55 pm | The Senate hearing has resumed. Officials said they plan to listen to testimony through about 7 p.m.

2:20 p.m. | It's important to note that this is, pretty fundamentally, the same case that Sidney Powell's suit will make to the U.S. District Court for the Northern District of Georgia.

The reason they're making it now to the Georgia Senate is that an important second prong of the strategy to flip Georgia to President Trump is to convince the Georgia General Assembly to re-write the state's election laws so that hand-picked Electoral College voters may be selected to give the state's votes to Trump.

This was what Ray Smith III, the lawyer who argued Lin Wood's original suit (which was dismissed) to try and stop Georgia from certifying its results, explicitly asked for at the start of proceedings.

2:15 p.m. | So far this hearing has featured Rudy Giuliani and a number of other figures connected to the Lin Wood and Sidney Powell "Kraken" suit.

They seem to be effectively laying out the basic conspiracy theory that underpins that lawsuit, including testimony from men whose accounts are central to the suit.

The president himself has taken note of the proceedings, seizing on video presented by lawyers from State Farm Arena on Election Night, where counting continued after election observers and media were asked to leave at around 10 p.m.

In that instance, Matt Mashburn, a Republican on the State Election Board, has said a board-appointed election monitor was present while that counting went on.

12:50 p.m. | Another Georgia state Senate election hearing is being held, this time by a Senate Judiciary subcommittee, in about ten minutes.

You will be able to watch it here.

Georgia's recount numbers are still not finalized yet. No news conference this morning because of the GA Senate hearings on the election. The official/preliminary SoS tally shows about 130,000 ballots still to be uploaded. Biden leads Trump.https://t.co/T4WRXNi1gf

11:35 a.m. | In other election news, Rep.-elect Kwanza Hall will officially be sworn in as a member of Congress shortly after noon. Hall won the special election runoff to fill the remainder of the late Congressman John Lewis' term - which is about a month, until Rep.-elect Nikema Williams, who won the November general election, takes office at the start of the new congressional term.

11:15 a.m. | The president referred to Gov. Brian Kemp as a "Republican" in quotes in a tweet, and Kemp's press secretary Cody Hall has responded with reissuing a statement from earlier this week:

10:50 a.m. | As a state Senate hearing is conducted on the election inside the Capitol, here's how it looks outside:

Just outside the Capitol, pro-Trump protesters chant “Stop the Steal.” Inside, election officials reiterate there was no conspiracy to steal the election or widespread fraud that changed results from three separate vote counts #gapol pic.twitter.com/itrlTNPjYV

9:55 a.m. | 11Alive's Brendan Keefe has spoken to the Secretary of State's Office and gotten some clarity on how the results are being reported today:

"People are finalizing and uploading" data from the Georgia recount right now, the Secretary of State's office tells me. The numbers visible online now are not complete. Stay close...

9:40 a.m. | The Georgia Senate Government Oversight Committee is now holding a hearing on the election, which you can watch here.

8:15 a.m. | The Secretary of State's website has started to update some things this morning, though the full results are not yet reflected.

7 a.m. | Here's how things stand in Georgia as far as the recount is concerned: The Secretary of State's website hasn't updated since 10 p.m. last night, so it's still showing only 142/159 counties as having completed their recounts.

We know that some counties among those being shown as not yet complete have said they're done - Fulton County, for instance, tweeted just before 1 a.m. that they were done.

Fulton County has completed the recount of the November 3 Presidential Election. Results will be released by the Secretary of State's Office.

About 528,000 votes are not yet reflected in the official totals so far.

A local statistician, Eli Spencer Heyman, is projecting on current returns that Joe Biden's lead will be about 12,642, down slightly from the original margin of 12,670.