Voters in Georgia will head to the polls on Tuesday, Jan. 5 to vote in the U.S. Senate runoffs. 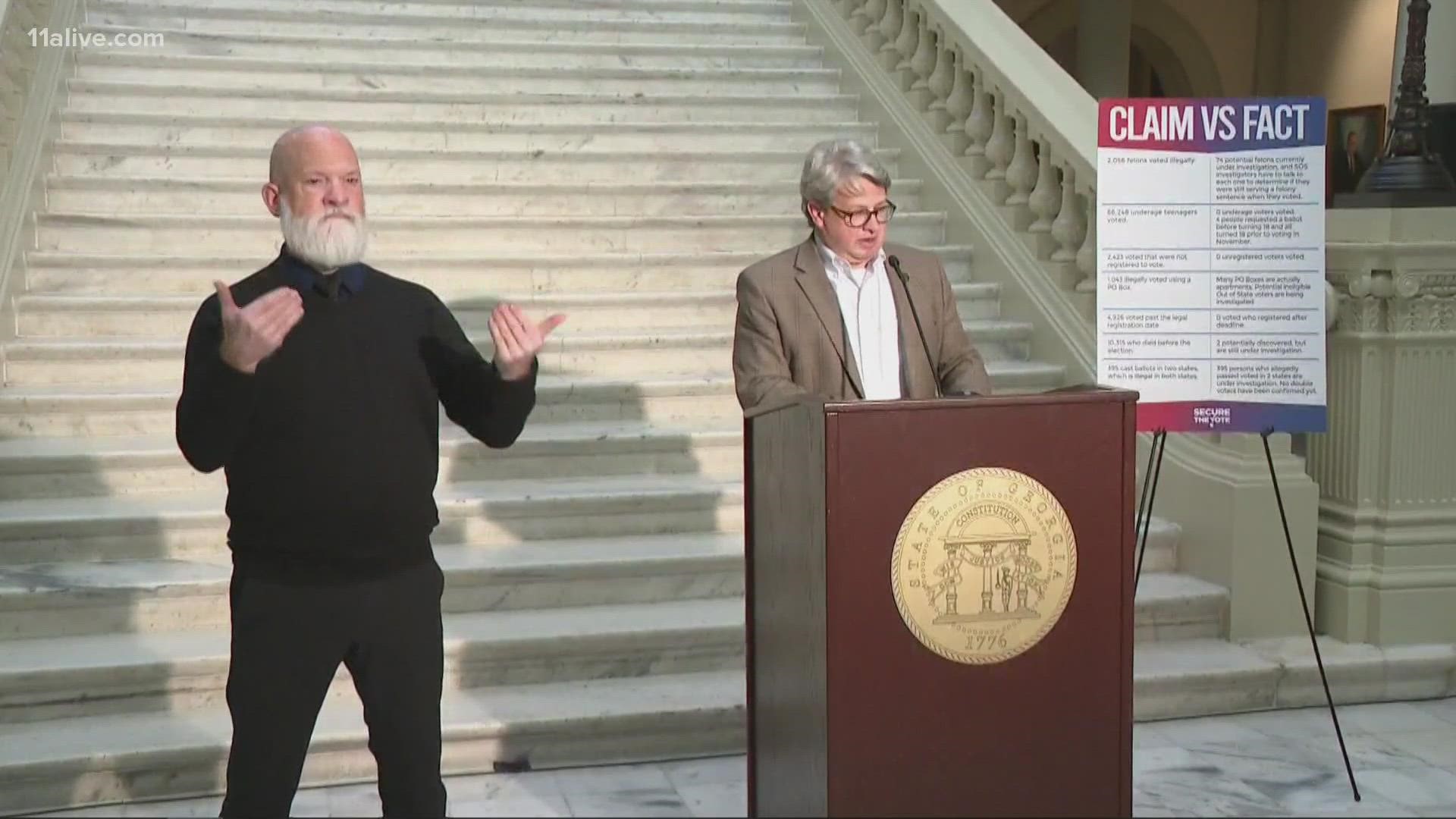 The event started at 3 p.m. at the State Capitol and was streamed on 11Alive.com and on the 11Alive YouTube channel.

With all eyes on Georgia ahead of election day, a lot of the attention shifted in the past 24 hours to a leaked phone call with Sec. of State Brad Raffensperger and President Donald Trump.

Gabriel Sterling, voting systems manager for the Georgia Secretary of State's office, began the event by urging all Georgians to get out to vote.

He then continued to explain, case-by-case, claims of voter fraud, including ones brought up by the President.

You can watch a replay of the news conference here:

In the audio first released by The Washington Post, then obtained by 11Alive, the president chastises Raffensperger, while declaring he won the presidential election in Georgia.

During the hour-long call, Trump asked for Raffensperger to find 12,000 votes and recalculate Georgia's Nov. 3 results.

Raffensperger told 11Alive News on Monday that his office will not launch a criminal investigation of the Trump tapes that were leaked, but that wouldn't stop the District Attorney or other agencies if they begin an investigation.

He also said that the recording would have never been leaked if it weren't for Trump's earlier Tweets.

The secret Trump/Raffensperger recording was released because of the president's false tweet about the Secretary of State. Listen to @GaSecofState tell us that there was no confidentiality stipulation & why any expectation of privacy on the call was shattered by @realDonaldTrump pic.twitter.com/qvNgfjxIoa

Trump, in the Tweet, said Raffensperger "has no clue" and that "He was unwilling, or unable, to answer questions such as the 'ballots under table' scam, ballot destruction, out of state “voters”, dead voters, and more."

Raffensperger responded to the Tweet saying the truth would come out soon.

Meanwhile, voters across the Peach State will head to the polls to make their picks for the U.S. Senate seats. Republican Sens. David Perdue and Kelly Loeffler look to keep their seats in Washington D.C., while Democrats Jon Ossoff and Raphael Warnock have other plans.

The Secretary of State's office said more than 3 million Georgians had voted early in-person or voted absentee by mail before Election Day, which is Tuesday. Jan. 5.

RELATED: What to expect as Georgia counts runoff election votes