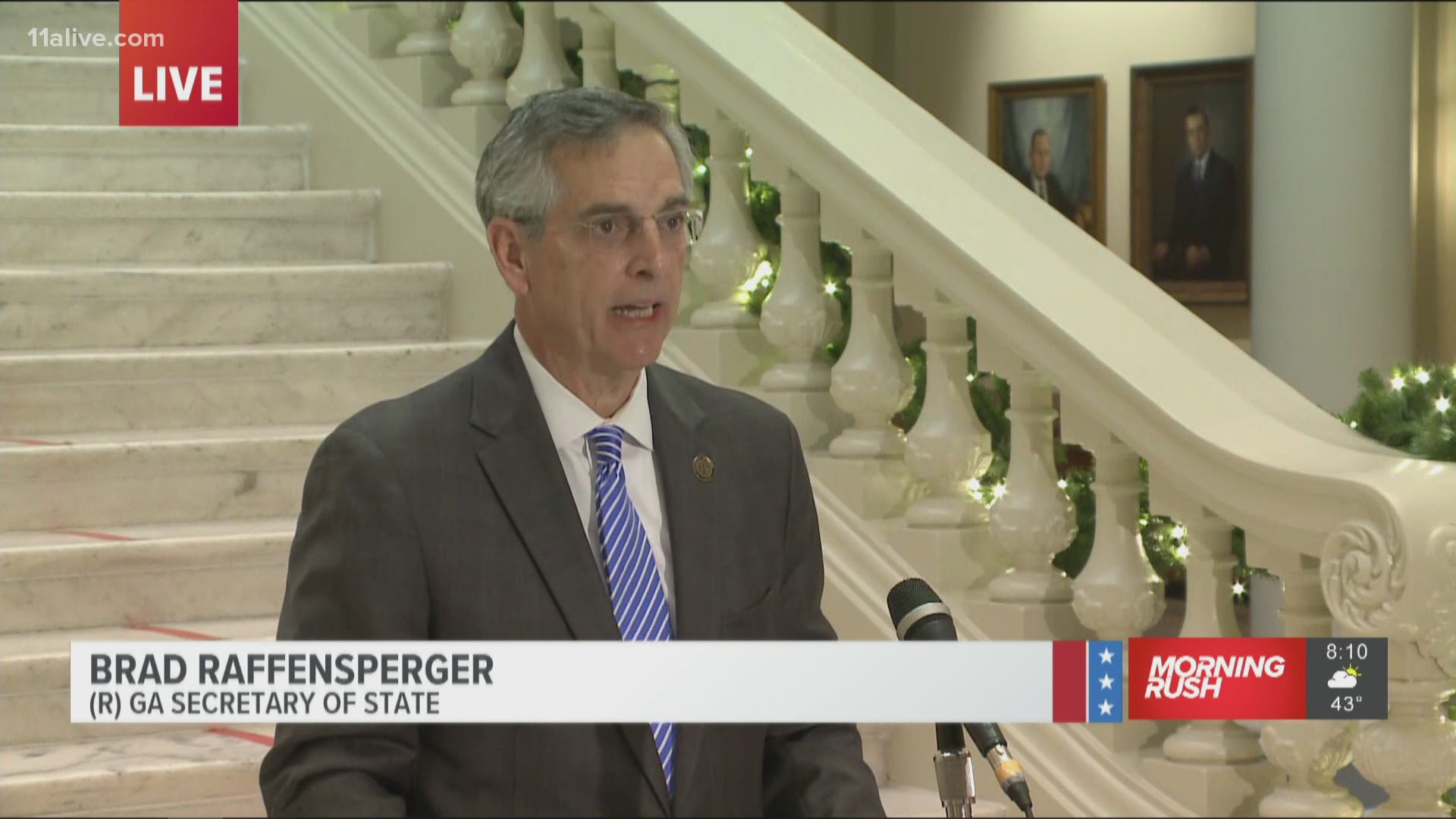 ATLANTA — In the wake of a contentious election marked by largely baseless charges of fraud and careful attention to detail to counter those claims, Georgia Secretary of State Brad Raffensperger proposed three changes to the state's election processes he said would better uphold peoples' faith in democracy.

Raffensperger spoke at the State Capitol early Friday morning, after the state released its final election results the night before. Georgia is set to finally certify its results on Friday, more than two weeks after Election Day, following an extraordinary hand-count audit of more than 5 million ballots - said to be the largest such effort in U.S. history.

Sec. Raffensperger said he was confident that monumental effort had gotten things right. He described himself as a "passionate conservative" and "proud Trump supporter" who was disappointed the president did not win Georgia.

But as a trained engineer, he said he lives by the motto: "Numbers don't lie."

But he said the margins of a vote such as Georgia's "leads to fights that are as fierce after Election Day as the campaigns before.

"Close elections sow distrust," Raffensperger said. "People feel like their side was cheated."

To provide for a better foundation of public faith in the democratic process, the secretary offered three changes to the current system in Georgia:

Legal analyst Page Pate said he supported the state intervention idea, saying there needs to be more uniformity among the counties in the way elections are administered.

"I think some consistency in the system would be a good idea, as long as it's well run," Pate said.

The measures, if taken up by the Georgia General Assembly and endorsed by Gov. Brian Kemp, would likely find resistance from Democrats.

They have argued frequently this decade against voter ID measures, arguing they suppress voter participation - a charge Raffensperger specifically denied, saying, "we know that claims that it would suppress votes have been proven wrong with empirical evidence and empirical studies."

Pate said photo ID requirements for absentee ballots could foster mistrust in the system and dissuade voters from participation out of fear of fraud and identity theft.

"The possibility for identity fraud, I think, is realistic," Pate said. "I think that would suppress the number of absentee ballots going forward."

Democrats have also at points argued against paring voter rolls, saying they inadvertently sweep up and purge lawful voters.

Raffensperger, though, said the measures would ensure that in future close elections, the system's integrity would be more difficult to question.

"These measures will improve the security of our elections and that should give lead to greater public trust," he said. "Our first goal is carrying out elections successfully and getting the results right. Our second goal is upholding the peoples faith in our democracy by demonstrating the integrity of our process."