Loeffler thanks supporters, says she called Warnock to 'wish him well in serving this great state'

Here is a recap of what happened Thursday. 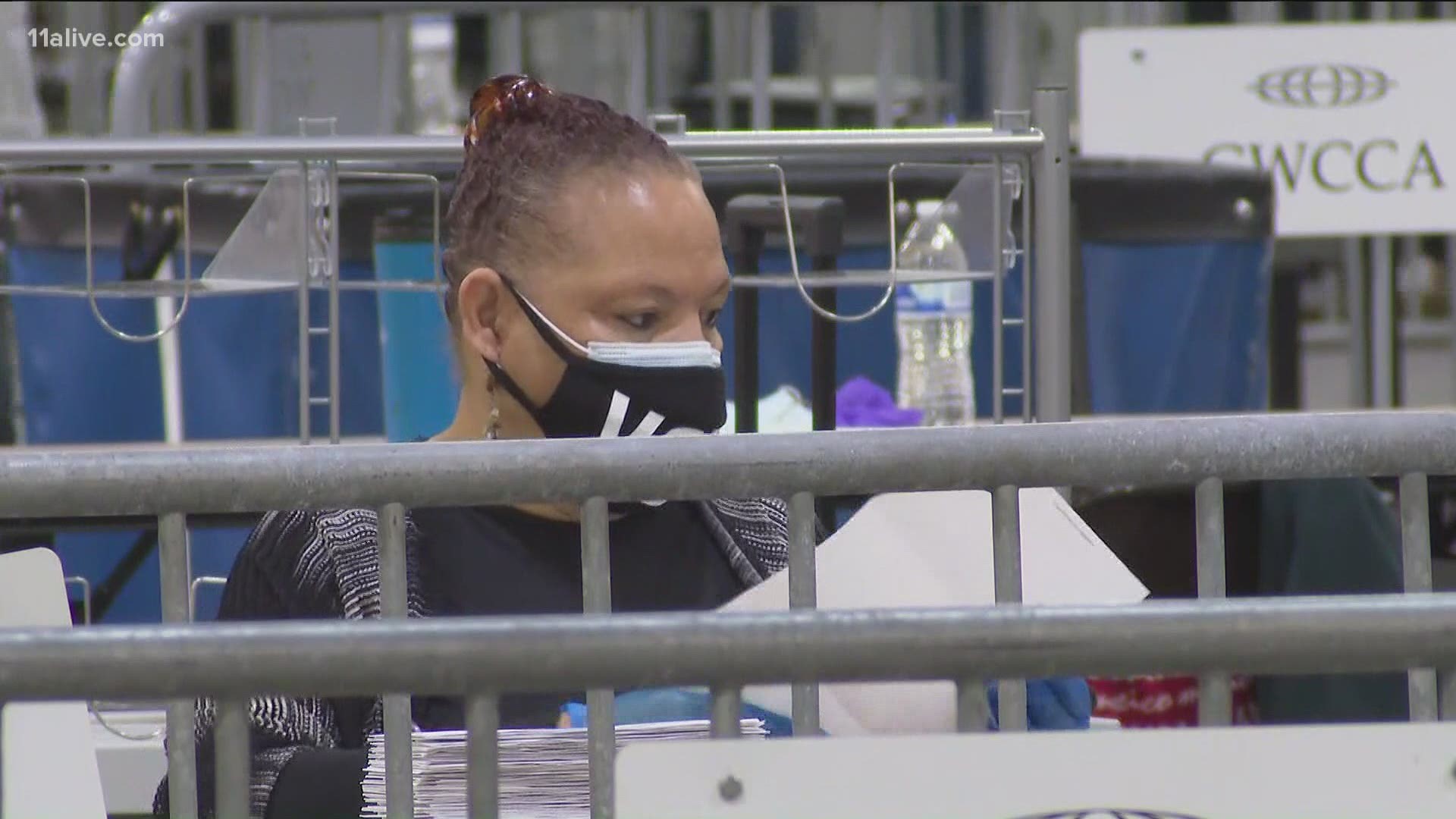 ATLANTA — Counties with votes still left to count in Georgia resumed on Thursday after some, including Fulton and Gwinnett, interrupted their work as a precaution when violence broke out Wednesday at the U.S. Capitol.

Counting is all but complete outside of a handful of batches of votes in these counties, with both Democrats, Rev. Raphael Warnock and Jon Ossoff, projected to win their races against Republican incumbent Sens. Kelly Loeffler and David Perdue.

Counties will not be able to begin certifying their results until after Friday, as military and overseas ballots are allowed to be received by then as long as they were postmarked by Election Day.

Once they are done, Secretary of State Brad Raffensperger will certify the results and Warnock and Ossoff can be sworn in as senators. Their projected victories will give the Democrats control of the Senate, with a 50-50 split and Vice President-elect Kamala Harris holding the tiebreaking vote.

11Alive monitored updates as they came in on Thursday. (please note all times are Eastern) Here is a look at what happened.

9:30 p.m. | Earlier in the evening, Gov. Brian Keep congratulated Rev. Raphael Warnock on his historic win. In his tweet, he also said Sen. Kelly Loeffler fought hard for Georgians during her time in Washington.

Read his tweet below, including his congratulatory message to Bubba McDonald, who will be returning to the Georgia Public Service Commission.

I would also like to thank Senator Kelly Loeffler for her dedicated service to our state. Marty, the girls, and I are very proud of her many accomplishments on behalf of all Georgians and deeply appreciate her willingness to answer the call to public service.

I congratulate Senator-elect Warnock on his historic election to the U.S. Senate and look forward to working together on behalf of all Georgians.

"Unfortunately we came up slightly short in the runoff election," she said. "And earlier today I called Rev. Warnock to congratulate him and to wish him well in serving this great state."

Listen to her message below.

Serving our great state has been the honor of my lifetime.

2:20 p.m. | Rep. Buddy Carter has issued a statement about yesterday's events. He was among the Georgia Republicans who had signaled they would object tp the state's electoral votes being counted yesterday, which Rep. Jody Hice officially lodged early Thursday morning after a pro-Trump mob besieged the Capitol to interrupt proceedings.

Rep. Carter called yesterday "one of the saddest days of my life" but defended the decision to object to Georgia's votes over a settlement agreement Sec. of State Brad Raffensperger entered into last year with Democratic groups over how signature matching was to be done in the elections.

That agreement has been explicitly upheld as lawful twice by federal judges.

I want to take a moment to share my thoughts about yesterday and explain why I objected to the certification of electoral votes last night. pic.twitter.com/KmCPL2Ym1K

1:25 p.m. | Georgia Secretary of State Brad Raffensperger has released a letter with what he says is a point-by-point refutation of election fraud claims.

You can read that letter here.

While rioters shamefully destroyed this tribute to my brother John Lewis yesterday, let his words continue to echo in the halls of Congress and in our hearts. Let us always stand up, speak up, and speak out against injustice and for our democracy. pic.twitter.com/IwLfLQc6f0

12:30 p.m. | Georgia connections to the Capitol riots yesterday, including one of the people who died of what's been described as a medical emergency. Read more here.

The 4 people who died yesterday at the U.S. Capitol were just IDed by @DCPoliceDept. Among them, a 34-year-old woman from Kennesaw, #Georgia. Police say she died as the result of a medical emergency. @11AliveNews

Among the 14 arrests made yesterday by DC @CapitolPolice was 65-year-old Grant Moore of Buford, #Georgia. He's accused of carrying a pistol without a license and unregistered ammunition. @11AliveNews

11:30 a.m. | Some Georgia-related updates from the Capitol riots yesterday. In the wake of the events in Washington, Georgia Reps. Lucy McBath and Hank Johnson signed on to a letter sent by Democratic House Judiciary Committee members to Vice President Mike Pence asking for him to invoke the 25th Amendment for the removal of President Trump from office. You can read more about that here: McBath, Johnson sign letter asking Pence to invoke 25th Amendment, have Trump removed from office

On the other side of the aisle, Rep. Jody Hice proceeded with challenging Georgia's election results early this morning, though it failed with Sen. Kelly Loeffler reversing course in her plans to join the objection.

The 10th District Republican has since taken to Twitter to characterize the riots as a "peaceful protest was hijacked by bad actors" and suggested some of the rioters were "masquerading as Trump supporters."

7:00 a.m. | Good morning. After a surreal, sobering day in the nation's capital, Georgia will resume the work of completing its Senate elections.

According to 11Alive's Jerry Carnes, two security guards are on hand at the Fulton County facility where workers will return today to wrap things up.