Georgia could have two runoffs for Senate. 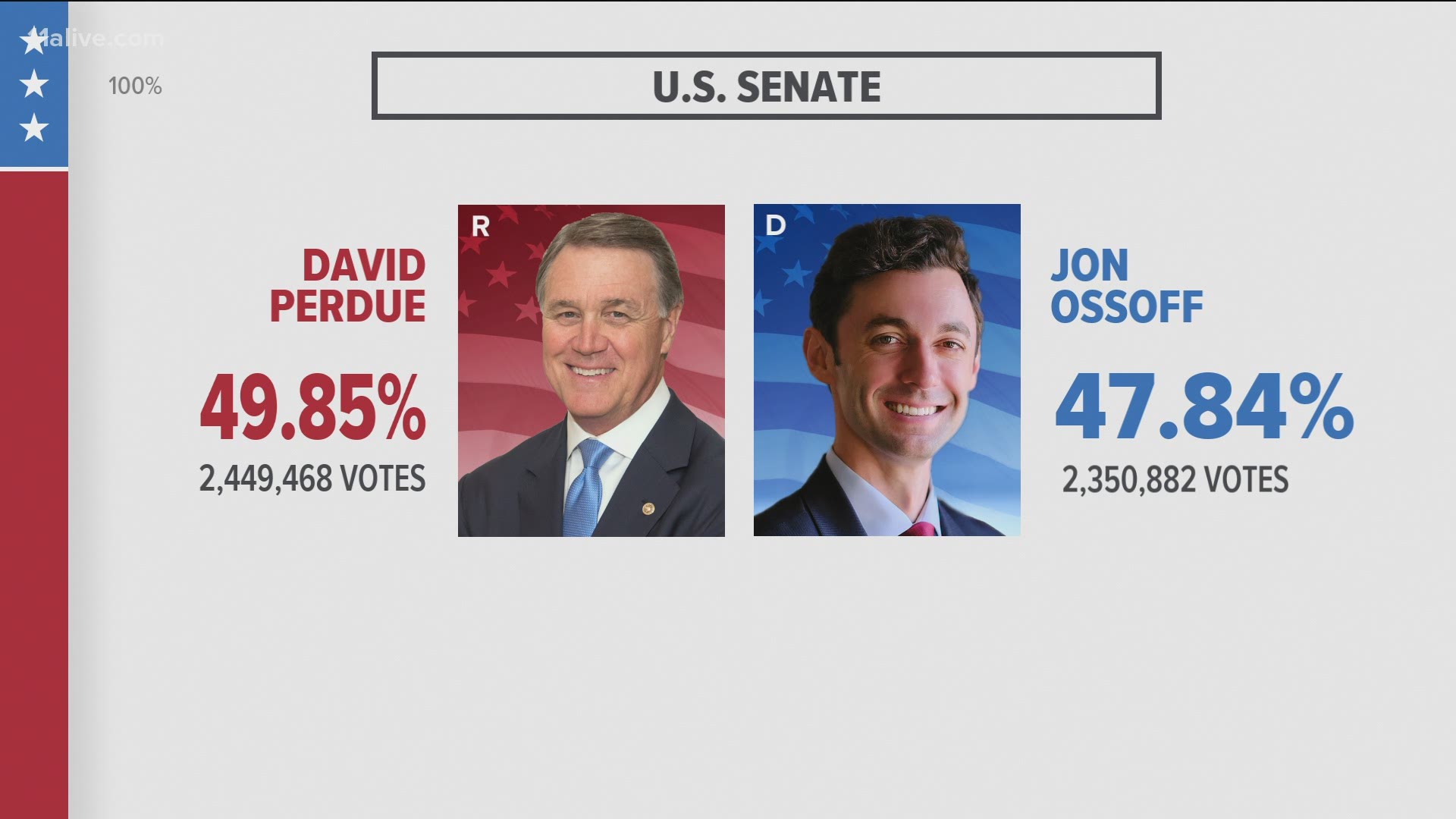 ATLANTA — Georgia voters are waiting to see if a runoff will be called between Republican David Perdue and Democrat Jon Ossoff. Independent Shane Hazel captured enough votes to make the runoff likely.

The race is one of two U.S. Senate seats from Georgia that could be headed for a runoff. Meaning, Georgia has the chance to change the makeup of the Senate.

Races go to a runoff when neither of the candidates gets a margin of 50% plus one vote. The two candidates with the most votes qualify for the runoff.

In a special election to fill the seat formerly held by Johnny Isakson, who stepped down at the end of 2019 for health reasons, Republican Kelly Loeffler, who Georgia Gov. Brian Kemp appointed to fill the seat, will face Democrat Raphael Warnock in a runoff on January 5. Warnock leads the race with more than 30% of the vote.

The Georgia Senate races are being closely watched across the nation as voters elect the next U.S. president between Republican Donald Trump and Democrat Joe Biden, as Democrats hope to capture the Senate majority, while Republicans hope to make gains in the U.S. House.

Georgia was the only state with two senate races on the ballot.

Keep in mind some vote totals will round up - as of 8:00 a.m. on Friday, the Secretary of State's website shows Perdue at 49.84%, below where he needs to be to avoid a runoff with Ossoff.

Bookmark this page and return for real-time 2020 Georgia election results as they come in. Download the free 11Alive News app (Google Play | Apple devices) to receive alerts as the numbers come in. Send us any voting day issues or questions by text at (404) 885-7600.

Who is David Perdue?

David Perdue, who turns 71 on December 10, was elected as Georgia's junior senator in 2014.

Perdue was born in Macon, Georgia, and grew up in Warner Robins. He earned a degree in industrial engineering and a master’s in operations research from Georgia Tech.

Perdue and his wife Bonnie have been married for 46, according to his bio. They have two sons and three grandsons.

Perdue has no connections to Perdue Chicken.

Who is Jon Ossoff?

Jon Ossoff was born in Atlanta.

Ossoff, who has never held public office, is described in his website bio as a "media executive, investigative journalist, and small business owner." Since 2013, he has served as CEO of Insight TWI, a media company that says it produces "fresh, daring factual content and high-impact journalism."

Ossoff's wife, Alisha, is an OB/GYN physician at a metro Atlanta hospital.

Ossoff first rose to political prominence when he ran a tight race against Karen Handel in Georgia's 6th Congressional District race to replace Republican Tom Price in 2017 after Trump selected Price to be Health and Human Service Secretary. The race between Ossoff and Handel quickly became one of the most expensive in the nation's history, with Handel besting Ossoff in a runoff election, 51.78 percent to 48.22 percent.

Who is Shane Hazel?

According to Ballotpedia, Hazel was born in Alma, Mich. and served in the United States Marine Corps from 2001 to 2009. he earned a bachelor’s degree from the University of Georgia in 2006.

Hazel is the host of the Radical and Rebellion podcasts.

Most polls have the Libertarian candidate far behind Ossoff and Perdue, but he could have a major impact: should he pull enough of the vote to prevent either favored candidate from reaching more than 50%, it would force a runoff.

When would the Georgia U.S. Senate runoff be held?

Should no candidate receive more than 50% of the vote on November 3, a runoff between the top two vote-getters would be held on Jan. 5, 2021.

The state has seen record early voting and absentee voting numbers, which can easy voter gridlock on election day, plus it puts voting data into computer databases more quickly.

While some counties have started opening and processing ballots, the votes can't actually be tabulated until after polls close on election day, per state law.