The results of the race between Kelly Loeffler (R) and Raphael Warnock (D). 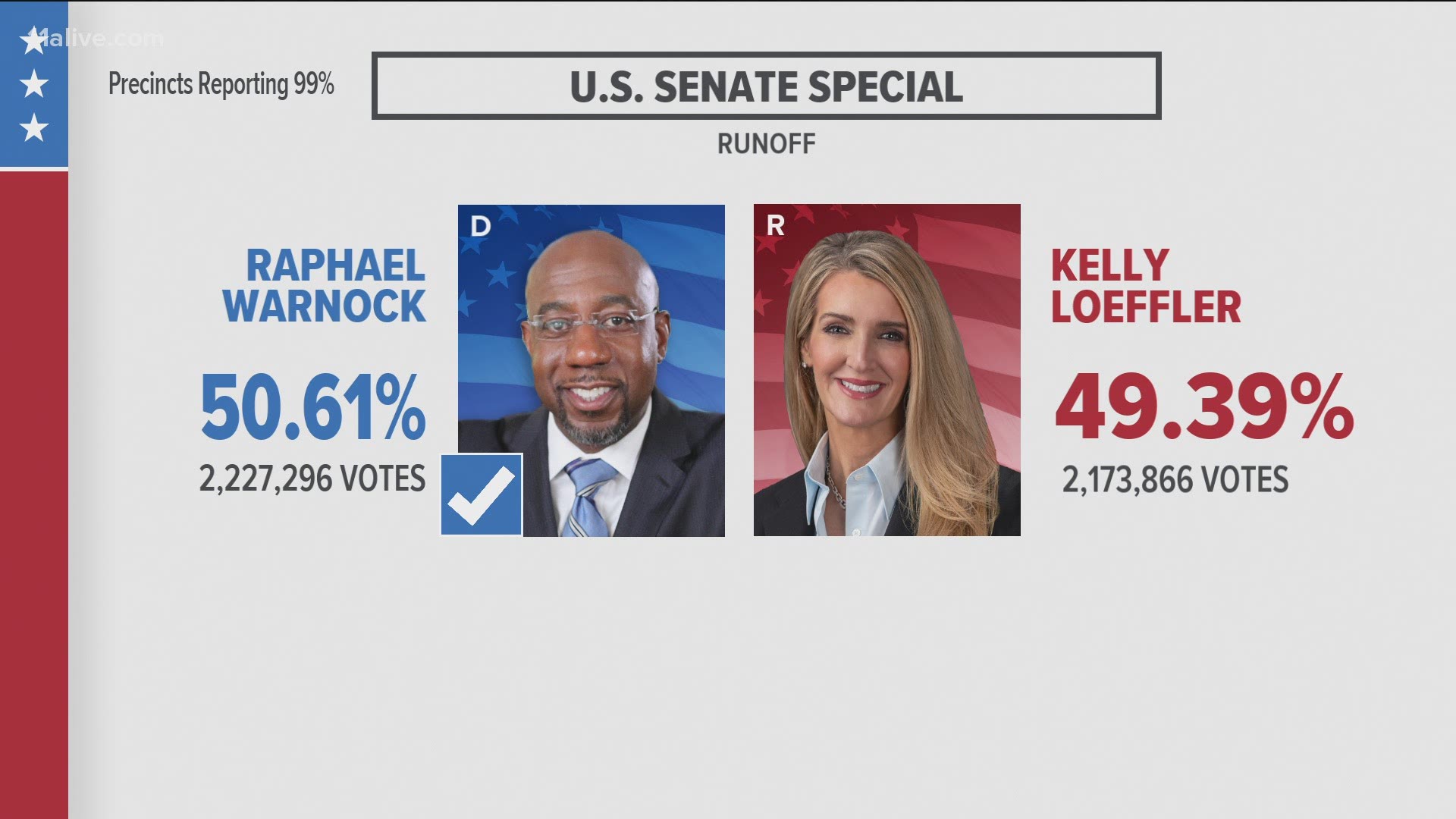 The runoff race to fill the seat formerly held by Sen. Johnny Isakson, who stepped down at the end of 2019 for health reasons, pited Republican Senator Kelly Loeffler, who Georgia Gov. Brian Kemp appointed to fill the seat, against Democrat Rafael Warnock.

Georgia was the only state with two U.S. Senate seats on the ballot in the general election in November and both required a runoff. Races go to a runoff when neither of the candidates gets a margin of 50% plus one vote. The two candidates with the most votes qualify for the runoff.

The other Senate seat was held by incumbent Republican Senator David Perdue. He’s facing Democrat John Ossoff in the runoff. See results for that race, here.

The polls closed at 7:00 p.m. and that's when results began to populate.

With such a high percentage of absentee ballots expected, full election results were not available on the evening of Jan. 5. Continue to check this page for updates.

Who is Kelly Loeffler?

Loeffler is a graduate of the University of Illinois at Urbana-Champaign and earned an MBA from DePaul University.

Loeffler moved to Georgia in 2002 and worked as chief communications and marketing officer and head of investor relations at Intercontinental Exchange.

While at Intercontinental Exchange, Loeffler met her husband, the company's CEO Jeff Sprecher.

In 2010, Loeffler obtained an interest in the WNBA's Atlanta Dream team.

Loeffler and her husband Sprecher are reportedly worth more than $500 million, making her the richest member of the Senate.

Who is Raphael Warnock?

Warnock grew up in Savannah, Georgia with 11 siblings.

Credit: Stephen B. Morton
Democratic U.S. Senate challenger Rev. Raphael Warnock waves to the crowd as he leaves the stage during a drive-in rally, Sunday, Jan. 3, 2021, in Savannah, Ga.

Warnock graduated from Morehouse College in Atlanta with a degree in psychology in 1991 and went on to earn a Master of Divinity degree from Union Theological Seminary in New York City. He became the senior pastor of Ebenezer Baptist Church in 2005.

Warnock has never held public office, and his run for U.S. Senate is his first campaign.

He has two children, a daughter, Chloé, and a son, Caleb.

11Alive News is your source for Election Day stories, identifying voter issues, fact-checking, and results. Bookmark this page for real-time election results, including absentee ballots and early voting, as they come in. To get an alert when the results begin to populate, download the 11Alive app and sign up for alerts.