A poll was commissioned by 11Alive for a view into Georgia's electorate ahead of President Trump's visit on Saturday. 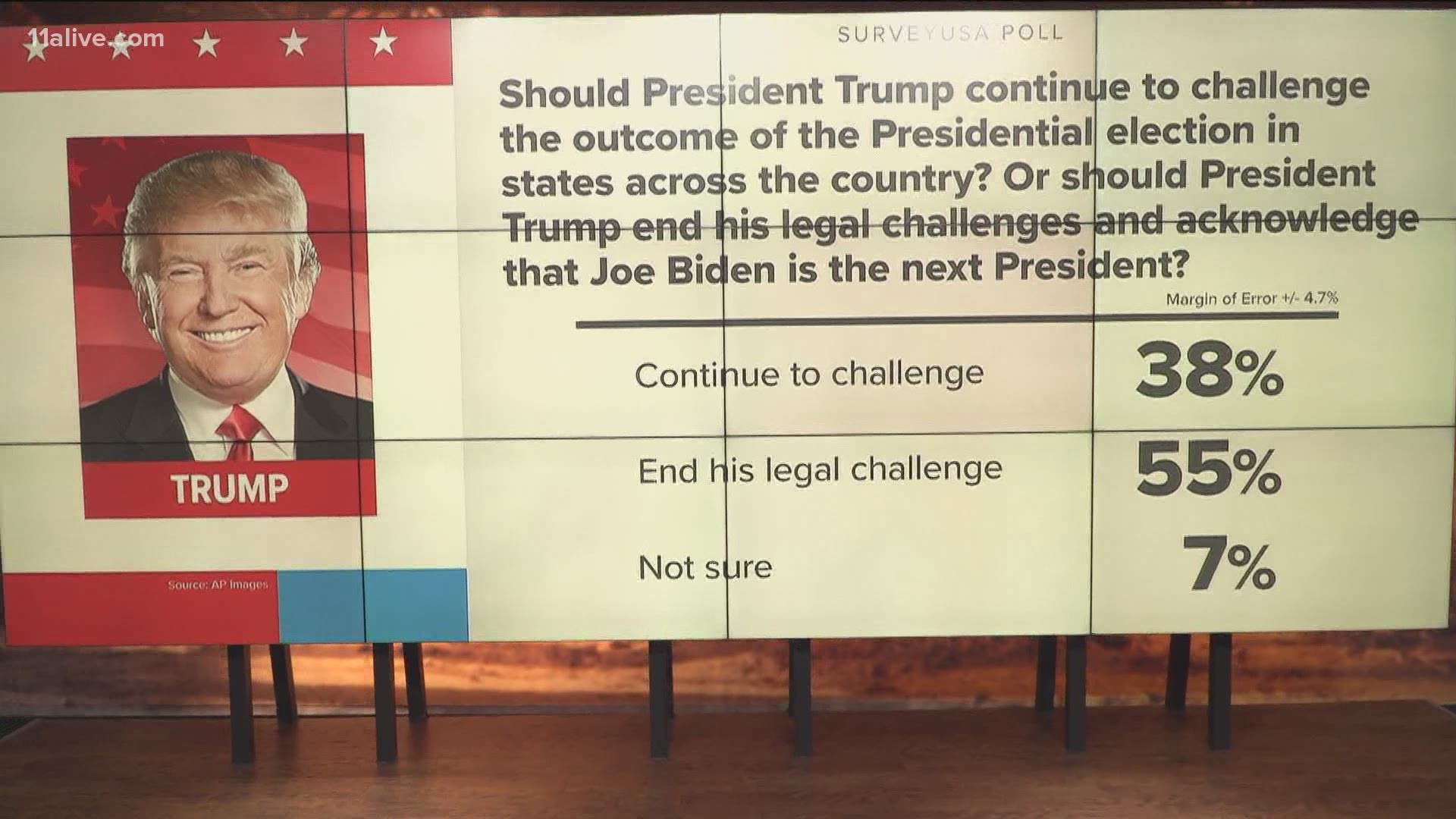 ATLANTA — A majority of Georgia voters believe President Donald Trump and his legal advocates should end challenges to the 2020 election, according to an exclusive poll commissioned by 11Alive.

The poll, in addition to providing insight on the state of the Senate runoff races, gave a view into the attitudes of voters in what has become one of the most contested states in the country.

Among Democrats, 80% had some or full confidence. As for instilling more confidence in the system, nearly two-thirds of respondents - 63% - said voters who submit their ballot by mail should be required to provide their photo ID in order to do so, a measure Secretary of State Brad Raffensperger has called for.

Perhaps concerning for Democratic challengers Rev. Raphael Warnock and Jon Ossoff, though, is that of those who said they weren't likely to vote in the runoffs, 43% were Democrats to just 33% who were Republicans. Among those Democrats, 20% said they didn't like the candidates and 24% said they didn't believe their vote maters.

And as Gov. Brian Kemp faces continuing criticism from President Trump - including in another tweet posted Thursday morning - his job approval rating stands at 43% of respondents saying they strongly approve or approve. Those who disapproved or strongly disapproved registered at 46%.

Sec. Raffensperger appears to be in a similar situation, with a general approval rating of 44%. His disapproval rating is far lower - 22% - though generally he still has a far lower profile than the governor, with 34% of people saying they were "not sure" about the job he is doing.

In January, Georgia will hold a runoff election for two United States Senate seats. Not everyone makes time to vote in a runoff. Which best describes you? (Credibility Interval: ± 4.4 pct points)

Should voters who vote by mail in the runoff election be required to submit a copy of their ID? Or not? (Credibility Interval: ± 4.5 pct points)

Do you approve? ... Or disapprove? ... Of the job Brad Raffensperger is doing as Secretary of State? (Credibility Interval: ± 4.7 pct points)

How much confidence do you have that votes in the January runoff election will be counted accurately? (Credibility Interval: ± 4.7 pct points)

Which of these best describes why you are not voting in the runoff?
(Credibility Interval: ± 11.9 pct points)

About this poll: SurveyUSA interviewed 850 voting-age adults representative of the state of Georgia Nov. 27 through Nov. 30. Of the adults, 717 are registered to vote. Of the registered voters, SurveyUSA identified 583 likely to return a ballot on or before the deadline.